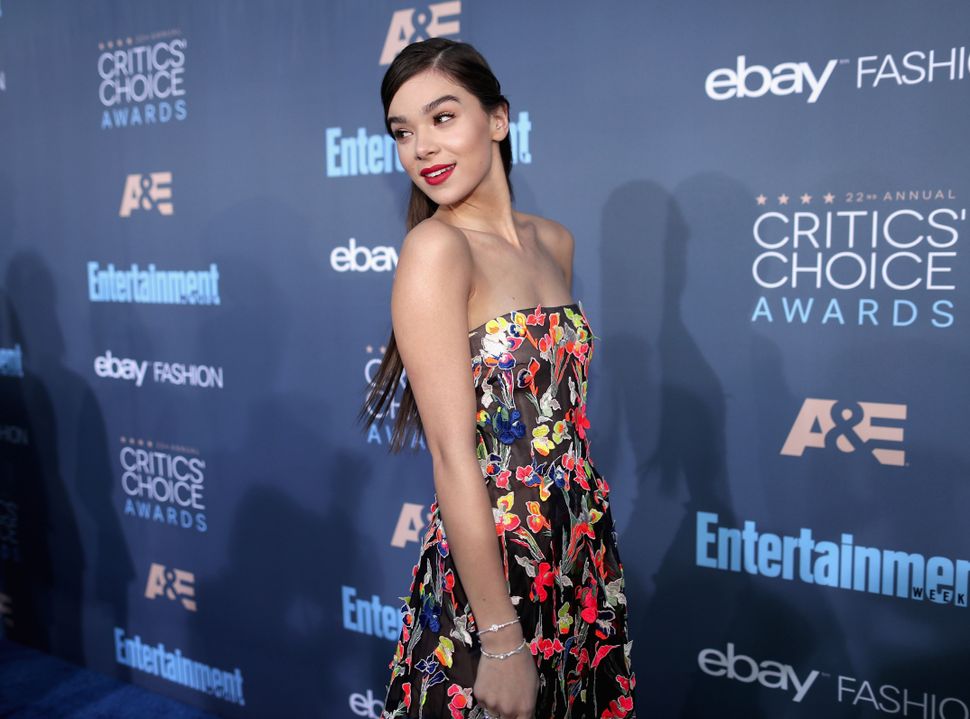 We have a lot of questions about the 2017 Golden Globes, presented this coming Sunday. Will Natalie Portman win Best Actress in a Drama for her performance in “Jackie?” How will the ceremony honor stars lost this past year, from Gene Wilder to Carrie Fisher? And perhaps most excitingly, will Hailee Steinfeld win Best Actress in a Comedy or Musical for her performance in “The Edge of Seventeen,” cementing her transition from astonishing newcomer — her debut performance in 2010’s “True Grit,” filmed when she was 13, earned her widespread accolades — to bona fide Hollywood star?

Whether or not Steinfeld snags a statuette, she’s certainly a force to watch. Here are 6 essential facts about the 20-year-old Jewish actress, singer, and model.

Steinfeld was nominated for a host of awards for her role in “True Grit,” including, most prominently, an Academy Award. Steinfeld didn’t win for Best Supporting Actress — the award went to Melissa Leo for “The Fighter” — but the nod helped her skyrocket to fame.

“Pitch Perfect” introduced us to the clarion pipes of Anna Kendrick; “Pitch Perfect 2” gave us Steinfeld. After auditioning for the Barden Bellas, the fictional a capella group at the movie’s heart, Steinfeld’s character Emily Junk was a valuable songwriter for the group as well as a singer: her song “Flashlight” clinched the group a world championship.

After the film was released, Steinfeld found herself seated next to Charlie Walk of Republic Records — a label that had worked on the original “Pitch Perfect” — at an event in New York City. Knowing the connection, she explained to Pop Justice, she struck up a conversation. Walk pulled out headphones to listen to some of her original songs, and the rest is history.

3) Her fans have a sleek nickname for her

It’s not quite as iconic as “T-Swift” or “Queen Bey” — yet, at least — but Steinfeld’s fans have taken to calling her “Haiz.” In a touching gesture, she used the moniker as the title for her debut EP in 2015.

Steinfeld has true T-Swift credentials: she appeared in Swift’s 2014 video “Bad Blood” in triplicate, appearing briefly as three futuristic-looking fighting badasses — and also, maybe, lab technicians? Watch the video for yourself and decide.

5) Her ideal Saturday night probably looks a lot like yours

For those who believe stardom to be a state of constant glamour, Steinfeld’s tastes might be a bit of a come-down, but we can’t fault her for them: in a July interview for iHeart Radio, she declared a love for Shake Shack cheeseburgers, sweatpants, and “The Big Lebowski.” Looks like we know how she’ll be preparing for her big night this weekend!

6) Her song “Starving” is one of iTunes’ most popular