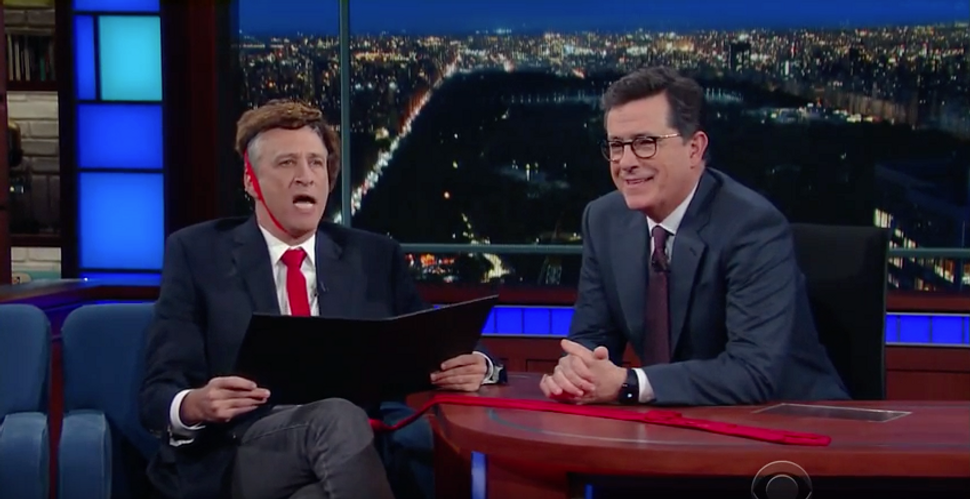 Jon Stewart made a cameo on “The Late Show with Stephen Colbert” Tuesday night, mocking Donald Trump’s flurry of executive orders and offering some sobering advice to those who oppose the president.

The comedian appeared on stage dressed as President Trump which, according to Stewart, pretty much just meant wearing a “super long tie and a dead animal on [his] head.”

Wig slipping down his face, Stewart read out a series of upcoming fake executive orders, which included forcing China to ship their Great Wall to the U.S., and decreeing that Americans learn an entirely new language.

“The new official language of the United States is bullshit,” Stewart said. “I, Donald J. Trump have instructed my staff to speak only in bullshit. And by the way, none of that ‘Sure, I’ll speak bullshit at work, but at home, I’m going to use facts and real information.’ No, bullshit all the time. Immersion, it’s the only way to be fluent.”

The bit turned serious when Stewart read out the president’s final executive order, which declared that Trump was “exhausting.”

“The presidency is supposed to age the president, not the public,” Stewart said. The comedian went onto call Trump’s eleven days in office “purposeful, vindictive chaos.”

He added, though, that there may actually be a solution.

“If we do not allow Donald Trump to exhaust our fight and somehow come through this presidency calamity-less and constitutionally partially intact, then I, Donald J. Trump, will have demonstrated the greatness of America,” Stewart said. “Just not the way I thought I was gonna.”