How An Image Of Donald Trump Golfing Became Political Artwork 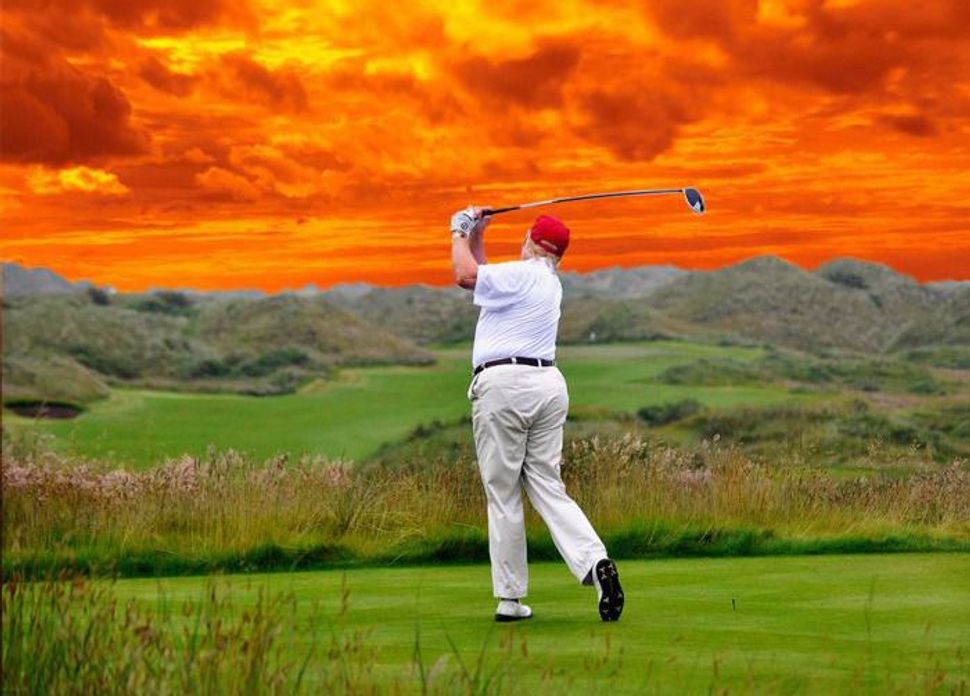 Back in 2013, Howard Stern asked Donald Trump to weigh in on Kim Kardashian’s body.

Fast forward four years later, and an image of Trump’s own behind sits on full, unapologetic display at Petzel Gallery in New York City. The print — aptly titled “Does she have a good body? No. Does she have a fat ass? Absolutely.” — features the president golfing against a post-apocalyptic landscape. His backside is offered up to viewers, as he tees off into a chaotic, orange sky.

For Jonathan Horowitz, the Jewish artist behind the print, the artistic fight against Trump has just begun.

Horowitz launched Daily Trumpet on Instagram last month, which features a diverse body of anti-Trump artwork from different artists. The pieces range from an image of a pocket-sized president’s daily briefing to a faux resist billboard in New York City. Horowitz plans to keep the art coming throughout the president’s time in office.

We spoke to Horowitz over email about art activism, creativity during the Trump era and the president’s behind.

Trump has made a mystery of his body, the way he always covers it up. When I came across the photo series that the golfing image came from, it was a bit of a revelation. Behind all of Trump’s misogynistic fat shaming is a very fat behind. I think it’s awful to make a person feel bad about the way they look, but Trump deserves it. And all I’m doing is re-circulating an image that’s already out there, and using it to tell a story. I changed the sky in the photo, like in a Magritte Empire of Light painting. There’s something apocalyptic about a golf course, with all of that unpopulated open space and the toxic chemicals that feed the grass. Decimation seems to be Trump’s fantasy — to create chaos and blow everything up.

Do you see your artwork evolving during Trump’s presidency?

Yes. I’ve made work in the past that has political content, but my conscious motivation has usually been more about making art then effecting change. I’ve always been skeptical of the term “political art.” But I’m thinking more now about what art can actually do.

How did you come up with the idea for “Daily Trumpet”?

After I came out of my post-election stupor, I felt an urgent need to do something. I had to then figure out what. Being an artist, it made sense to try and utilize whatever art related talents I have, and it seemed that other artists were wanting to do that too. I figured even artists who don’t make work that’s remotely political should at least be able to come up with a JPEG to post on Instagram. So I wanted to facilitate that, in the hope that one of those images, or the some total of them, might effect some kind of change. It’s a bit of an experiment. And a challenge.

Has any of the art you’ve been given really surprised you? Encouraged you? Made you laugh?

All of the above. Some people have made things that look like the work they’re known for, and others have sent in things that you’d never expect. It’s been fascinating, really.

How do you see art activism being important during Trump’s presidency?

Art can do a lot of things. It can motivate, inform, focus attention. It can function in concert with activism, like the work of Gran Fury, or it can come out of the blue, like on Instagram. And it’s everywhere. A block of text that gets laid out is art, a protest sign is art, the peace sign was a work of art. So, yes, I believe that art will be important. It’s always important. But it’s up to artists to determine how important it will be. That’s the challenge.

How An Image Of Donald Trump Golfing Became Political Artwork