Jared And Ivanka: Thy Neighbors Don’t Love You 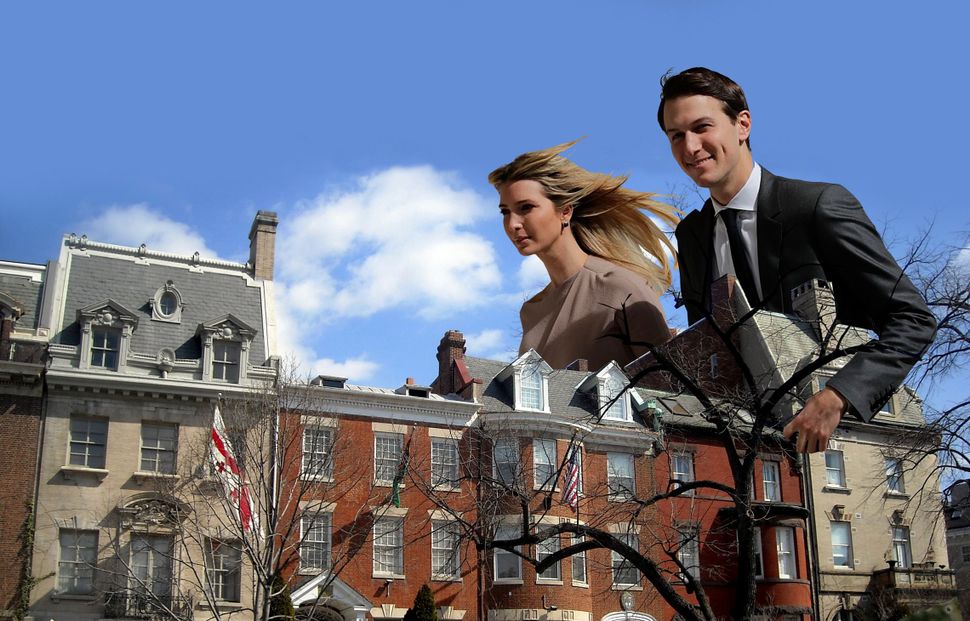 Ivanka Trump and Jared Kushner have gotten off to a rocky start with their neighbors in D.C.’s posh Kalorama neighborhood — including Fox News anchor Chris Wallace.

It all started when two “No Parking” signs sprung up in front of the Trump/Kushner residence, and Secret Service SUVs began clogging up the block.

Things got worse when an additional “No Parking” sign was posted in front of their neighbor Rhona Friedman’s house.

After sending out email complaints, the sign was removed from Friedman’s house — but the problems didn’t end there.

According to the Associated Press, neighbors also complained that the family has not been abiding by the trash pick-up schedule, and pointed out that Secret Service agents have been taking up the entire block — sometimes parking 10 cars at time. The agents also hang around outside, often speaking loudly.

“They’ve completely taken over the whole street — as if they have the authority!” Marti Robinson, who lives across the street from the president’s daughter, said. “It is every bit as disruptive as if a very active business was allowed to come into this residential neighborhood.”

In an email written to the mayor, Robinson added: “[the Trump/Kushner family] has truly ruined my peaceful enjoyment of my house.”

Grievances have also come down the pipeline from Wallace, who showed up to a recent neighborhood commission meeting to complain about the parking problems.

Whether or not these complaints are heightened because of political feelings is unclear.

“Maybe some of the upset has to do with politics a little,” she said. “I couldn’t say for sure, but I know that people don’t seem to be upset about Rex Tillerson’s situation. It’s much less intrusive.”

Tillerson has a collection of orange cones around his house to prevent non-government cars to park outside, while Barack Obama — who lives just around the corner from Ivanka and Jared — has Secret Service blockades on his block to deter non-residents from dropping by.

Kalorama is known as one of D.C.’s nicest neighborhoods, filled with stately colonial homes and many high-profile home owners. Previous residents of the upscale area include Herbert Hoover, Woodrow Wilson and Franklin D. Roosevelt.

Trump and Kushner are renting the six-bedroom house, which spans 6,700 square feet and includes five wood-burning fireplaces. Their landlord is a Chilean mining magnate who reportedly shelled out $5.5 million for the spread.

When asked for a comment on their neighbors’ grievances, a Trump aide relayed a light, if not completely specific, response from Ivanka.

“We love the neighborhood and our family has received an incredibly gracious welcome from our neighbors,” she said.

Jared And Ivanka: Thy Neighbors Don’t Love You