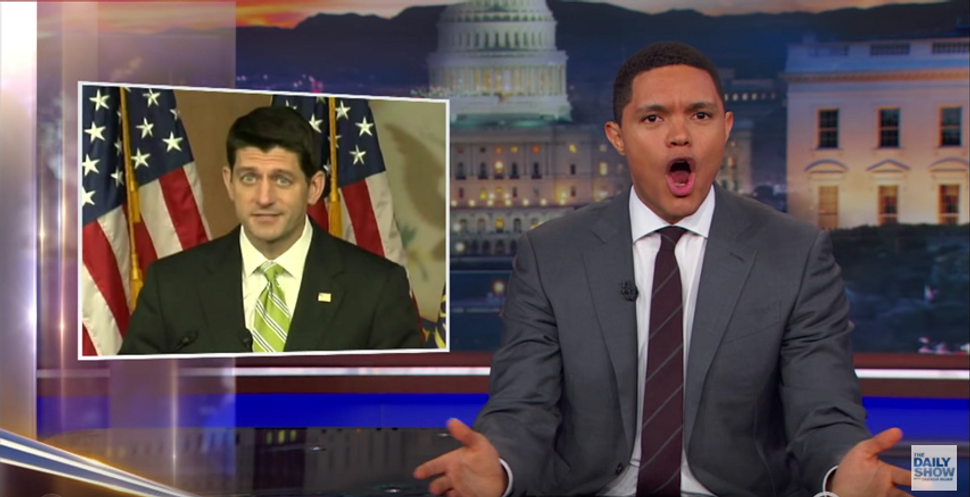 Image by The Daily Show/YouTube

“I don’t know Judge Jeanine, but if the president is telling me to watch…I’ve got to watch,” Noah said during his show Monday night. “I mean, I’m on a green card, I’m not trying to break the law.”

The segment Trump recommended turned out to be a full-on bashing of Paul Ryan for the failed healthcare bill, and a demand that the House speaker step down.

“Wow, that Fox News sh— was insane,” Noah said, after showing a clip. “In fact, it sounded just like North Korea’s propaganda news.”

The host then played a video of a speech from North Korea very similar in pitch, speed and general fury.

Noah also took Pirro to task for defending, and inadvertently insulting, Trump on the bill’s failure.

“I want to be clear, this is not on President Trump,” Pirro said in her segment. “No one expected a businessman to completely understand the nuances, the complicated ins and outs of Washington and its legislative process.”

That, Noah explained, was a little bit like a parent in denial.

“She sounds like a mom who’s blaming other kids for something her stupid son did willingly. That’s what she sounds like,” Noah said. “He’s the president, and now she’s there like, ‘Paul Ryan, you should know better, you should know my son doesn’t know anything about health care. Donny trusted you, he’s a slow boy.’”

Watch his full segment below: