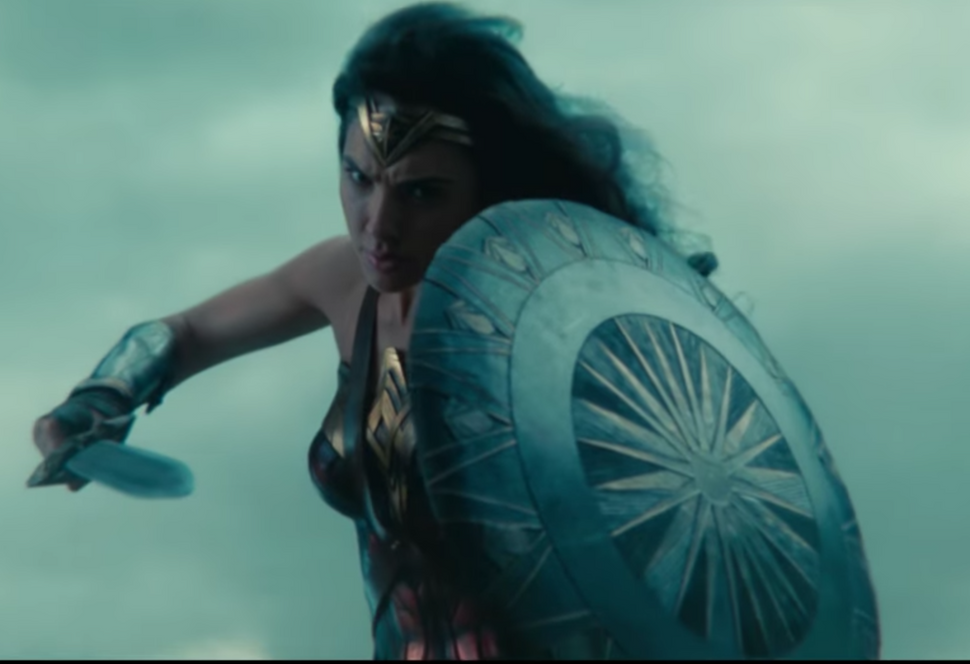 Despite Warner Bros. Studios’ desire to release a superhero summer blockbuster without telling anyone except a diet energy bar company, a new trailer for the upcoming “Wonder Woman” movie dropped last night. The movie, in theaters June 2nd, stars Gal Gadot as Diana, an Amazonian princess warrior who joins forces with the good guys to win World War I.

Wonder Woman is the most iconic female superhero. Gal Gadot is a former IDF soldier and the grandchild of Holocaust survivors. Here’s how we felt about watching her save the world:

-Okay false alarm, that was a window

-And now she’s climbing up a ladder in platform heels, so feminist baby steps here (literally)

-Is Baby Wonder Woman also Israeli? They let Gal keep her accent, and the actress who plays her as a child has an accent that’s somewhere between Kibbutznik and speech impediment. It’s adorable.

-“Be careful of mankind, Diana. They do NOT deserve you.” Diana’s Mom is all of our moms warning us about men.

-Climbing the wall by punching your arms into the bricks seems like an homage to The Cliffs of Insanity in “The Princess Bride,” but even better because the damsel in distress cliche is reversed here

-I am officially projecting if I see that wall as a symbol for walls everywhere, literal and metaphorical, right?

-Then again, this is a movie where the hero carries a “Lasso of Truth” that forces men to be honest, so it seems OK to read deeply into inanimate objects

-It IS an homage to “Princess Bride”! Robin Wright is in this!

-“How can a woman fight in this?” – Wonder Woman, referring to her long skirt. “Why does every female hero have to wear metal lingerie?” – Me, quietly trying to enjoy pop culture

-She bursts through the glass again!

-Just remembered Wonder Woman is directed by a woman, Patty Jenkins, and am now weeping softly into my iced coffee

-Gal Gadot served in the IDF as a combat trainer for two years and it SHOWS, dammit

-This trailer makes World War I look like a mixture of J. Gatsby’s birthday party and Lord of the Rings, which is very fun but I think probably inaccurate

-Like 60% of this trailer has been Wonder Woman running to put out fires. The female experience, am I right?

-Is that the female experience? The entire concept of this movie is giving me a feminist migraine

-Can’t wait to show my daughter this movie one day