‘Crazy Jewish Mom’ And Her Daughter Dish On Dating, Feminism And Mansplainers 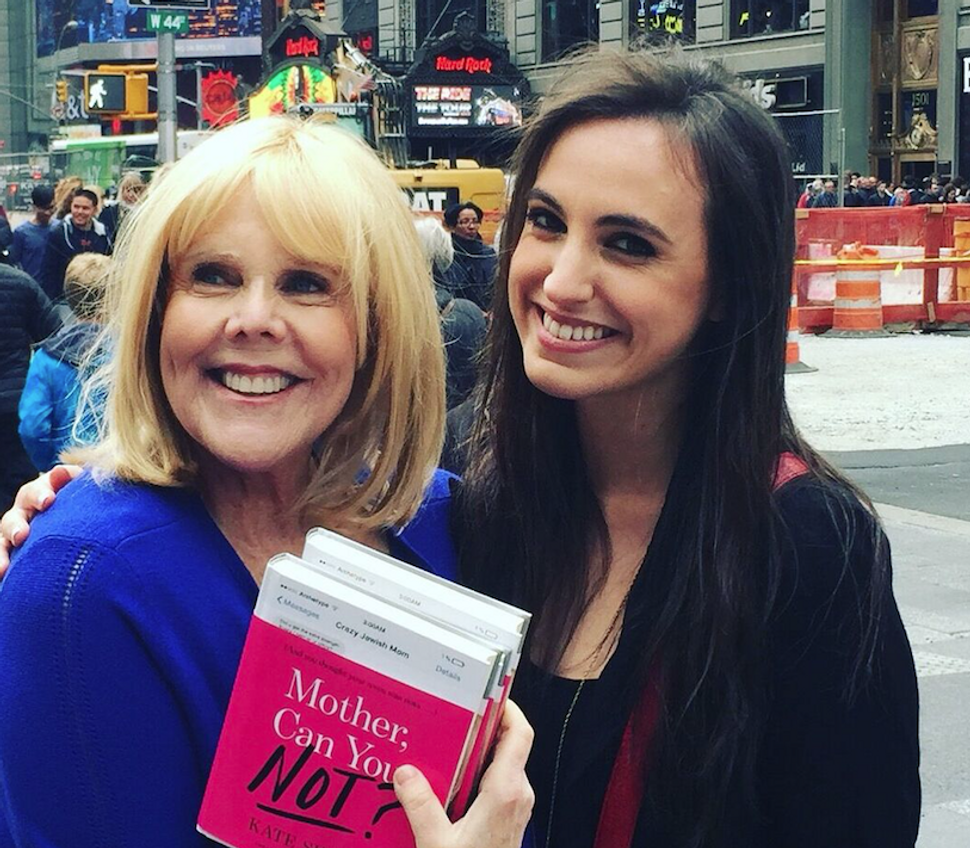 Because I use a tape recorder when I do interviews, I am able to state with authority that it took fewer than ten minutes for Kim Friedman, the inspiration behind the Instagram “Crazy Jewish Mom” to try to set me up with a nice Jewish boy named Zach.

A cultural institution in the Instagram age, “Crazy Jewish Mom” was created when Friedman’s daughter Kate Siegel decided to document the outrageous life advice her mother had taken to sending her. The account, which has garnered over 800,000 followers since it debuted in 2014, is almost more reality show than social media page. Through Kate and Kim’s real text conversations fans have gotten to know characters in the CJM world — Kim, her ever-harassed daughter Kate (“Spawn”), Kate’s “noncommittal” boyfriend of 3.5 years Jon (“SuperJew”), and even her Brooklyn apartment (“Death Trap”).

Kim’s texts stay within a range of themes: rings, eggs, Spanx, pizza, and suitors for Kate that Kim has met either in Starbucks or by impersonating her daughter on dating sites. Typical texts from Kim to Kate range from, “I can smell your eggs rotting form New Jersey,” to a panicked, “CRAP I FORGOT ABOUT THE BOILING MENSTRUAL CUP!” and the classic, “Go write at Columbia med school or law library. Would it kill u to meet a few cute Drs and Lawyers?”

My favorite is a reoccurring feature: full-length song parodies, like one of the song “There’s No Business Like Show Business,” re-written to be about Kegel exercises. (“There’s no vagina, like a tight vagina, like no vagina I know!”)

But since “Crazy Jewish Mother” debuted in November 2014 and was picked up by Buzzfeed two months later, the account has received ample criticism, arguing that it furthers nasty stereotypes about Jewish womanhood, that Kim is sexist, and that both women are pushing a worldview that is outdated and repugnant.

Even positive accounts of the women behind “Crazy Jewish Mother” portray Kim as kooky but ultimately well-meaning, like a relative whose antics you might tolerate for a few minutes at a bris before escaping to the dessert table. Is the “Crazy Jewish Mom” a harping shrew, or zany old crone? Child-harming chauvinist, or harmless old bat?

Fewer than ten minutes into our drinks it was clear that Kim is none of these things. She is explosively feminist. She is as funny as any comedian. She and her daughter both radiate a mixture of sweetness and the kind of Hollywood-ish beauty that makes you want to empty your bank account into the nearest Sephora. For two hours we talked period parties, parenting, and of course, Zach.

The moral of the story?

Listen to your Crazy Jewish Mother.

I caught up with Friedman and Seigel partway through their 40-city tour for Siegel’s book of essays on life with her crazy mom, “Mother, Can You Not?”

Crazy Jewish Mom and Spawn on: THEIR DEMOGRAPHIC

KATE (D): It’s a mix. On the Instagram it’s 90% vaginas. One of the most common comments is—”Crazy Jewish Mom? This could be Crazy Asian Mom, Crazy Catholic Mom, Crazy Mexican Mom, crazy-insert-whatever”. I think it’s resonated across the board.

KIM (M): One thing that surprises me is that I’ll go to Crown Heights, and I walk in a place where people are very religious, what were they, Chabad? And they said, “Oh my god, we love you”.

KIM (M): Do you see a ring on her finger? She’s still single.

KATE (D): Thank you, mother. When I was single, my mother was very, very concerned about that fact, so she asked me to sign her up for JMom.

KIM (M): I had no idea how to get on! But now I have a guy at the Apple store. I go to the Genius Bar — he knows why I’m there, and he helps me with it all, the catfishing, you know. He’s a friend now.

Journalist: What is your pickup line?

KIM (M): “What college did you go to? What’s your degree? Where are you working? Are you close with your family?”

Crazy Jewish Mom and Spawn On the Question: ARE YOU A FEMINIST?

KIM (M): Oh my god, yes. I marched in the very first women’s march in New York with the National Organization of Women carrying a sign that said, “Birth Control For Men.”

KATE (D): I happen to be a heterosexual woman who wants to get married and have children. These are things that I want. She’s always nagged me, and this is just the next thing to nag me about. It’s always directed at the things that I want. Like if I were a lesbian who wanted to be a visual artist it would just be a different set of nagging.

KATE (D): She had just moved out to LA and her agent had gotten her an interview for a big Hollywood action movie. He sat her down and said, “Listen, you’re not going to get this job because they’re not going to hire a woman to direct an action movie, it’s just not going to happen. But you should take the meeting because he’s a powerful executive.”

KATE (D): She threw me a party when I got my first period.

KATE (D): She forced my father to prepare a period themed menu, like red velvet cake and tampons on the walls.

Journalist: You slapped her?

Kate (D): Don’t you know about that? It’s a Jewish tradition.

KIM (M): You have to have a menstrual slap!

Crazy Jewish Mom and Spawn On the Question: WHAT DO YOU LOVE MOST ABOUT YOUR MOM?

KATE (D): All of the things she really advocated for, I’m incredibly grateful that I have in my life. I’m not going to say that your mother is always right, but she probably has really good ideas.

I also love that she is fearless. She really is. There are no holds barred. There is nothing that you wouldn’t do.

KIM (M): Are you dating anyone?

Journalist: Nothing has changed in the duration of the interview.

KIM (M): So then lets get to the point…would you like to have a date with Zach? What kind of guys do you like?

Journalist: Not “mansplainers”, if you know that term.

‘Crazy Jewish Mom’ And Her Daughter Dish On Dating, Feminism And Mansplainers