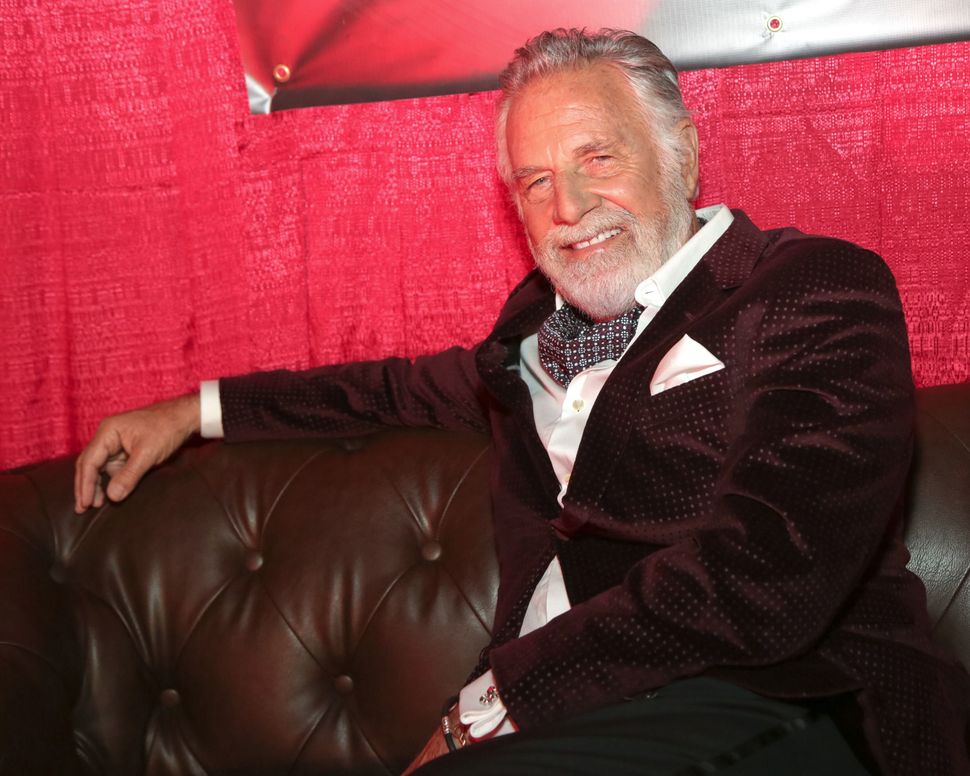 If you’ve ever watched a sports game on cable TV, you know who The Most Interesting Man in the World is. His passport requires no photograph. The circus ran away to join him. He can kill two stones with one bird. And so on and so forth.

He flashed across our screens for the better part of ten years and now I’m sitting with him at a café in Lower Manhattan. Or rather, I’m sitting with Jonathan Goldsmith, the man who played the iconic character.

Goldsmith, who was replaced by younger actor Augustin Legrand in 2016, is meeting with me to discuss his new memoir “Stay Interesting: I Don’t Always Tell Stories About My Life, but When I Do They’re True and Amazing” (Dutton), published on June 13th. The book is filled with interesting anecdotes from Goldsmith’s life but the actor doesn’t have much in common with the Latino debonaire he plays in the campaign that made him in a star. In fact, Goldsmith isn’t Latino at all. He’s a Jew from the Bronx.

When it comes to Goldsmith’s relationship to his faith, he says he’s not very religious. Still, having descended from what he calls “an eclectic group of old Bolsheviks,” his Jewish heritage is an important part of his identity.

“One of my great-grandfather’s founded a yeshiva,” says Goldsmith. “And many relatives kept a kosher home. But I wasn’t brought up that way. My household was not religious and I’ve never been a religious person but I like to think that I’m very spiritual.”

Goldsmith says he feels that religion separates people from one another and so he shies away from it. In the end, he says, what he loves most about Judaism is its philosophy.

“I didn’t go and fight in Vietnam but when the Six Day War happened, I felt a very strong desire to go do what I could,” says Goldsmith. “I’m proud of being a Jew.”

Goldsmith’s story is inspiring but it’s also, frankly, a little bit unbelievable, which I guess is appropriate for the man who played The Most Interesting Man in the World. After a 30-year acting career filled with ups and downs, near successes and devastating disappointments, Goldsmith had decided to spend the rest of his life in the woods, fishing.

That plan was dashed when he got a call one day from his agent, who said she knew of a role for which he would be perfect. It was this call that would change his life forever.

Goldsmith had nothing to lose. He said yes to the audition, packed a bag, and drove his old pick-up truck out to Los Angeles. Within the year, his very Yiddishe punim had become synonymous with one of the most famous commercial campaigns of the new millennium.

“There was a line of 500 men and they all looked like Juan Valdez, the coffee merchant,” said Goldsmith of the fateful audition. “I said, I’m all wrong for this.”

The producers of the commercial were looking for an actor with an improvisational background, which Goldsmith had. But his confidence wasn’t at an all-time high.

“I didn’t know if I still had it in me, if I could still make them laugh,” he says. “They asked me to tell them a story – any story – but it had to end with ‘and that’s how I arm-wrestled Fidel Castro.’”

Goldsmith concocted a wild tale about meeting Fidel Castro through a romantic tryst with Che Guevara’s sister. The bit was a roiling success.

“I had them laughing more and more,” says Goldsmith. “And in the end, they chose a Jew from The Bronx.”

Had Goldsmith been a household name when the commercials first debuted, there’s little doubt he and the Dos Equis brand would have been lambasted by the liberal masses for this casting move. He would have been accused of cultural appropriation and insensitivity, inevitably subject to the same criticism stars like Scarlett Johanssen and Emma Stone have faced when they chose to play characters of color.

But Goldsmith was relatively unknown when he got the part. Most people have no idea he isn’t actually Latino.

“I’m mistaken for Latino all the time,” Goldsmith says of his street encounters with fans of the commercials. “It’s a compliment.”

Goldsmith’s Jewish heritage is only one among many surprising revelations that come out in his book. Although the cover features the actor channeling his famous character – he’s holding a cigar and glass of straight whiskey and giving the camera a sultry gaze – the stories are unexpectedly poignant. He talks about his troubled relationship with his mother, his profound admiration for his father, and his many, many friendships.

Like “The Most Interesting Man In The World,” Goldsmith himself has led an interesting life. But unlike his character, he’s more than just interesting.

Goldsmith gets personal more than once throughout the chapters of his book. One such moment is when he tells of losing his virginity to a prostitute named Edie.

“Yes, I had lost my virginity and conquered that rite of passage,” writes Goldsmith. “But was the test of manhood the actual act of sex, a carnal experience that carried little meaning, or the intimacy and specialness that can come along with it? It would take years to discover that such an act, something so physical, was infinitely more real when paired with something emotional.”

I admit I expected Goldsmith to be a Jewish version of the Latino debonaire he plays onscreen – like an older Tucker Max, full of graphic stories about his endlessly fascinating conquests.

He is not, at all. Goldsmith has had his fair share of love affairs and there’s no shortage of reflection upon them in his book. But he’s also had other kinds of relationships with women – mentorships, friendships, partnerships.

This is what compelled me to ask the question that it seems every celebrity must answer nowadays. Could it be that “The Most Interesting Man in the World” – known for bedding thousands of women from the shores of every nation – is a feminist?

“Absolutely,” says Goldsmith. “He is and so am I.”

And with that, it’s time for Goldsmith to go. He has an important visit to make on his last day in New York City: Katz Deli, the famous Lower East Side kosher style restaurant long beloved among New York City Jews.