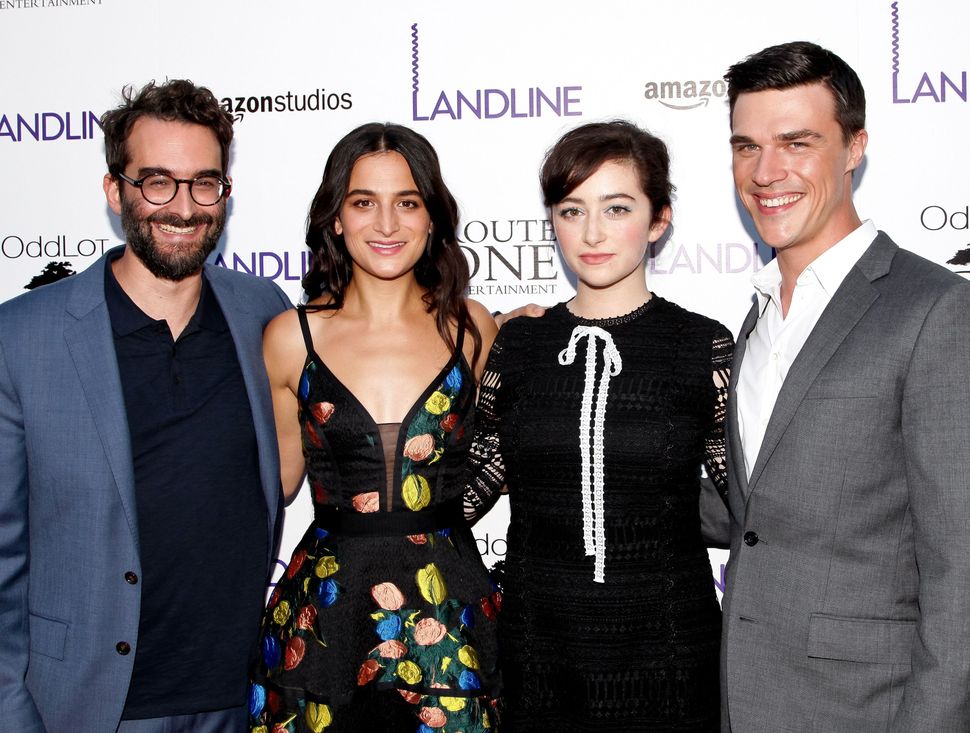 There’s a special place in hell for women who don’t support other women, said Taylor Swift once, and nowhere is this adage taken more seriously than here at The Schmooze. We aim to support women everyday, whether that takes the form of a tempered response to Emily Ratajowski’s boob claims or an article paying homage to the friendship between Kathy Griffin and her lawyer, Lisa Bloom.

Directed by Gillian Robespierre, “Landline” tells the story of two sisters who are brought together by the discovery that their father is having an affair. Jenny Slate plays Dana, a domesticated goody-two-shoes with anxiety about her engagement to a nice Jewish boy, played by Jay Duplass, who appears to be lightly sweating in every scene. Dana attempts to resolve her anxiety by piercing her eyebrow and demanding that her fiance say the word “pussy” in bed. When this doesn’t work, she has an affair with an old college fling and moves home under the guise of “being there for her sister.”

Dana’s younger sister Ali, played by newcomer Abby Quinn, is a Cool Teen™ who does heroin in the second scene and loses her virginity by the fifth. She’s a rebel who sacrifices her academic potential for a life spent sneaking out to clubs on weeknights. Her self-destruction is thrown off-course when she discovers love letters that her father has written to a mysterious “C” and suddenly, for once, something takes precedence over her need to immediately indulge every hedonistic whim.

Like “Obvious Child”, Slate and Robespierre’s first collaboration, “Lifeline” attempts to turn a potentially life-shattering event into comedy. Unlike “Obvious Child”, it’s not funny. Heavy on the twee and light on the gut-busting zingers, Slate relies almost entirely on deviations from her suffocating cuteness for laughs. By the end of the film, the audience has been beaten over the head with scenes of Slate and her family members dancing the pain away.

We get it. Spontaneous dancing is how white people heal.

The complicated nature of love and monogamy is something we all struggle to reconcile in our own lives and frank, honest stories can serve to remind us that we aren’t alone. But “Landline” fails to bring anything new to Hollywood’s favorite indie theme – physically and financially comfortable white families grappling with a lurking emotional dissatisfaction.

Slate’s character is sugar-sweet and, like sugar, will leave you longing for sustenance after consuming it. Like her affair, the eyebrow piercing eventually becomes infected and gross, leaving her with no choice but to return to how life was before it. Quinn’s character is black and white, the perfect trope of an angsty teen whose face blurs into the millions that came before her. Her suffering, like the suffering of most youths, can be attributed to hormones and a developing sense of the world as a place without meaning. But there’s nothing new or unique that draws me to either character. Rather, they seem like they’ve been neatly cut out of one indie film to fulfill the same role in this one.

In Robespierre’s defense, or at least in defense of whoever art directed the film, “Landline” does an immaculate job of transporting us back to 1995, the year the film is supposed to take place. From the CD that starts skipping in the middle of Ali’s first time having intercourse to the floppy disc on which Ali discovers her dad’s secret love letters, the movie will fill you with nostalgia for the days when everything wasn’t so damn easy. There are references to Blockbuster, a scene shot entirely in a CD store (do those still exist?), and even a quick cutaway to a person wearing a Native American headdress on Halloween — seemingly at total peace.

In the end, “Landline” seems to lack context, as if Robespierre and her writing partner, Elisabeth Holms, wrote the screenplay in response to a personal experience to which their audience isn’t privy. But for all of its shortcomings, the film does include one of the best cat puns of all time.

And for that reason alone, I can’t in good faith tell you not to go see it.