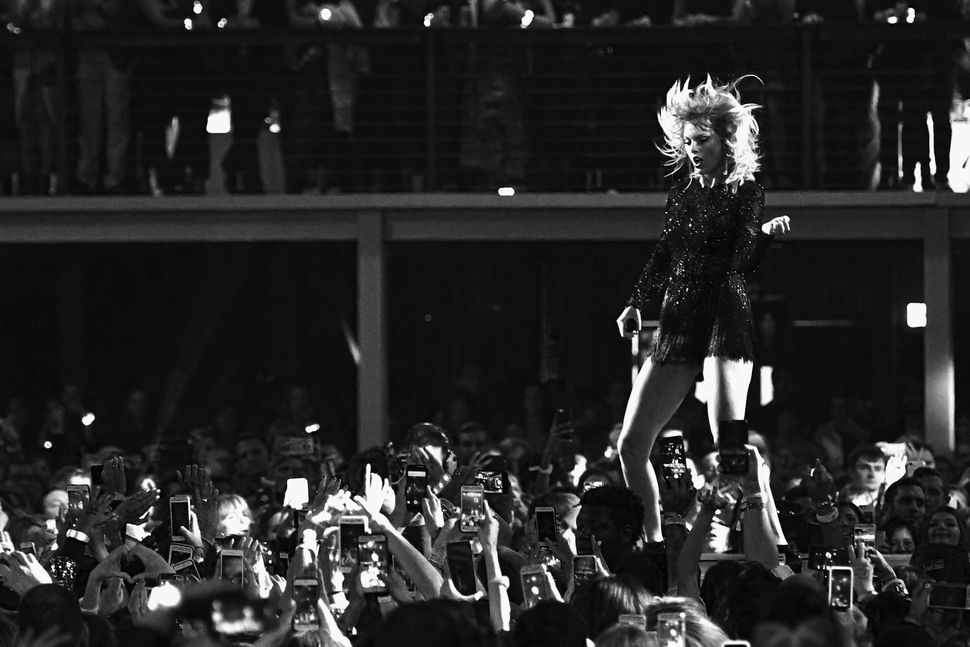 “And the serpent said to the woman, “You are not going to die, but G-d knows that as soon as you eat of it your eyes will be open and you will be like divine beings who know good and bad.” Genesis 3: 4-5

On Friday, August 18th, two-thousand and seventeen years into the common era and five-thousand, seven-hundred seventy-seven years by the Jewish calendar, Taylor Alison Swift deleted all of the content from her social media accounts.

“For My part, I am about to bring the Flood — waters upon the earth—to destroy all flesh under the sky in which there is breath of life; everything on earth shall perish.” Genesis 6: 17

She then “followed” pop-nemesis Katy Perry on Twitter, and then unfollowed every single person on each of her social media outlets.

“And I will bring darkness upon your land — declares the Lord G-d.

I will vex the hearts of many peoples When I bring your shattered remnants _ among the nations,_ To the countries which you never knew. I will strike many peoples with horror over your fate.” Ezekiel 32: 9-10

Finally, like a warning spark that streaks across the night sky preceding an intercontinental ballistic missile, Swift tweeted this to her 85.4 million followers: a soundless, flickering video of a snake coiling around itself.

At times of great existential uncertainty like this we must turn to our most ancient sacred texts and our Rabbis’ interpretations for wisdom.

Cultural associations with the snake, of course, are indebted to the “cunning” serpent in Genesis 3 who instigates Adam and Eves’ clashes with divine instructions. Kardashian and Swift were undoubtedly both thinking of this snake, however subconsciously, when they made their crucial social media “snake” posts.

Essentially what I’m saying is this — we have thousands of years of Torah commentary to explain Taylor Swift’s actions. Literally, thank god.

“Commensurate with its cunning and its greatness was its downfall — it was cunning, more than all, and it was cursed, more than all.” Genesis Rabbah 19:1

Could Rashi be predicting a future disgrace that will ensnare T-Swift once and for all, hoisting her by her own petard of cunning and bangs? Or is T-Swift well aware of Rashi’s prediction, and using her cunning to invert his warning and outrun her destiny?

Let’s take a look at what Rashi would say about our reaction to information delivered to us by snakes. Rashi says that when the Torah reads, “And the woman saw that the tree was good for food,” it is not that Eve can see any actual difference, but rather that she is hearing what she wants to hear:

“She understood the words of the serpent and they appealed to her; so she believed him” Genesis Rabbah 19:4

Like Eve, Rashi might say, we listen to snakes because they appeal to our deepest desires, not because they make good points. Taylor Swift, who appears to have embraced the identity of “snake,” has made a career of appealing to our deepest desires, not our higher consciences. The appearance of this video on the blank canvas of Twitter, a place where the public projects our basest values, suggests that once again Swift is about to make a play for our desires, perhaps in the form of a surprise album or world tour.

Is the snake good or evil? Is Eve as bad as the snake, or was she merely led astray? Who is responsible for human transgression, the transgressor or the creature who tricked her?

The Rabbis, naturally, do not agree at all on any of these questions. But Rabbi Pinchas Eliyahu Horowitz of Vilna had something to say about it. Anyone, he wrote in Sefer haBrit part 2, chapter 12, who takes this passage of Genesis literally is a “fool.”

And Taylor Swift is nobody’s fool.

“Did you sell me out for a fool? After you held me is that just what you do? What did you need from me? Tell me” Taylor Swift, “Tell Me”