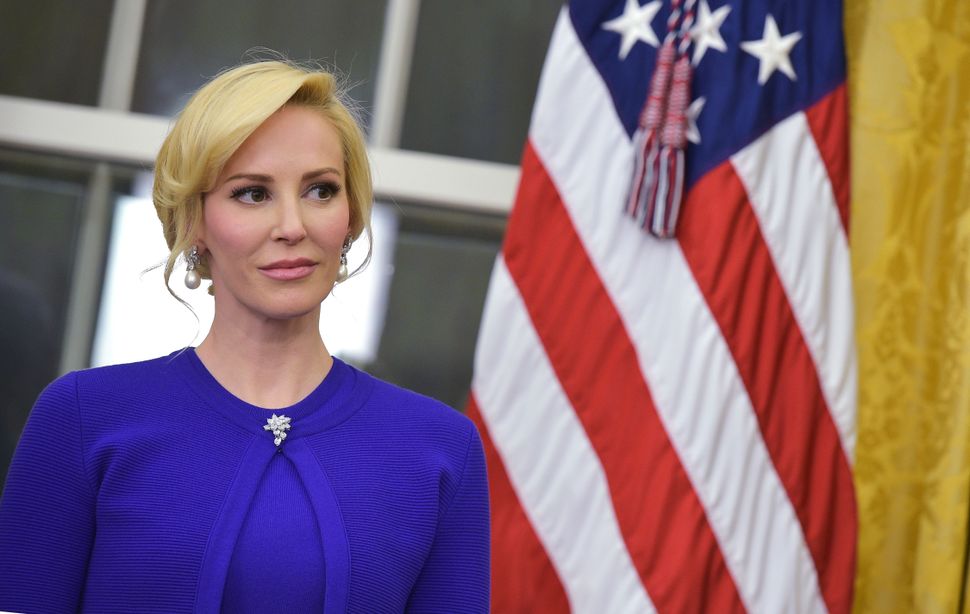 Louise Linton, to be sure, is nobody’s angel. While the act she’s primarily known for, marrying Steve Mnuchin, is one of great charity, the Scottish actress/model/White Savior has committed her fair share of misdeeds: publishing the photographs of HIV-positive children without their permission, writing a book about the gap year she spent in the “darkest Africa,” and, most recently, tagging her Hermès scarf in an Instagram photo.

This last sin was simply too much for one of Linton’s Instagram followers to handle. In the comments section of the fated Instagram post, which has since been deleted, a user by the name of “jennimiller29” wrote, “Glad we could pay for your little getaway. #deplorable.”

Perhaps Louise Linton hadn’t yet had her morning coffee. Perhaps her husband had just sneezed on her for the eighth time that morning. Whatever the reason, Linton, the wife of a politician who may one day become president if everyone who comes before him goes blind from staring into the sun, reacted thusly:

Cute!….Aw!! Did you think this was a personal trip?! Adorable! Do you think the US govt paid for our honeymoon or personal travel?! Lololol. Have you given more to the economy than me and my husband? Either as an individual earner in taxes OR in self sacrifice to your country? I’m pretty sure we paid more taxes toward our day “trip” than you did. Pretty sure the amount we sacrifice per year is a lot more than you’d be willing to sacrifice if the choice was yours. You’re adorably out of touch. Thanks for the passive aggressive nasty comment. Your kids look very cute. Your life looks cute. I know you’re mad but deep down you’re really nice and so am I. Sending me passive aggressive Instagram comments isn’t going to make life feel better. Maybe a nice message, one filled with wisdom and hunanity [SIC] would get more traction. Have a pleasant evening. Go chill out and watch the new game of thrones. It’s fab! 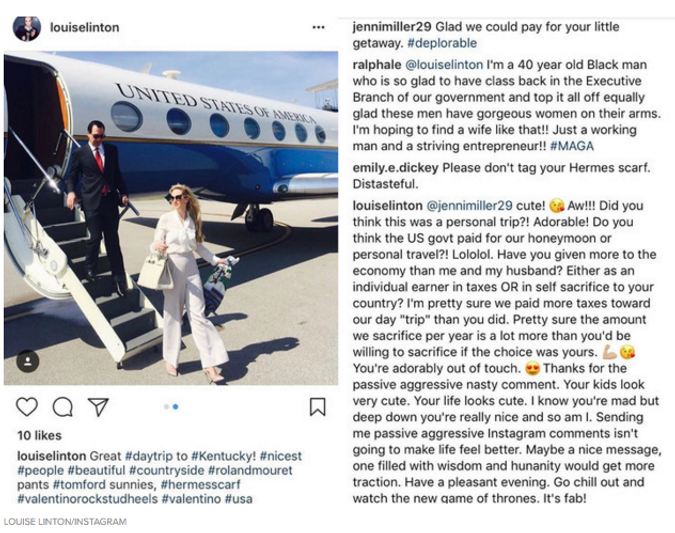 I am not a book reviewer and this Instagram response is not a book but if I were and if this was I would give it four stars and say of it:

Meandering at times, at others succinct, Louise Linton has produced a work that no one can deny is saying something, even if we’re not sure what. She moves from sarcastic to empathetic and back with all the promise of a young David Foster Wallace or, if I might, the author Virginia Woolf might have become had circumstances been different. In the end, Linton doesn’t spoon-feed her audience a conclusion (except when it comes to the new “Game of Thrones). On important matters, like taxes, self-sacrifice, and the economy, she lets us decide for ourselves where we stand.