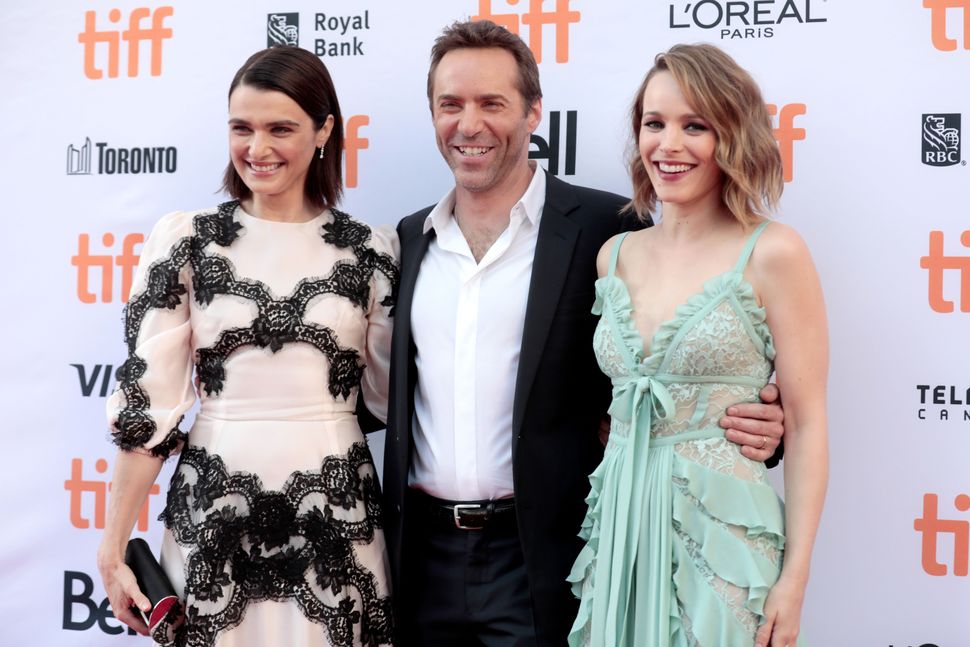 She was a Rebbetzin. She was a Rabbis daughter. Both were played by women named Rachel. In a new movie, they fall in love and HAVE SEX.

Weisz, looking haggard-chic, is a classic RK — she has fallen so far off the derech that the cars are actually on the other side of the road — she’s escaped to a liberal life in New York City. She returns to Hendon after years of estrangement to sit shiva for her father, and is temporarily taken in by her former bestie Esti (Rachel M,) and Esti’s husband, Rabbi Dovid. I am extremely sorry to report to you that there is not, to my knowledge, a “fraught and emotionally nuanced” threesome in this movie. But there is always the possibility of a sequel.

Rachel M. wears a truly perfection, straight-outta-Williamsburg wig and has been having lustless double mitzvah Shabbos sex with her Rabbi husband (Alessandro Nivola, whose family, like Weisz’s, are survivors.) Our very own Regina George having obligatory Shabbos sex! This is exactly why Jews invented movies.

We learn that the Rachels were caught doing some kind of sex thing (reviews are disappointingly vague on this!) in high school, and the entire community has been doing lashon ha- interesting about it this whole time. The Rachels do the only thing you can do when you and your childhood best friend want to have passionate sex without your husband and community barging in and demanding that you put your wigs on and observe your marriage vows and your father’s sheloshim : Leave for a hotel sex vacation.

At risk of being reductive (as if someone who reduces a carefully told love story to a single sex scene could ever be reductive!) this movie seems like “Brokeback Mountain” with wigs instead of cowboy hats. Doff your kippah, kiss your tzitzit “as if discovering water after a long and lonely existence of being parched” (that’s the gross way Vulture put it,) and thank Naomi Alderman, who wrote “Disobedience,” the book the movie is based on.

And see “Disobedience” as soon as it is released.