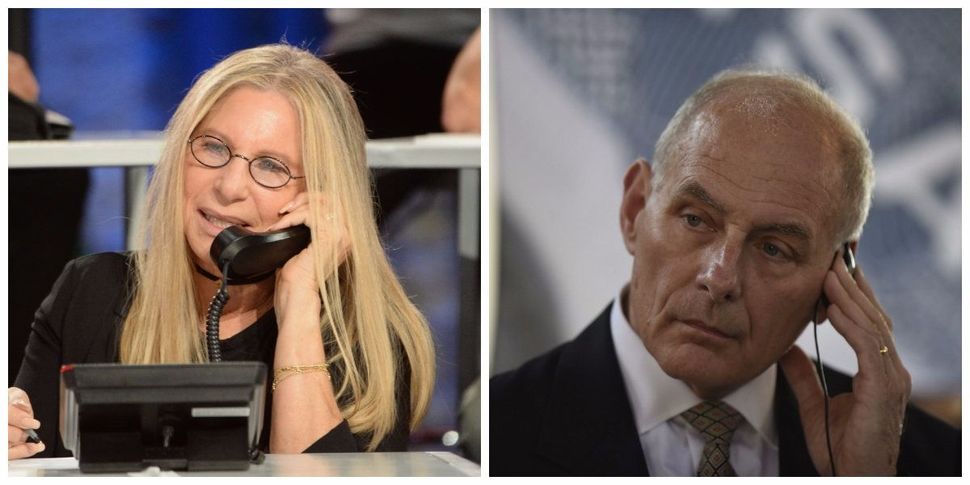 The golden goddess and tireless democrat was harassed by a John Kelly parody Twitter account on Friday. Now they might be dating. Let’s look at how this story developed.

1.Barbra Streisand, a true worker for people’s rights who also has a room in her house dedicated to her own awards (she contains multitudes) tweeted at the White House chief of staff on Friday, suggesting that he gag President Donald Trump.

Barbara Streisand can’t you update your Twitter photo to show how you really look at 75? https://t.co/3lAhiikfI7

It’s almost like a common way to get a woman to stop voicing her opinion is to remind her that her relevance is directly tied to her hotness, even if she has had 14 multi-platinum albums! Don’t bother releasing one number one album a decade for the past six decades if you’re planning to age, Barbra! If you’re not careful, a government employee’s fake Twitter account won’t want to have sex with you.

You’re absolutely right! I was 73. Have just posted a new one for you… taken earlier this month https://t.co/KDKDc7tn0O

Now, be honest: there is quite a bit of will-they-won’t-they tension between Barbra Streisand and this General John Kelly parody account. You and I both know that the American people would watch a gender-bender version of “Her” where Barbra falls in love with a cyberbot/unhappy middle-aged parody-account maker, or perhaps with John Kelly himself. Barbra is a passionate voice of reason on the left. John Kelly is a respectable patriot on the right. Together, they are 142 years old and hotter than ever.

Spike Jonze, you know what to do. Make America watch cinematic fan fiction about Barbra Streisand and either John Kelly or a digital John Kelly impersonator again.