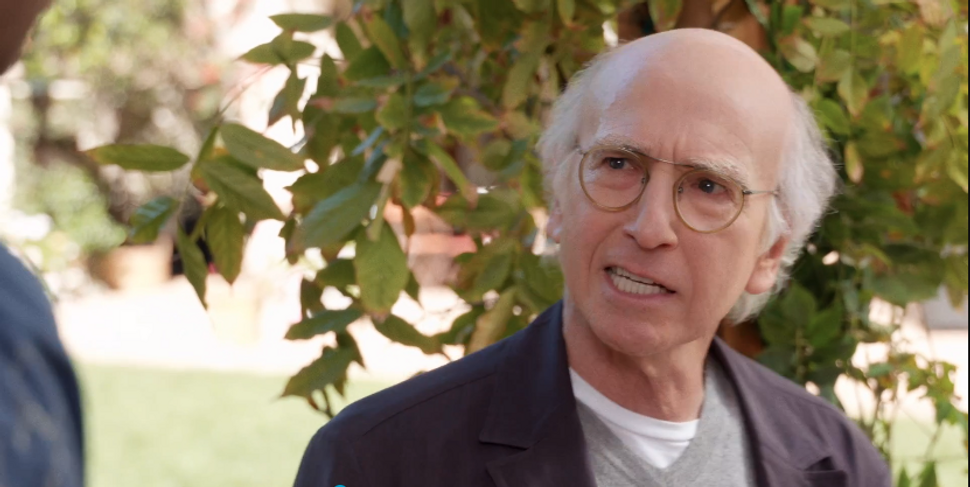 Since the last time we saw “Curb Your Enthusiasm,” a lot has happened. Trayvon Martin. Obergefell v. Hodges. Donald Trump. And in that alternative universe the (semi-)fictional Larry David resides in, time has taken its irreversible toll as well — he’s a little grayer, a little balder, Ted and Mary are separated (and haven’t seen Larry in ages, apparently), Jeff’s daughter, Sammy, is getting married, and Cheryl is raising awareness for genital mutilation (in which Larry, on friendly terms, cavalierly boasts to his ex-wife that he’s “deadly focused on the clitoris”). The episode feels like a reunion of old pals negotiating the head-shaking past with what today presents.

Before Sunday’s premiere, it was an open question whether Larry, the misanthrope “totally devoid of anything that’s remotely caring or empathetic,” as Richard says, could adapt to the changing times and increasing sensitivities of today.

On Sunday, Larry David answered that question with a shrug of the shoulder.

In Curb Your Enthusiasm’s season 9 premiere, “Foisted!”, Larry David’s life is pretty much what it was when we last saw him — back in L.A., he’s still merrily divorced from Cheryl and social responsibilities, living with Leon. Jeff is still his manager (and Susie still calls him a c***sucker), he and Richard Lewis are still the oldest of frenemies, and he’s still souring all human interactions that come his way.

We find Larry in 2017 continuing to subvert social expectations with vintage results. When Larry meets a lesbian woman with short hair and wearing a tie and vest, he doesn’t hold the door for her, believing she wouldn’t be the “type” to want the door held. The social assassin does his thing when he ruins the woman’s gay wedding after he tells the butch lesbian — who is the bride-to-be — that he’s “not really getting bride vibes” from her, insisting she and her gender-normative groom have their wedding roles mixed up.

And so, Larry immediately confronts the tension of the changing times by “interfer[ing] with the nuances of a lesbian wedding.” If time is flowing like a current, Larry is on the shore indiscriminately commenting on everyone passing by while eating beef jerky.

Events begin to unfold when Larry reveals to Jeff his latest project, a musical about the Ayatollah issuing a fatwa to Salman Rushdie. Executives swarm to his idea, and Larry goes on Jimmy Kimmel to introduce the project to the public, but everything goes awry when he lampoons the Ayatollah by impersonating the cleric and jokingly remarking — among other things — that the Ayatollah is probably someone who uses Waze, loves granola, and “has a small harem, a fetish for redheads, and twice a year goes to Ireland on a harem shopping spree.”

Something curious happens next that we never really saw in previous seasons — his actions have “real world” consequences. Following his Kimmel appearance, the Ayatollah issues a fatwa on Larry, ending all executives’ interest in the project and sending Larry into a panic now that he’s been “fatwa’d” and subject to death.

Though in step with the “Curb” of yesteryear, there’s something about this entire chain of events that’s rather strange to behold. Watching in-the-show Larry David go on Jimmy Kimmel’s show — only a few weeks after the real-life Larry went on Kimmel — reflects how time hasn’t simply changed the show, but how we view the show itself. Gone for so long, us viewers have processed and placed “Curb Your Enthusiasm” into the annals of comedic history that means the show’s legacy can’t be ignored.

Larry David acknowledges this development in the premiere by making art imitate life and merging fiction with reality more than previous seasons ever did. The universes have converged, and Larry must reckon with that — as horrified he is.

Through this vehicle of metafiction, Larry David brilliantly manages to reintroduce his seminal comedy to a brave new world. By making the big things small, and the small things big, the constraints of time become a mere plaything for Larry to grapple with those changing social expectations. Like in years past, Larry David confronts those awkward social questions he doesn’t quite know the answer to — should I hold the door for a woman? Or a woman with a certain “vibe”? — that make us contemplate our own social behavior while deploring his.

In the show, Larry’s always known the vocabulary of social interactions, but he can never quite string a normal sentence of it together. Now, the world’s introduced new vocabulary words like “intersectionality” for this old geezer to confront, and he seems bound to disrupt the social conventions of this new era as this season unfolds.

When Richard Lewis’ parakeet dies, Larry texts him, “Sorry about your bird … the good news is I’m still alive.” For Larry, good news isn’t about change or progress. Good news is the absence of bad news. Maybe that’s why he did so little all these years — if nothing happens, then nothing bad has. Which is… good. Pretty, pretty, pretty good.