Why do we fantasize about life during the galactic civil war in a galaxy far away? Would it really be worth it to live under the fascist Sith regime, just for the chance to train with Yoda and marshall the force?

And why do so many of us harbor dreams of receiving our Hogwarts letters, when life with wizards mostly involves a violent struggle to defeat a fascist supremacist? Is the allure of magic broomsticks and Dumbledore really enough?

Just as Luke Skywalker and Harry Potter did, we live in a time when evil threatens to overpower good and the struggle to achieve basic peace and equality seems impossible.

And like Harry Potter, we have powers the Dark Lord knows not. We live in a time with out-of-control gun violence, unparalleled natural disasters, and the constant threat of fascism. But we have heroes too. We have Stephen Sondheim. And we have Lin Manuel Miranda.

With Miranda’s new anthem, “Almost Like Praying,” he set out to create a benefit song that people could dance to, one that doesn’t feel like “homework” to listeners. Miranda, who didn’t hear from his family in Puerto Rico for several days after the hurricane, sampled from “Maria” the Stephen Sondheim and Leonard Bernstein song from “West Side Story,” for his song.

“I took a sample from the song ‘Maria’ to flip it,” Miranda told USA Today. “To literally flip the sample the same way we’re trying to flip the natural disaster into something positive.”

Within one week, Miranda marshalled over 20 of the world’s biggest Latin performers — Jennifer Lopez, Luis Fonsi, Rita Moreno, Joell Ortiz, Marc Anthony, Camila Cabello, John Leguizamo, and Gina Rodriguez, to name a handful — to sing the names of the 78 towns in Puerto Rico in studios around the world. Miranda says he was in the studio with Moreno when she asked, “Do you have Gloria Estefan?” Miranda told the star he didn’t have Estefan’s number. Moreno dialed her up, and the next night Estefan joined them in the studio.

PJ Sin Suela was one of the many artists asked to join in the song, but Miranda didn’t immediately hear back from the rapper for several days. Sin Suela explained that he was in Puerto Rico and had been without power for several days. He recorded a verse but lacked the bandwidth to send it in an email. But the verse found its way back to Miranda through Estefan, who was traveling to the island on a relief mission. She returned with the memory stick of music, triumphant.

“Everyone cried, we were in tears,” said Miranda. “We screamed, ‘We got this verse out of Puerto Rico! That gives you an example of the effort and the cooperation involved.”

And where were Ricky Martin and Daddy Yankee, two of the biggest names in Latin music? Both performers were so busy with relief work in Puerto Rico that they were unable to record. “I’ve never seen so much mobilization in my life,” said Miranda.

You can watch the music video for the song below. To help send proceeds from the song to the Hispanic Federation UNIDOS Disaster Relief Fund, be sure to pay to download it. Then you can have this once in a lifetime Leonard Bernstein/Jennifer Lopez collaboration in your life forever and help fellow Americans access fresh water. Luke and Harry, eat your hearts out. 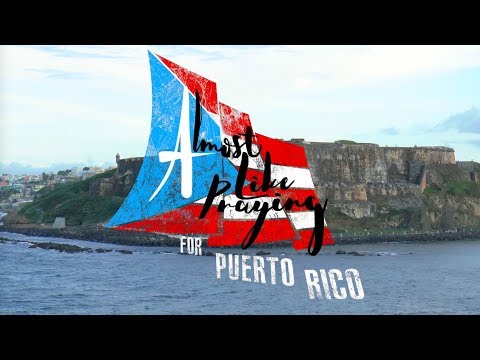