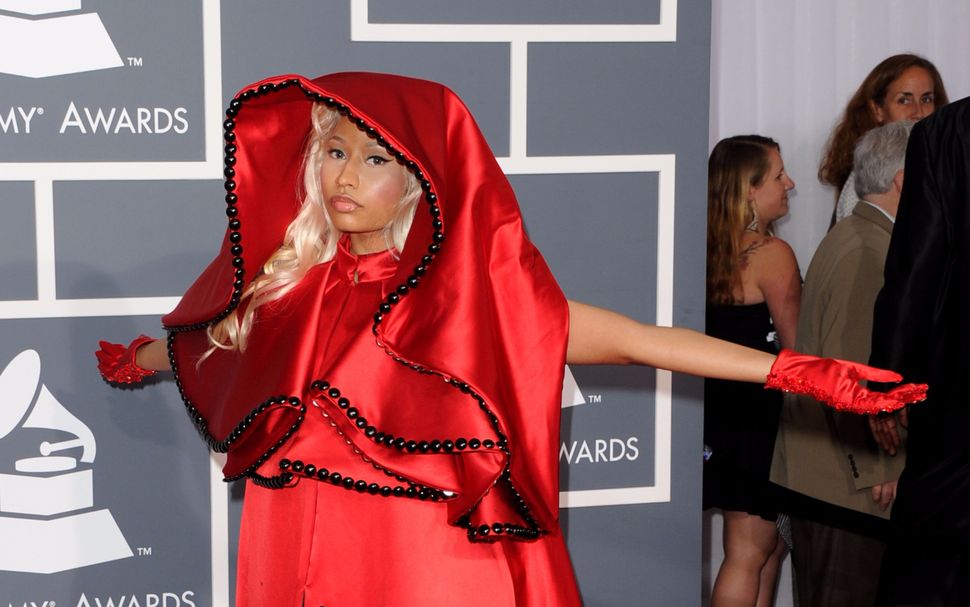 Nicki Minaj is like a beautiful, genius, bright pink onion — peel back her layers, and there’s always more underneath. (Nicki Minaj is nothing like an onion, but I’m panicking.)

Did everyone know that Nicki Minaj has been majorly influenced by Jewish cultural figures?

Have tweens been laughing at me all this time for not knowing?

Minaj, the best-selling female rapper of all time, is the kind of celebrity who makes cameos in the public’s nightmares as well as our dreams. Minaj takes on various alter egos, including, as she explained in a recent New York Times Magazine cover interview with Roxane Gay, a “male persona, Roman Zolanski, who is a slightly exaggerated version of Minaj herself” and “the sexually explicit Nicki Lewinsky.” These characters have existed since the earliest days of Minaj’s rap career.

Kindly tell me, what was the point of attending Hebrew school through Confirmation if this wasn’t going to be clearly explained?

Nicki Minaj at the 2012 Grammy’s as Roman Zolanski

Roman Zolanski famously appeared at Minaj’s 2012 Grammy performance (a five-minute musical exorcism that is like a Disneyland live show combined with a regional-theater production of “Sweeney Todd”) and informed Minaj’s second studio album, “Pink Friday: Roman Reloaded.” He gives his voice to major Minaj verses on songs like “Monster” and “Bottoms Up.” Is he a sick twist on Roman Polanski? The Internet is strangely unhelpful on this point. According to Paper Magazine Roman Zolanski is a “gay, paranoid, and violent male alter-ego” with an overbearing British mother. He is Minaj’s favorite alter-ego. Is he Jewish? In a rare, printable Minaj lyric, Nicki-as-Roman raps, “These b**ches should be worshippin’ me in the synagogue!”

Monotheism aside we would, Nicki!

Now, who in the mysterious Jewish hell is Nicki Lewinsky? Like the stereotype that Jews control Hollywood, the cultural association between Jewish women and unbridled sexuality usually turns out to be less of a compliment than we might hope. Nicki Lewinsky, a raunchy, sex-focused alter-ego Minaj used primarily before her mainstream breakout, is acknowledged to be a reference to Monica Lewinsky. More than 128 songs reference Monica Lewinsky; 12 of those songs are by Nicki Minaj. And unique to almost all other Lewinsky-rappers, Nicki’s Lewinsky references suggest sexual power instead of sexual shame.

Add this to the fact that in 2014 Nicki Minaj dated a Nice Jewish Boy named “Grizz Lee” who helped her make a music video that has strong illusions to Nazi imagery, which she then apologized for.

Nicki Minaj — confusing, arousing, offensive, and fascinated by the Jews. We won’t be worshippin’ her in the synagogue, but we will be talkin’ about her over kiddush luncheon.