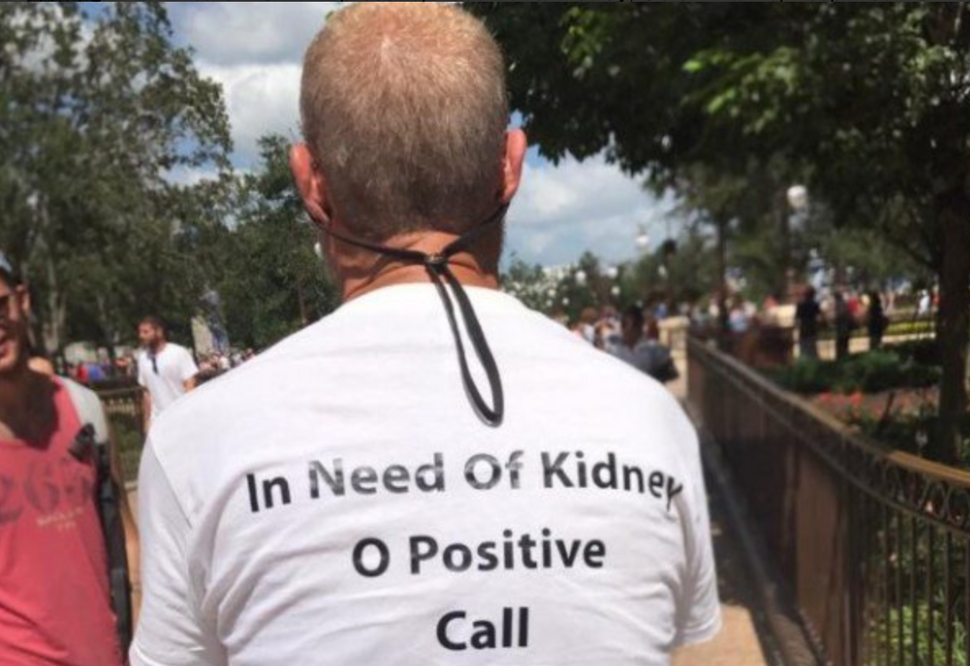 They call it The Magic Kingdom for a reason. When Robert Leibowitz, the 60-year-old single father of five who has suffered from chronic kidney problems since he was 12, became desperate for a new kidney, his teenage daughter had a bright idea. “In need of a kidney. O Positive,” Leibowitz printed on a t-shirt before his family’s August trip to Disneyland, at his daughter’s suggestion. Below those words, he wrote his phone number. Then Leibowitz and his four sons and one daughter flew from New Jersey to Orlando for a weekend at Disney.

Enjoying the park with his family on a sunny day, Leibowitz was approached by a stranger: a woman named Rocio Sandoval, who asked for permission to take a photo of Leibowitz’s t-shirt and post it to Facebook. Sandoval reports that Leibowitz, whose name she did not know at the time, gave her a grateful hug and asked her to share the picture with the world. By the time the Leibowitz family was boarding the plane back to New Jersey, the photo had been shared 40,000 times.

“Then the calls started coming in,” Max, Leibowitz’s 17 year-old son says. Strangers across America who shared Leibowitz’s blood type phoned the number on the t-shirt, but none were able to pass the requirements to become kidney donors.

Months passed without a match. And then a man in Indiana named Richard Sully saw Leibowitz’s photo while he was giving blood for Hurricane Harvey victims. Squeezing a foam ball with one hand and scrolling on his phone with the other, Sully saw the opportunity to make a major impact. “If I can donate blood and platelets to complete strangers that I’ll never meet, why not donate a kidney to this single father of 5?” Sully says he wondered.

Why not? It took Sully a 14 hour bus to New York, a stay in a hostel, 10 weeks of evaluations, CT scans, X-rays, samples of blood and urine, and an interview with a social worker, but he was declared an acceptable match. “As a father, I could relate to having kids,” Sully said of his reasoning for his donation. “The last thing I would want my kids to worry about every night when they go to bed is how much more time they have with me,” he said.

“I was like, ‘Oh my god! It’s over.” Says Max Leibowitz, who went into shock and then burst into tears when he heard his Dad had a donor. “All the worrying about whether he’s gonna be able to go to my high school graduation or not is just all gone,” he says. Leibowitz and Sully are scheduled for surgery in New York on January 18. “Fortunately, I am fairly healthy and I saw this as just another way to help someone,” Sully says. “It just happens to require surgery.”

Leibowitz, who has been receiving weekly dialysis for kidney failure for the past twenty years, is overcome by the promise of a longer life and by the selfless giving of a complete stranger. “It is not like we don’t have a cure for kidney disease,” he says. “We do. It is humanity. Humanity changed its name to Richie Sully.”

At the end of the ordeal, the Leibowitz family and the Sully family plan to celebrate their miracle together, back in the Magic Kingdom.