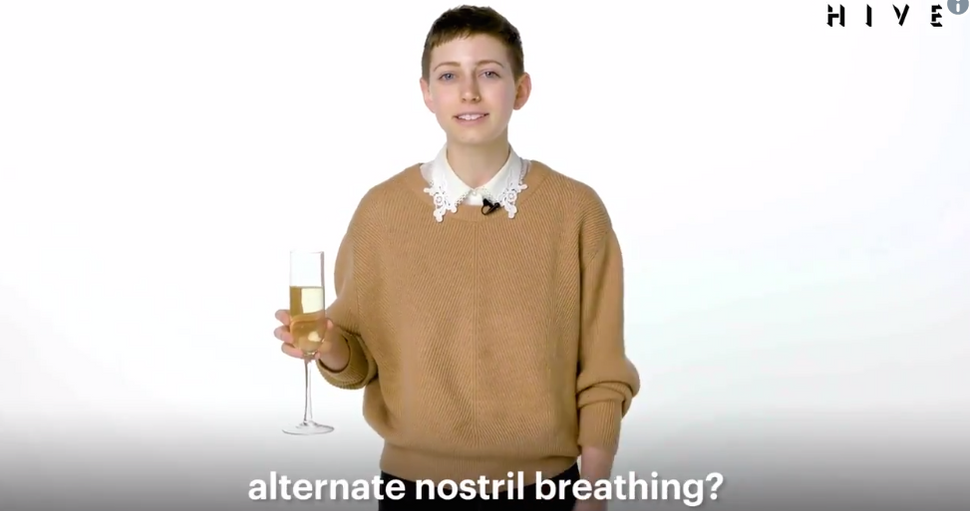 Should the former secretary of state teach a class on nostril breathing? Journalists weigh in. Image by Twitter Screenshot

Should one of the world’s most accomplished politicians and the winner of the popular vote in the 2016 presidential election refocus from community organizing to knitting? The answer, according to a group of editors at Vanity Fair, is yes.

Hillary Clinton, a former Secretary of State and New York senator, used her office as First Lady to campaign for human rights and served as a lawyer for needy and disabled children for many years. Yet according to the youthful staffer’s at Vanity Fair’s mobile-focused offshoot, The Hive, she will always just be a woman who should butt out of politics and stick to crafting.

In a video released over the weekend, a group of white, millennial staffers holding champagne flutes offer resolutions to Clinton, including the suggestion that she offer classes in “alternate nostril breathing” and “take more photos in the woods” in the new year. The most egregious comment, which has incited rage from many on the left, came from Hive staffer Maya Kosoff, who offered this sentiment to Clinton:

Take up a new hobby in the new year! Volunteer work, knitting, improv comedy … literally anything that’ll keep you from running again.

Vanity Fair tl;dr: Six young white people holding glasses of champagne would like Hillary Clinton to abandon her life’s work and platform and just shut up. Good to know. https://t.co/cELDKdVmYd

In skinny ties and vintage lace collars, the Hive staffers give off the confidence of people who would never deign to involve themselves in public service. The combination of media power, apparent privilege and evident contempt they show has excited anti-Vanity Fair furor on the internet. The video has been deleted from the Hive, but it remains on the Vanity Fair Twitter.

The publication has apologized, with a statement saying of the video, “It was an attempt at humor and we regret that it missed the mark.” But the reminder that journalists and wealthy whites who despise female power may have had a hand in Clinton’s failed presidential bid is still vivid.

Maybe it’s time for Hillary Clinton to take up a new hobby in 2018 pic.twitter.com/sbE78rA5At