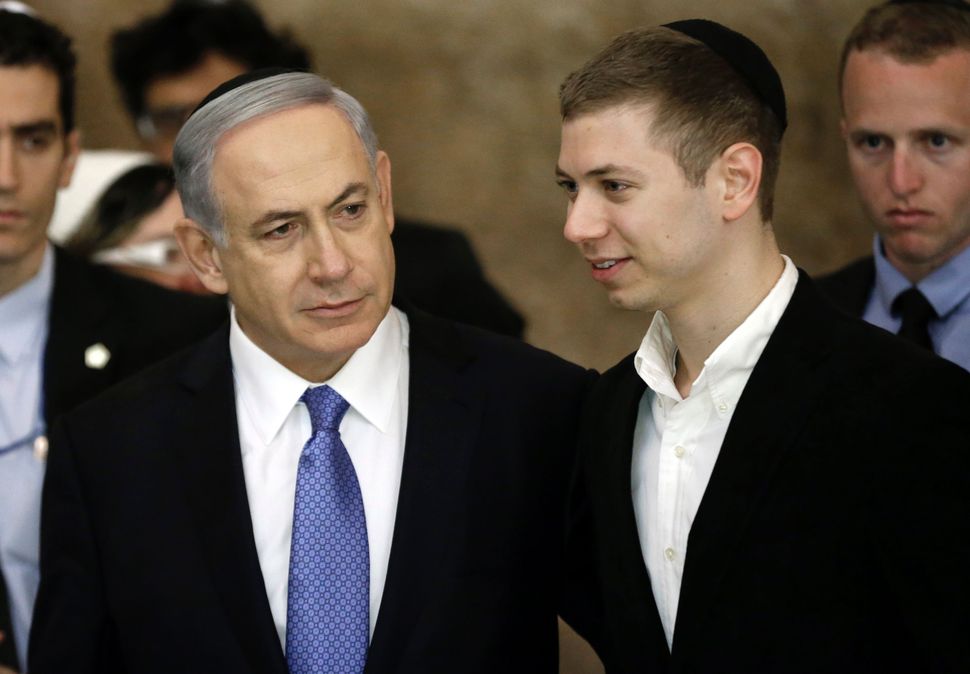 Israeli Prime Minister Bibi Netanyahu’s son Yair (can we call him Baby Bibi?) is embroiled in scandal yet again. A 2015 recording of him that surfaced today on Israeli news. He is recorded on tape outside a strip club telling a friend that his father’s help pushing a $20 billion oil deal that benefited the friend’s father entitles Netanyahu Jr. to the 400 shekel ($116) prostitution fee.

“Bro, my dad now arranged for you a $20bn deal, and you can’t spot me 400 shekels?” Li’l B reportedly tells his friend in the tape, adding, “he fought, fought in the Knesset for this, bro.” The tape, recorded on an evening when Netanyahu the Younger’s security and transportation were being sponsored by the state, ferrying them between strip clubs. The tape pauses at one point for Netanyahu Jr. to receive a call from his mother. “My mom’s calling. How embarrassing,” Netanyahu can be heard telling his friends, apparently not aware of any other cause for embarrassment. One can only imagine how both American and Israeli Jews might respond to a 2015 tape of Malia Obama bragging about her father’s corruption and snorting $50 of coke off a D.C. gigolo as Secret Service look on, then rolling her eyes at a text from the First Lady.

With prices what they are in Israel, especially in ritzy Tel Aviv, 400 shekels cannot take you far. You might spend it on a mid-range tallit at the shuk, or one pair of sensible shoes. I have had mediocre brunches in Israel that cost about 400 shekels. If Yair Netanyahu was feeling sort-of, kind-of lavish and desirous of a fun night on the town, here are some better choices he could have made with his approximately $116 US dollars:

He Could Buy 30 Scoops Of His Parents’ Favorite Ice Cream Israel’s economy is so unwell that young people whose grandparents escaped German death camps and fought Israel’s earliest existential battles are now moving to Berlin because it is cheaper. Nevertheless, state leader Netanyahu came under fire last year when he was accused of spending an annual $2,700 from state coffers to purchase ice cream. The Jerusalem ice cream store Glidah Metudela, which was revealed to be the family favorite where the Prime Minister would order pistachio while his wife favored french vanilla, sells individual scoops of ice cream for 13 shekels a piece. With 400 shekels, Yair Netanyahu could afford to purchase 30 scoops of ice cream for his parents, alleviating the national budget in his own small way. (Consequently we must point out that if you are going to pay for sex, it should cost more like 75 scoops of ice cream, not 30.)

He Could Have Donated $150 To Feminist Pluralist Group “Women Of The Wall” Paying a woman a negligible amount of money in exchange for sex is something of a masterstroke of rebellion on young Netanyahu’s part. The exchange is only legal-ish in Israel, which has a major sex trafficking problem, and prostitution is frowned on by Jewish law when not outright condemned. “If a man sees that his evil.

Netanyahu, whose conversation was recorded and took place at a hotel in between visits to strip clubs, and who doubtless was not covered in black cloth, violated Talmudic instruction in deft defiance of every one of his father and mother’s expectations for him. But if Li’l Netanyahu really wants to get his parents’ attention he’ll need to rise above petty law breaking and prurience. A donation to one of his father’s least favorite causes, the group “Women Of The Wall” which protests in and out of court for equal rights at the Western Wall for women, would disgrace his parents much more decisively.

He Could Rough It At An Israeli Youth Hostel With Baby Bibi’s type of budget, a stay at a luxurious Israel hotel like the King David Citadel is out of the question — at least without foregoing a whole harem of people who wouldn’t touch him without being paid. He could perhaps afford to sleep in the coatroom or eat one breakfast at most. Netanyahu2 could not even afford a stay at a Leonardo Plaza. But with $116, he could see Israel through the eyes of his foreign peers, spending exactly one night at the Tel Aviv youth hostel Bnei Dan. Sadly, he would not be able to afford a delousing treatment after his stay.

He Could Order The Tasting Menu At Tel Aviv Hot Spot Machneyuda The tasting menu at the revered restaurant Machneyuda costs 295 NIS, which in the blissfully tip-free Jewish homeland would leave Baby Netanyahu 105 shekels left over for a sensible post-meal lap dance or two.