But sexual assault and misconduct are wildly difficult to prosecute by the very nature of the privacy that surrounds sexual acts and the shame resulting in being a victim. Even for the crime of rape, the reality is that 994 out of 1,000 rapists walk free. We can’t always count on the court system to divide the guilty from the innocent, let alone the icky abuses of power which might be fireable but not criminal offences.

And because we, the public, vote for media with our feet, remote controls or clicks, the court of public opinion is, unfortunately, vital. We depend on journalists to serve as an intermediary between us and our public figures, to help us decide who to support. Most of us want to know that our dollars and our leisure hours are being spent on people whose personal behavior wouldn’t disgust us.

That’s why it was so disappointing that celebrated comedian and talk show host Stephen Colbert gave James Franco a ludicrously softball interview about sexual assault allegations that have been leveled against him.

Franco, an actor who has often been celebrated on the Schmooze, received “Best Actor In A Musical Or Comedy” for his performance in the movie “The Disaster Artist” at the Golden Globes over the weekend. Immediately after the presentation, though, he came under fire on Twitter for accusations of sexual misconduct and assault.

The most substantial evidence against Franco is an interaction he had in 2014 via Instagram with a 17-year-old woman in New York City, which instantly resurfaced on Twitter as Franco accepted his accolades. Franco met the woman at the stage door of “Mice and Men,” which he was starring in on Broadway at the time. He contacted her through Instagram direct messenger and asked her repeatedly to meet him in a hotel room after learning that she was 17, the age of consent in New York City. The woman, Lucy Clode, posted the interaction (which shows Franco’s face) online, and the actor issued a jocular response on Twitter, stating, among other things, “I HOPE PARENTS KEEP THEIR YOUNG ONES AWAY FROM ME.” The night of the Golden Globes, many took to Twitter to call out the hypocrisy of Franco wearing a “Time’s Up” anti-sexual assault pin in light of the 2014 scandal.

James Franco admitted to attempting to get a 17 year old to go to his hotel room. Everyone who is saying someone “claimed” that it happened is apparently missing that? He. Admitted. That. He. Did. This. This video is so frikkin cringe. https://t.co/hhH3kuzjkf pic.twitter.com/7h5i6PbpKX

The same night, actress Violet Paley tweeted accusing Franco of sexually assaulting her as well as her friend, who she claims was 17 at the time.

Cute #TIMESUP pin James Franco. Remember the time you pushed my head down in a car towards your exposed penis & that other time you told my friend to come to your hotel when she was 17? After you had already been caught doing that to a different 17 year old?

A couple weeks ago, James offered me & a few other girls an overdue, annoyed, convenient phone “apology”. I don’t accept, but maybe some other people’s lives would be made easier if he donated all of his earnings from “The Disaster Artist” to @RAINN01.

Another actress, Sarah Tither-Kaplan, also tweeted, saying that when she performed a nudity scene in a Franco-helmed movie, she was exploited. Tither-Kaplan’s tweet received huge amounts of criticism, saying that if she signed a contract she knew what she was signing up for, and could not have been exploited. Others protested that contracts in the case of such major power imbalances can be exploitative.

Hey James Franco, nice #timesup pin at the #GoldenGlobes , remember a few weeks ago when you told me the full nudity you had me do in two of your movies for $100/day wasn’t exploitative because I signed a contract to do it? Times up on that!

Ally Sheedy, the Jewish actress who is best known for her role as Allison Reynolds in “The Breakfast Club,” and who was in a play directed by Franco several years ago, tweeted cryptically after Franco’s win. She deleted her comments later that evening, but the screenshots are below: 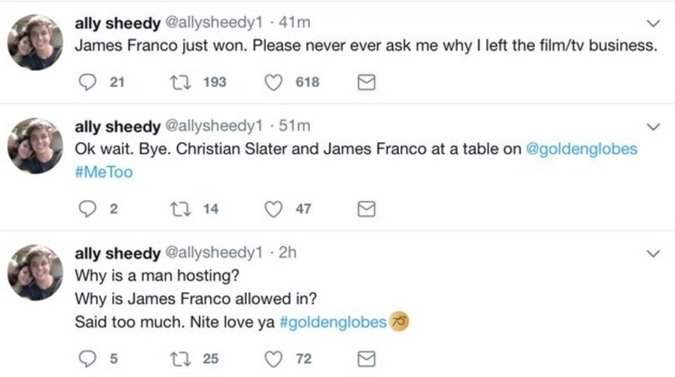 After a night of flying accusations and the resurfacing of Franco’s 2014 scandal, the New York Times canceled a talk scheduled with Franco and his brother, actor Dave Franco. In a statement to The Hollywood Reporter a spokesperson for the paper said, “The event was intended to be a discussion of the making of the film, ‘The Disaster Artist’. Given the controversy surrounding recent allegations, we’re no longer comfortable proceeding in that vein.” Then, on Tuesday night, Franco appeared on Stephen Colbert for a friendly, pre-arranged interview about the success of “The Disaster Artist.”

In the final five minutes of the interview, Colbert said this:

“Now, we gotta go here in a minute, but before we do, I do wanna ask you something, and I know I mentioned backstage that I wanted to talk to you about this, and if you’re okay talking about this I want to ask you about some criticism you got on Golden Globes night. Because you were wearing a ‘Time’s Up’ pin in support of the ‘Time’s Up’ movement which has been created by many powerful women in Hollywood to say that time is up for the abuse, uh misuse of women both sexually and otherwise, not only in Hollywood but around the country […] You got criticized for wearing that. Um. Do you know why? And, and, and — what, do you have a response? Anything you want to say about that criticism?”

To his credit, James Franco gave an almost perfect response. He spoke gravely about the seriousness of sexual assault and the importance of the Time’s Up movement. He gently denied the Twitter accusations, admitted that he did not know what Ally Sheedy was referring to but added, respectfully, “I can’t speak for her.” To the accusations at large, he said, “If there’s restitution to be made, I will make it. So if I’ve done something wrong I will fix it, I, I have to.”

Though Franco’s words could be seen as equivocating, and certainly he is an Oscar winning actor who is more than capable of appearing genuine when he is not, the actor’s response was about the best thing any person could muster in response to an assault accusation. He maintained a near-perfect balance of acknowledging the power of the movement, defending himself from what he claims are false charges, and making known his willingness to change and learn. “I support change, I support 50/50 in 20/20, which means people that are underrepresented — women, and people of color, and people in the LGBT community — get power and they fill positions, they fill all the positions that they’ve been deprived of. I completely believe in that,” he told Colbert. “I’m here to listen and learn and change my perspective where it’s off, and I’m completely willing, and I want to,” he concluded. Franco said what any mother would wish that his son would say if he were falsely accused of sexual assault.

But why did Stephen Colbert, who has never been known to pander, play his part with such simpering apology? Why did he describe real sexual assault allegations (however credible or not they may be) as “criticism”? Why did Colbert suggest that he had casually mentioned this topic to Franco backstage, when more than likely he gave Franco ample time to craft a pitch-perfect response?

Colbert went on to say this:

Why does Stephen Colbert dismiss social media as a means by which survivors can speak out about abuse and harassment? Why does Colbert suggest that his enormous platform which selectively performs obviously pre-planned celebrity interviews, is a more legitimate place to discuss sexual misconduct claims than Twitter? Colbert then asked Franco, “Do you have any idea of what the answer might be to come to what sense of what the truth is so there can be some sort of reconciliation between people who clearly have different views of things?” This is a fascinating question and one that is warranted in the national conversation about the painful grey areas of sexual assault, but why should a man who stands accused of sexual assault be presented as an expert who should preach to the nation about how he and other powerful men should be prosecuted?

Stephen Colbert has made a career as a bullshit-proof champion of the truth and a true progressive who disdains hypocrisy. It is admirable that he is working to approach damning sexual assault accusations with extreme delicacy. But there is a world of appropriate, fair journalism in between Colbert’s unctuous chat with Franco and, for example, John Oliver’s controversial interrogation of Dustin Hoffman last month.

Perhaps if we had fewer Stephen Colberts and a few more Samantha Bees in our pantheon of talkshow hosts, we wouldn’t have to be having this conversation at all.