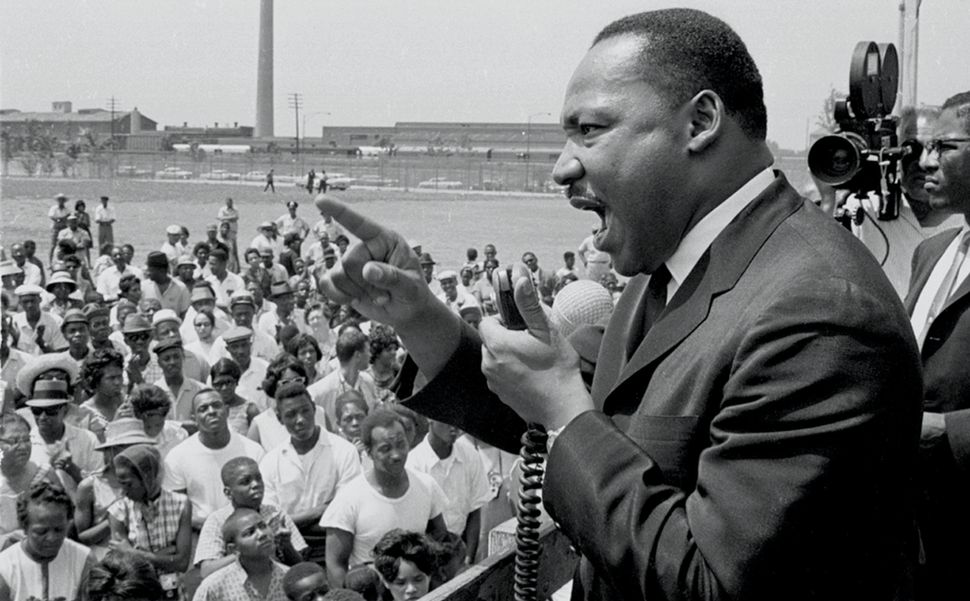 Dr. Martin Luther King had things to say about “white moderates” that didn’t fit in his “Dream” speech Image by Getty Images

It can be tempting to remember the Reverend Doctor Martin Luther King Jr. as a quiet dreamer whose vision of racial equality involved nothing more than prayers for peace and hopes for an end to racial tension. It’s easy to rework the civil rights leader’s tremendous achievements and writings as a plea for tolerance that could never offend anyone. In fact, King’s work can be more realistically seen as a radical call for justice that in turn condemned racist police brutality, criticized “the white moderate” and, yes, approved of breaking unethical laws and protesting even when it inconvenienced others.

As Jews today and the rest of the week reflect on Dr. King’s work, and especially the remarkable relationship he shared with Rabbi Abraham Joshua Heschel and the myriad ways King’s Jewish contemporaries turned their own prayers into “inconvenient” action, we would do well to remember the Dr. Martin Luther King, Jr. who challenged us as well as inspired us.

Designer Daniel Rarela’s series of pieces, “Inconvenient MLK,” excerpts quotes by Dr. King that are less known and less “convenient” than the visionary’s most popular sayings. The series echoes the disruptive, iconic labels of Barbara Kruger’s art. Rarela told me that he was inspired to create these memes, which show quotations superimposed either on a picture of King or on recent pictures of peaceful black protest, last year when he noticed that some social media users were taking King quotes out of context as a way to condemn black protesters rather than racism. He calls it “selective compassion.”

my TL is gonna be FLOODED with the same MLK quotes i’ve been reading since i was 6. Not this year. NOT THIS WEEK. here you go. #MLKday2017 pic.twitter.com/0LcVVooU0w

“In 2016, there was a peaceful Black Lives Matter protest in Dallas which eventually turned violent as a gunman opened fire and killed several police officers,” Rarela recalls. “That’s when I started seeing posts on social media – the typical Martin Luther King Jr. quotes about love, peace, ‘hate cannot drive out hate,’ etc.” Rarela says that during the time of the Dallas protests he read Dr. King’s “Letter From A Birmingham Jail” and was shocked by its modern resonance. “Dr. King, in his time, had to deal with white people who wanted peace, but didn’t realize that the kind of peace they were asking for was, as King put it, ‘the absence of tension’ rather than ‘the presence of justice,’” Rarela says. “It would seem as if there are many white people today who don’t yet realize how much they have in common with the “white moderates” with whom Dr. King expressed disappointment in 1963.”

Because I’ll be damned if I let Martin Luther King Jr. get whitewashed this year.#MLK #MLKday #MartinLutherKingDay #WhiteChurchQuiet #BLM pic.twitter.com/iZUTu9fvfd

Rarela’s posts have gone viral, using the hashtag “#InconvenientMLK.” The designer says the people he most hopes will view them are “those who believe Martin Luther King Jr. would’ve condemned Black Lives Matter, Colin Kaepernick, or race-related protests today. My hope is that reading these lesser-known words from Dr. King will change the perspective of those who would use Dr. King to silence those who are continuing to fight for what he fought for.”

The notion that Dr. King was “universally popular and made no one uncomfortable [or] angry enough to want to kill him” is a false one, says Rarela. But becoming acquainted with King’s expansive body of writing can help. “If [the project] encourages people to go beyond his ‘I Have A Dream’ speech to read “Letter From A Birmingham Jail” and do the hard work that comes with making Dr. King’s dream a reality, so much the better,” says Rarela.

Jenny Singer is a writer for the Forward. You can reach her at [email protected] or on Twitter @jeanvaljenny. You can follow Daniel Rarela @DJRarela