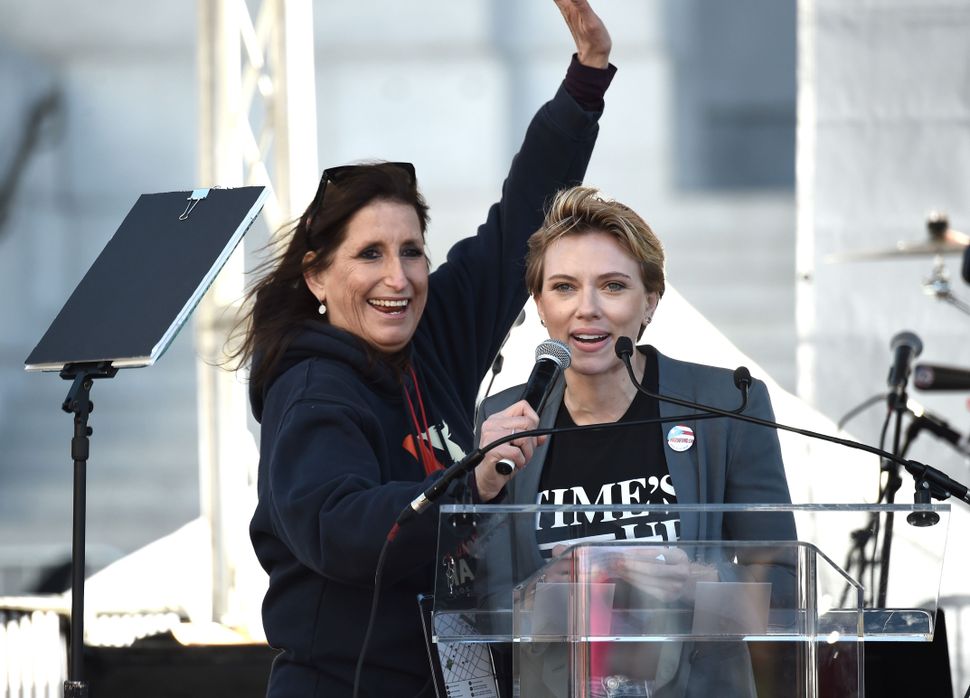 Scarlett Johansson is making headlines for attacking James Franco at the Los Angeles women’s march this weekend. But her decision to focus her speech on the grey areas of sexual misconduct that some see as “bad sex” and others as “sexual assault” is the real news. In a brilliant speech, Johansson raised the level of discussion on a topic that has ripped proponents of the #MeToo movement into smaller and smaller factions.

Just over a minute into her speech, Johansson addressed James Franco without directly naming him(a representative for Johansson confirmed to People that the comment was about Franco.) “My mind baffles: how could a person publicly stand by an organization that helps to provide support for victims of sexual assault, while privately preying on people who have no power?” the star asked. “I want my pin back, by the way.” To the crowd’s roaring approval, the actress was referring to the “Time’s Up” pin that Franco wore to the Golden Globes, in apparent contrast to the five allegations of inappropriate sexual behavior leveled against him since the event.

The comment was incendiary, but an attack against Franco, who has been accused of mistreating, not assaulting women, represented the more subtle kind of bravery that dominated Johansson’s speech. The actress left the firm ground of clear rape and harassment charges, and shifted the conversation to the sexual power dynamics that often leave women feeling assaulted though no laws may have been broken.

Johansson’s speech marked an important departure from the topics that have been central to the women’s march movement so far, which generally include praising female power and calling for specific change, as well as criticism of anti-women policies and President Trump. Johansson also did not speak about the central theme of the #MeToo movement — sexual harassment and misconduct in the workplace. Rather, she traveled further into the murky depths of issues of consent, coercive behavior, sexual pressure, power-imbalance and sexual agency that burst painfully into public discourse since the Franco accusations reappeared and the now-infamous Aziz Ansari story was published in “Babe.”

Speaking into a microphone held at first by Los Angeles Women’s March co-organizer Deena Katz and then taken up by Jewish actress Mila Kunis, Johansson said that reflecting on these questions led her to a revelation that turned into something every woman listening could recognize: rage. “Suddenly I was 19 again, and I started to remember all the men I’d known who’d taken advantage of the fact that I was a young woman who didn’t yet have the tools to say no or to understand the value of my own self worth,” Johansson said, of relationships that made her feel, even as a movie star, “unseen and degraded.” She approached relationships, she said,”from a place like so many young women do of feeling like my creative value and my professional value and my sexual value could only be measured by the approval and desirability of a man.”

That is revelatory. It is revelatory for an A-list movie star to acknowledge in front of a crowd of feminists that her life has revolved around seeking “the approval that women are conditioned to need.” It is radical for an actress who represents conventional perfection to express that being taught “to be polite, to please, and to pander,” is a “visceral reality” that most women can relate to.

And it is revelatory that Johansson, to the dismay of critics who believe that complaints about sexual coercion are just another way to rail against all men, offered the outline for a solution.

I want to move forward. And for me, moving forward means my daughter growing up in a world where she doesn’t have to be a victim of what has cruelly become the social norm. That she doesn’t have to fit into the bindings of the female condition. TIME’S UP ON THE FEMALE CONDITION. Gender equality can’t just exist outside ourselves, it must exist within.

By calling for each person taking responsibility of their own and their children’s actions and relationship with themselves, Johansson neatly avoids any messy dissection of specific episodes (like the Ansari or Franco allegations). Rather, she gives this advice to everyone: “No more pandering. No more feeling guilty about hurting people’s feelings when something doesn’t feel right for me.”

Johansson makes it clear that women whose conditioning to please men at the expense of their own preferences, comfort, and safety don’t deserve blame, or pity, but hope. She closed her speech, saying, “I am finally on a path of forgiveness. Not for the people who took advantage of my conditioning to pander, but forgiveness of myself.”

“I stand before you,” she said, “someone who is empowered.”

Watch Johansson’s revelation (through 6:25) below: