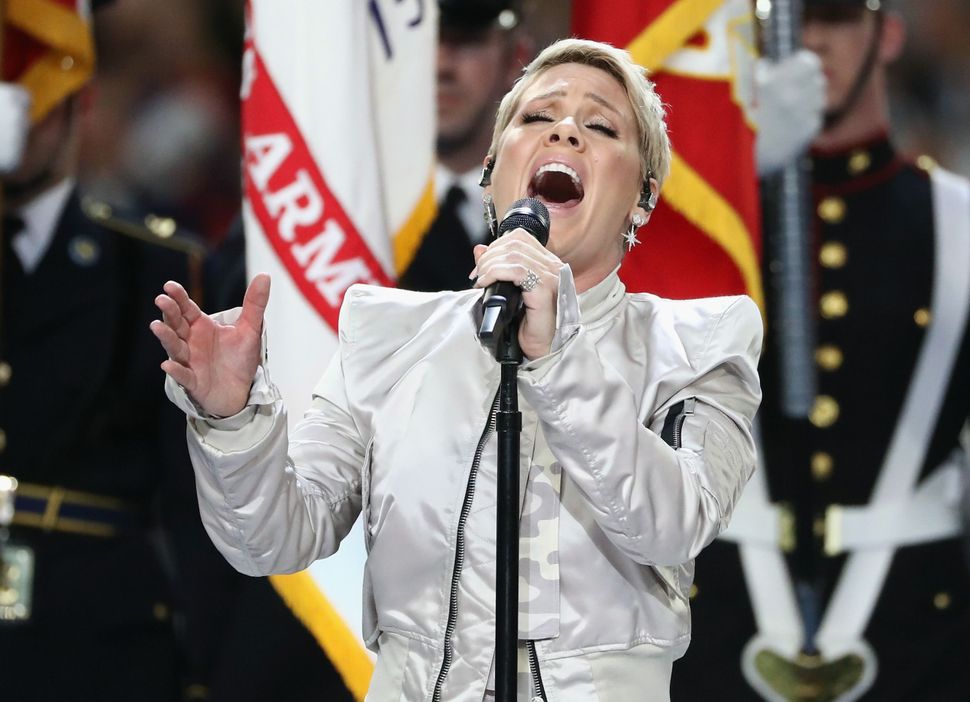 And she did it while suffering from one of the deadliest and most damaging flu seasons in recent history.

Pink, who is at once gender-defying and femme, youthful and maternal, alternative and a perfectly patriotic addition to a football stadium, was devastated by a flu diagnosis just days before the game. “I’ve arrived at another one of my dreams, which is slowly becoming a sort of nightmare” she wrote, one day before she was scheduled to perform from U.S. Bank Stadium. Citing her children, whom she lovingly referred to as “two small petri dish kids who literally COUGH INTO MY MOUTH” the singer thanked her children (Willow and Jameson, six and one-years-old, respectively) and ended her post #ifIcansingitI’mgonnakill it.

And kill it she did.

With only slight wavering on some of the higher notes, Pink delivered a classic, gorgeous rendition of the anthem, with a few perfectly placed riffs that reflected the singer’s pop background without distracting from the iconic melody. Her perfectly imperfect, defiant-in-the-face-of-difficulty performance encapsulated the appeal that has kept her beloved.

Pink was joined by Alexandra Walles, a sign language interpreter whose tremendous emotional connection to the song was a highlight of the broadcast.

They ASL interpreter got 6 seconds of air time ? #SuperBowl pic.twitter.com/4CW5GidQO7

Pink’s reverent delivery, glossy vocals, and, yes, subtle ejection of gum (or was it a lozenge?) right as the orchestra cues up, make hers a national anthem to remember.