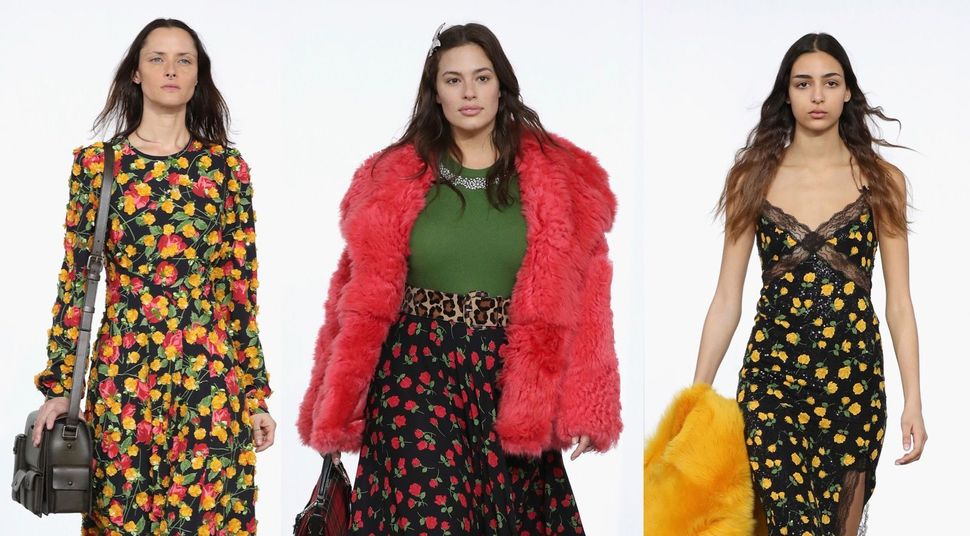 It’s been nearly 3 years since New York Fashion Week was evicted from Lincoln Center and forced into Skylight-branded locations like Clarkson Square and Moynihan Station (recently, the industry event shifted spaces again, to this week’s current base of operations at Spring Studios).

But on Wednesday, Michael Kors returned to the pedestrian square, showing a large, even excessive, collection (with 75 looks in total). The venue, the lobby of the Vivian Beaumont Theater, is to the back of Lincoln Center’s famed fountain, but it had an equally gorgeous view: a rectangular pool with organic sculptures.

It was Valentine’s Day, so Kors staged a show that was a love song to fashion, to New York in particular (one of the songs on the soundtrack was Alicia Keys’ ‘Empire State of Mind’), and a joyous celebration of all things personal style. It was persistently upbeat — a feeling best expressed in a lacy black sequin slip dress with yellow flower print, and in the music, specifically when the soundtrack played the Julie Andrews song “Favorite Things” (which has the so-needed-to-hear-right-now line: “When I’m feeling sad/ I simply remember my favorite things/And then I don’t feel so bad.”).

But that’s where the problems cropped up: It was a collection that tried too hard to be too many things for too many people. As look after look pranced by, the message got muddled and the positivity lost some of its zest. Sure, there were a lot of wearable pieces: like the Melton checked, four pocket coat paired with knee-high boots with two rows of buttons along the shaft. And Kors didn’t forget about the details, as in a modest, long sleeve floral frock with tiny yellow plastic flowers sewn on nearly every inch. But it was a confusing cornucopia that left you wanting. The styling didn’t help either — a wide leopard belt paired with a flowing A-line skirt felt dated and cutesy (the silver bow barrette took the cuteness to a frustratingly tacky level).

There is a logic to catering to your clientele, to making pieces that different kinds of people will love at different points in their life. But if your messaging is confusing to customers, if your brand gets caught up in empty gestures of “positivity!”, it can feel disingenuous.