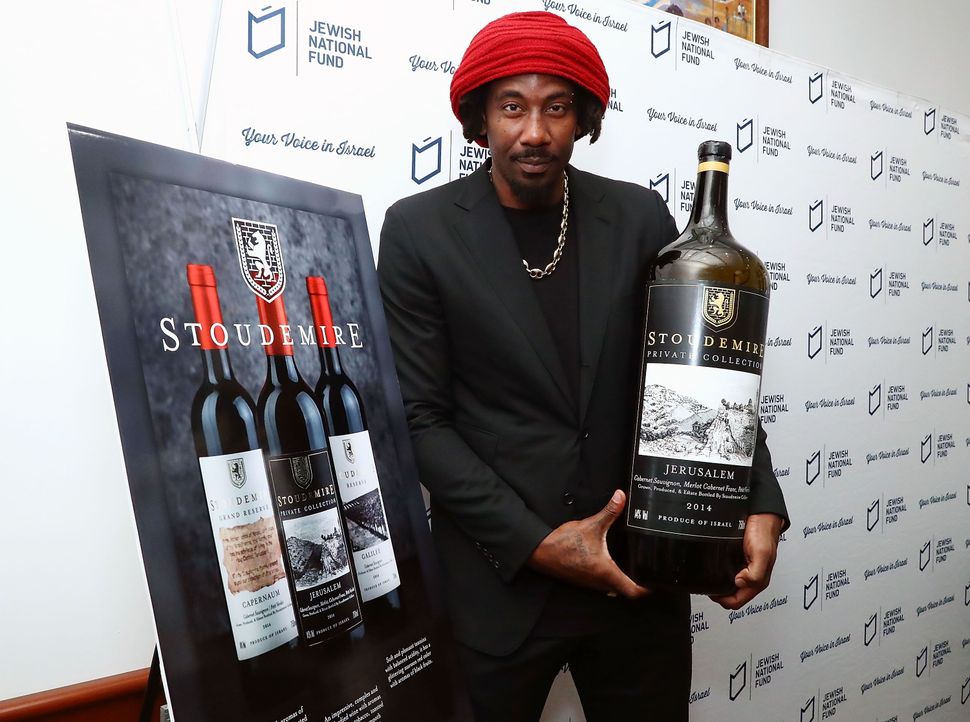 (JTA) — Six-time NBA All-Star Amar’e Stoudemire has launched a line of kosher-for-Passover Israeli wines. The 6-foot-10 former player, who returned earlier this month from a trip to the Jewish state, spoke glowingly about the wines and his connection to Israel at a news conference here Tuesday.

“It’s a blessing for me and my family to be able to produce such great wines from a land like the land of Israel, so we’re constantly counting our blessings for that,” Stoudemire told reporters at the Jewish National Fund House on the Upper East Side.

Stoudemire, 35, said he had been in talks with the Israel Wine Producers Association for three years about making an Israeli wine and realized the opportunity when he relocated to the country in 2016 to play for the Israeli team Hapoel Jerusalem. He retired from basketball last year after helping lead Hapoel Jerusalem to the Israeli Basketball League Cup.

“Once I moved to Israel, it was the perfect connection to meet with the vineyards and go to the tastings and figure out the different blends for each bottle,” said Stoudemire, a part-owner of Hapoel Jerusalem.

Stoudemire played for the New York Knicks and Phoenix Suns among other teams in a 16-year NBA career. Although raised Christian, he began exploring a spiritual connection to Judaism on a trip to Israel in 2010.

Stoudemire’s line includes two red wine blends and one Cabernet Sauvignon, all produced in limited quantity by the Tulip Winery on its vineyards in Kfar Tikva, in Israel’s north.

The winery produced only 100 bottles of the high-end wine, Stoudemire Private Collection, with each bottle retailing at $244.99. It produced slightly larger quantities, 1,680 each, of the Stoudemire Reserve and Stoudemire Grand Reserve wines, which are retailing for $59.99 and $99.99, respectively. The kosher beverage giant Royal Wine Corp. is distributing the wines, which are currently only available for purchase in stores in New York and New Jersey.

Stoudemire, who continues to speak about his connection to Israel, said he’s open to producing additional wines, but that he would not produce them outside the Jewish state.

“I prefer to keep the wines strictly from the grapes in Israel,” he said. “It’s my way of giving back to the land. I try to do what I can to stay rooted.”

Making sure the wine was kosher was important to the basketball star. Stoudemire identifies with the Hebrew Israelites, African-Americans who believe they are connected to the biblical Israelites and adhere to some Jewish customs.

“A kosher wine is always important for us because you can drink those during the High Holy Days,” he said.

This isn’t Stoudemire’s first venture outside of basketball. He has also started his own clothing line and record label, and written children’s books.

His fans may also wonder if Stoudemire will be using the wine for purposes other than drinking: In 2014, the athlete shared a photo of himself soaking in red wine. He later said that he had been engaging in the practice — known as vinotherapy — for months in order to relax and rejuvenate his body.

On Tuesday, Stoudemire said the whole deal had been exaggerated.

“It was a birthday gift, a friend of mine was [saying], ‘Hey I got this perfect place for you to go, they have this red wine bath, and I want you to try it out,’” he recalled. “So I went and tried it out. It was great, so I took a picture, then I posted on Instagram, and it just kind of was blown out of proportion. That’s a luxury deal, red wine baths.”