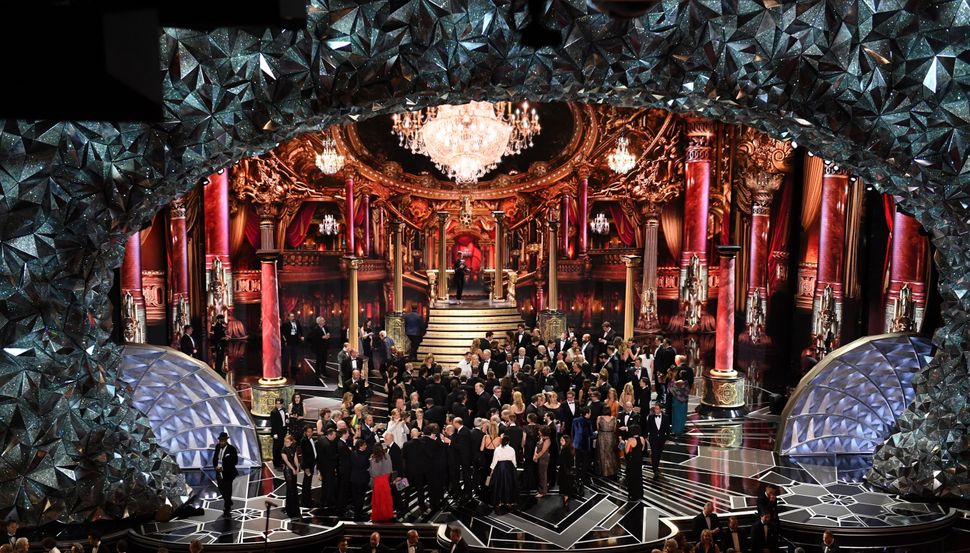 The Oscars are over, but never fear: Movie news remains relentless. The Daily Beast reports that the NYPD wants to arrest Harvey Weinstein; per Vulture, Netflix is developing its own universe of superhero movies; Deadline reports that, in line with the current craze for revivals, “Sopranos” creator David Chase is developing a movie that will serve as a prequel for the beloved series, which concluded in 2007.

That’s not enough for you? Read on for the best of the Forward’s film coverage from the past week.

1) We broke down the Oscars

The Oscars were exceedingly shiny and attempted to be exceedingly earnest, and we at the Forward were only slightly less earnest in analyzing them. Jenny Singer recounted every single Jewish thing that happened at the awards; Becky Scott covered the across-the-board losses of Jewish nominees and the ceremony-stealing success of co-presenters Maya Rudolph and Tiffany Haddish; Sam Bromer reviewed the anti-union history of the Oscars’ founding; and I wrote about the uniquely insidious way in which the Oscars shaped my ideas about womanhood.

Yes, really: Al Pacino was once an office assistant at Commentary Magazine. (And yes, it was during the editorship of Norman Podhoretz.) How did the experience impact his performance in “The Godfather”? We’ll never know.

The release of a preview for a documentary rarely causes widespread joy. The trailer for “RBG,” Betsy West and Julie Cohen’s forthcoming documentary about pop culture’s favorite Supreme Court justice, proved an exception to that rule. As Jenny Singer writes, “You like triumph against injustice? You like romance? You like unlikely success stories? You like history? You like action? You like celebrities? You like feeling hope? I think you’ll like the new Ruth Bader Ginsburg documentary ‘RBG.’”

Daniel Witkin spoke to the Argentinian filmmaker Alejo Moguillansky about his most recent project, “The Little Match Girl,” which had its U.S. premiere last week. “Though still largely unfamiliar to American audiences, Argentina has become a fertile ground for contemporary cinema, giving the world internationally renowned filmmakers like Lucrecia Martel and Martín Rejtman as well as a tightly knit younger generation including Moguillansky, Mariano Llinás, and New York-based expat Matías Pineiro,” Witkin writes.