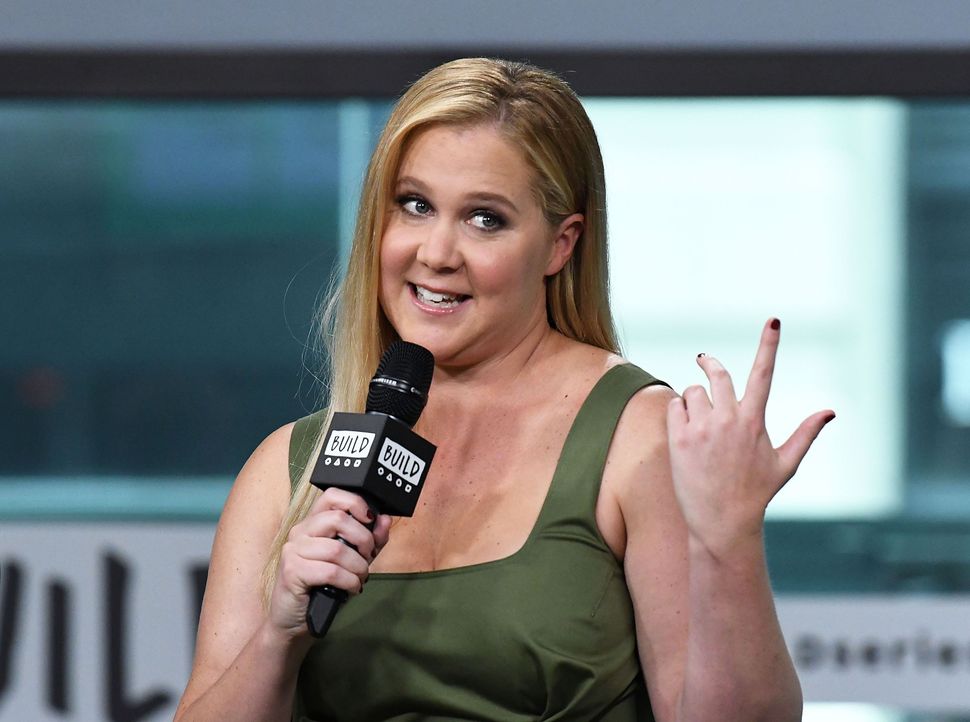 Like so many people, I thought Amy Schumer was going to remain single forever, a nun wed to her comedy about the horrors of dating straight men. I really thought she would never leave us. Like so many, on February 12, I was plunged into darkness by her sudden, one-word announcement that she had married a human male. Who was he? How long had they been together? Why could we only see his profile in so many of the pictures? What was he hiding on the other side of his profile?

It has been an excruciating period of not knowing anything about the marriage of a woman I have never met. But as Schumer’s honeymoon has ended and she has begun promoting her upcoming movie, “I Feel Pretty,” heroic journalists and Howard Stern have pressed her for details on her new husband, her wedding, and what this all means for her relationships with us. Take heart — here is every single thing we know about Amy Schumer’s wedding and marriage.

Chris Fischer is a 37 year-old (one year older than Amy) chef. He won the James Beard award for a cookbook he wrote in 2015 and used to be the sous-chef at Mario Batali’s restaurant Babbo. Fischer is the brother of Schumer’s personal assistant. The comedian told Howard Stern that she met her now-husband when she was visiting Martha’s Vineyard and her assistant suggested that Fischer come over to cook dinner.

But who among us hasn’t met a lover through a personal assistant’s ties to the private chef industry in rarefied parts of Massachusetts? It’s the new Tinder.

Schumer told the hosts of The Today Show she knew that Fischer was “the one” just one month into dating. “We got down to business really quick,” she said, though she pointed out that she and Fischer were friends for six months before they started dating. “I got that feeling where all the blood goes to all the places,” she said of him. Vivid!

Schumer says she was sleeping when Fischer woke her up and proposed to her. Sounds like a beautiful sort-of metaphor for the beginning of a lifelong connection, plus it’s amusing because Schumer was wearing ear plugs and an eye mask. “I got you this,” she says Fischer told her, handing her an engagement ring. Schumer says that Fischer offered to get down on one knee and she demurred but accepted the ring.

Having dated only for a handful of months, Schumer and Fischer also made quick work of wedding planning, spending only a couple of days on the details of the event. “I’m getting married on Tuesday. I hope you can come,” she texted guests, including family. This gambit would lead to me sending a bride plunging into the nearest pit, but I suppose it is charming when Amy Schumer does it.

Schumer has said that she bought the first gown she tried on, a $5,500 Monique Lhuillier Severine Chantilly Lace and Tulle Gown, which can be found at Nordstrom’s. It’s very Amy. Schumer wore her hair in braids that wove into a low ponytail, with loose tendrils framing her face.

80 people attended the Schumer-Fischer nuptials, including Larry David, Jennifer Lawrence, Chelsea Handler, and Jake Gyllenhaal. Lawrence, a close friend of Schumer’s, gave a toast saying, according to Schumer, “You’re the matriarch now and it’s a role you’ll be so good at, and I know you love fiercely.”

Schumer walked down the aisle to “Rainbow Connection.”

When Schumer first released an Instagram album of photos of her wedding, I noticed Fischer stomping on the glass — proof of a Jewish ceremony and an assurance that our rituals will exist for a thousand more years! Then I saw that the officiant was a barefoot blonde woman in a mullet and a sateen vestment reading “reverend” and emblazoned with crosses, and I started weeping into my off-season iced coffee. Why would Amy spit on her ancestors’ graves like this, I wondered.

But guess what? The officiant wasn’t a reverend or a rabbi, it was comedian John Early, in drag as his character Vicky. John Early, though not Jewish, is beloved by The Schmooze and known for his role on the TBS show “Search Party.” Thus the wedding was not Jewish or Christian, but a comedy wedding. Ergo, it was a Jewish wedding.

The wedding was on the beach outside of a home in Malibu, California. There appear to have been a number of well-dressed dogs present.

Mazal, Amy and Chris! May your union be blessed with comedy, pasta, little dogs, and as much sharing with your beloved public as feels right to you.