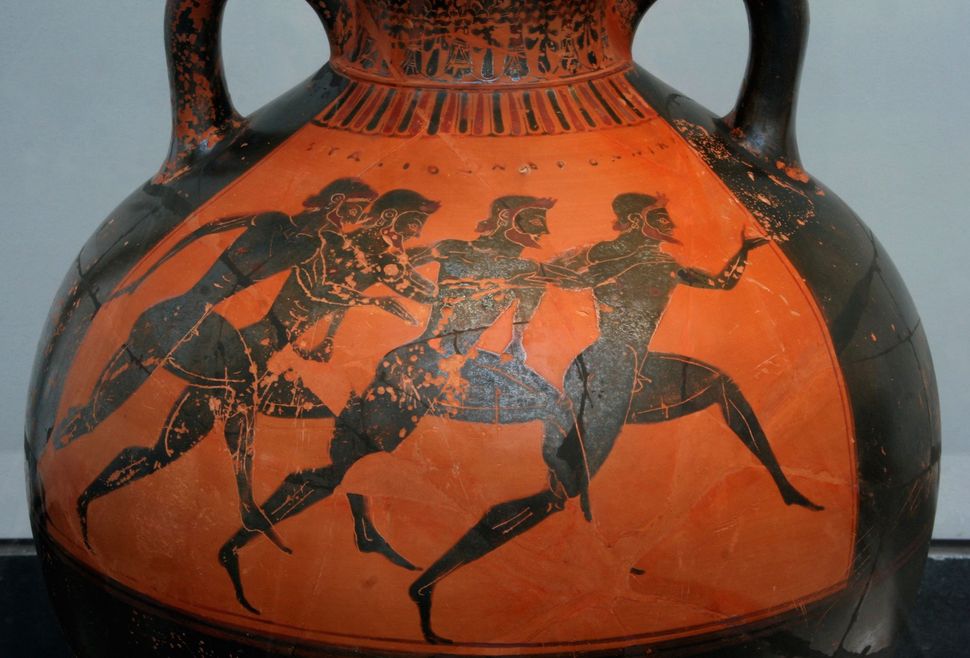 Melber, whom I had never heard of due to being a millennial non-TV owner, is, apparently a lawyer who succeeded Greta Van Susteren at MSNBC and used to write for the Forward. Frankly, my only worry as far as he is concerned is if he will agree on raising our four children as vegetarians. In Melber’s five minute interview with Eichner, the singular comic power behind “Billy On The Street” and a star on “American Horror Story,” the two established an electric connection based on their equally strong eyebrow-game and soft-burning passion for liberal politics.

“Sometimes I’m so busy doing the work that I forget [to reflect] on how much I’ve meant to American democracy, and, you know, the republic in general,” Eichner began, as the two men flashed excellent orthodontic work at each other over Melber’s desk. Not content with bringing a sharp wit and an even sharper jaw line to cable television, Eichner also observed that his show, “Billy On The Street” has taken on darker news stories because “now culture and politics are fully merged, and so to not talk about [politics] would make the show feel completely irrelevant.”

The comedian appeared on The Beat not as a screen test for a “Call Me By Your Name”-inspired buddy comedy starring two men on the brink of their 40’s (which is too bad), but so Eichner could promote his initiative “Glam Up The Midterms,” which aims to raise the numbers of young Americans who vote in the 2018 midterm elections. Eichner explained that despite his recent darker comic bent, “One of the reasons I wanted to do the Glam Up The Midterms campaign is that it’s an optimistic approach to what’s happening.”

Melber and Eichner achieved their most high-octane sexual chemistry when Melber attempted to turn one of Eichner’s “Billy On The Street” games on the gameshow host himself.

Comedian @billyeichner and @AriMelber play ‘for a dollar’! pic.twitter.com/fbULLS4PlL

Finally, Melber questioned Eichner about his upcoming Netflix special. “It seems that it’s come much later in your career than many other comics,” Melber said. “I was busy,” the comic responded, coldly. Melber persisted in his questioning until Eichner shouted, “What’s this, freakin’ McCarthy hearings?” and demanded to be introduced to Rachel Maddow.

The segment ended with the two men gripping each others hands while holding eye-contact. Yet it shall carry on in our hearts, and most likely in the wilderness of our imaginations.