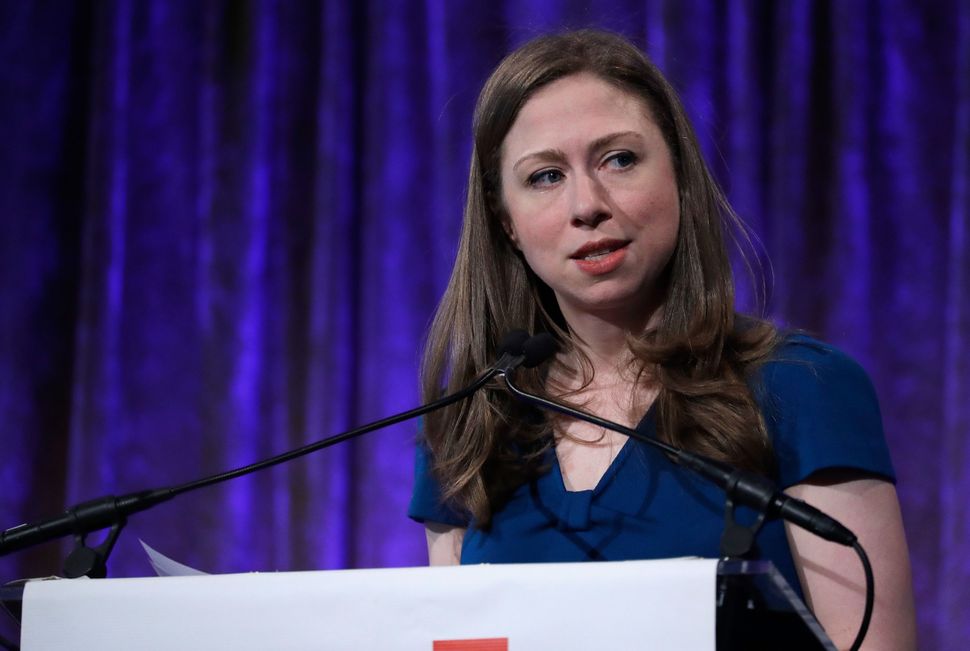 Chozick’s new book “Chasing Hillary” chronicles the Jewish writer’s experience on the campaign trail with Clinton and her family in the form of what Chozick calls, in her author’s note, “non-fiction.” She acknowledges that the book is “my version of events.” Earlier this week, Chelsea Clinton took to Twitter to call out Chozick for publishing things that are, according to Clinton, “false,” and accusing her of not fact-checking her information. “Everything I’ve heard thus far that you write about me didn’t happen,” Clinton tweeted to Chozick. Notably, the former first-daughter pointed out, Clinton didn’t “pop champagne” on election night, but rather was pumping breast milk. Also, she wrote, “I’ve never gotten hair keratin treatment.”

Hi @amychozick! Hearing there are more tidbits about me in your book which were easily fact checked and you fact checked…none of them. Here’s an easy one: I’ve never gotten hair keratin treatment. The others would have been equally easy!

Clinton is referring to the fact that in the book Chozick describes her as having, a common chemical hair treatment that uses formaldehyde or a formaldehyde alternative to break down the bonds in curly and frizzy hair. Clinton, who was tormented in the media throughout her childhood for her frizzy curls, is now only seen with smooth, voluminous hair. She has stated that her hair naturally relaxed as she got older — this is actually quite common in curly hair, which changes with age and hormone adjustment, especially when women give birth. And while it still wouldn’t be unsurprising if Clinton got keratin treatments, she claims that she hasn’t.

Hi Amy! The first sentence in the excerpt below is false – everything I’ve heard thus far that you write about me didn’t happen. We clearly have different definitions of nonfiction. Looking forward to your (belated) fact checking as relates to me. Thanks! https://t.co/Np3fZUAm7v

Asked by Slate about Clinton’s accusations of poor reporting, Chozick maintained (as she did in her author’s note,) that she used a “professional fact-checker” for her book, an uncommon practice even in nonfiction writing. Politely asking permission to elaborate, she said this:

In this Disney’s Splash Mountain-esque plunge into the world of stabby faux-feminism, Chozick flashes the world a look at her deep vulnerability and then slashes at Clinton’s honor, ending with a touch of tabloid journalism. “[I knew] a keratin job when I saw it” is not reporting, it is just a sad comment on the way men have succeeded in creating a crushing system of patriarchal dominance in which women are forced to make themselves a home.

This is all leaving some women wondering — will we as a society ever break free from this ever-widening gyre of hell in which drooling monsters get to be president while accomplished women politely snap at each other about the precise poisons they’re using to change their hair texture? And also — isn’t it likely that Chelsea Clinton just gets regular hair blow-outs?

At the end of the day we can only sigh and say this for Chozick — she has really pretty hair.

Birthday boy @mikiebarb with a big scoop and a pocket square today. ?