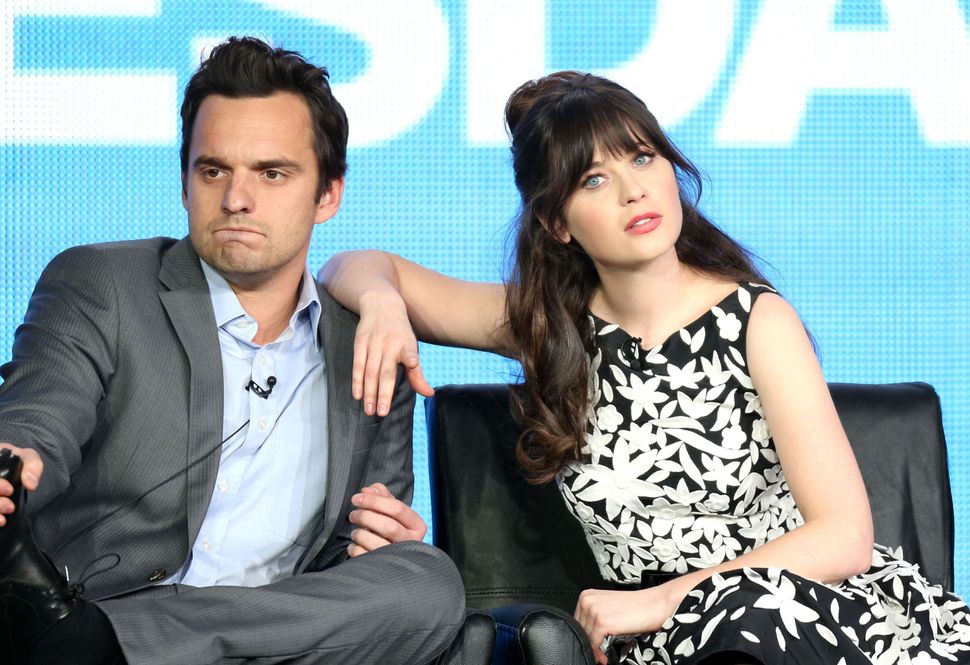 Non-Orthodox accuse Orthodox of harboring an antiquated fear of pets.

And the on Tuesday night on the “Fox” comedy “New Girl,” a group of non-Jewish friends celebrated a deceased cat’s Jewish headstone unveiling ceremony, to the dulcet tones of Enya.

Some people feel it is nice to be represented, others feel it is heresy. Both are legitimate.

An unveiling is a Jewish practice in which mourners gather, typically near the first anniversary of death, and conduct a small ceremony to unveil the deceased’s gravestone. And in the final season of the underrated Zooey Deschanel-vehicle “New Girl,” a group of close friends find themselves on a rainy day participating in a ritual Jewish gravestone reveal for a cat who identified as one of the tribe.

In the opening of the fourth episode of the seventh season of the show, pamphlets bearing the image of a cat and the words “In loving memory of Furguson,” are passed from mourner to mourner. Attendees of the unveiling wear kippot, and the series’ excellent Jewish representative, Schmidt, officiates. “As you all know from my many emails and a sponsored tweet,” Ferguson’s owner, the hapless Winston Bishop, tells mourners, “I looked at Furguson as Jewish. So in the Jewish tradition, we unveil his gravestone on the first anniversary of his passing.”

So how kosher is the “New Girl” unveiling?

Without getting into the it’s-for-a-cat situation, let’s take a look:

A headstone unveiling is a traditional Jewish practice — a minhag, not an obligation. That means that it’s not easy to mess up because it doesn’t follow hard and fast rules. The “New Girl” characters said they were gathering, per tradition, a year after the cat’s passing, but the informal ceremony may occur during shloshim (first month period of mourning) or on the 11th month of mourning.

An unveiling ceremony simply calls for family and friends to gather and remove a light cloth from the headstone. The rabbi consulted for this article says that of the hundreds of unveilings she has officiated, headstones have always been covered in cheesecloth, an airy fabric used in the production of cheese. It is nice to know that cheese is present, even in death. But the “New Girl” set used a heavy black cloth. It would be no use in cheesemaking whatsoever, but it does lend to a dramatic flourish.

It is customary for mourners to first read from psalms or other prayers, and recite the prayer of mourning, El Malei Rachamim (God, Full of Compassion) and the mourner’s kaddish. The brief service may be officiated by a rabbi or a lay-person, and usually involves eulogizing, reflection, and song. The “New Girl” cat unveiling was officiated by mourners, which is not untypical. Schmidt uses a thick blue prayerbook which looks like it could be the Reform siddur “Mishkan Tefilah.” He leads the congregation in the mourner’s kaddish — they are far beyond the size of an egalitarian minyan, though the demographic of Jewish adults in the crowd is unknown.

Since the episode cuts to a commercial here, it’s not possible to know what happens at the graveside event, though the action continues to a full scale post-unveiling reception event for the cat at a nearby bar. However, it feels likely that the unveiling excluded the recitation of El Malei Rachamim, as it is unlikely to have been known to the observantly lax Schmidt.

It is thrilling to see Jewish ritual practices portrayed respectfully through art. Havdalah next, please.