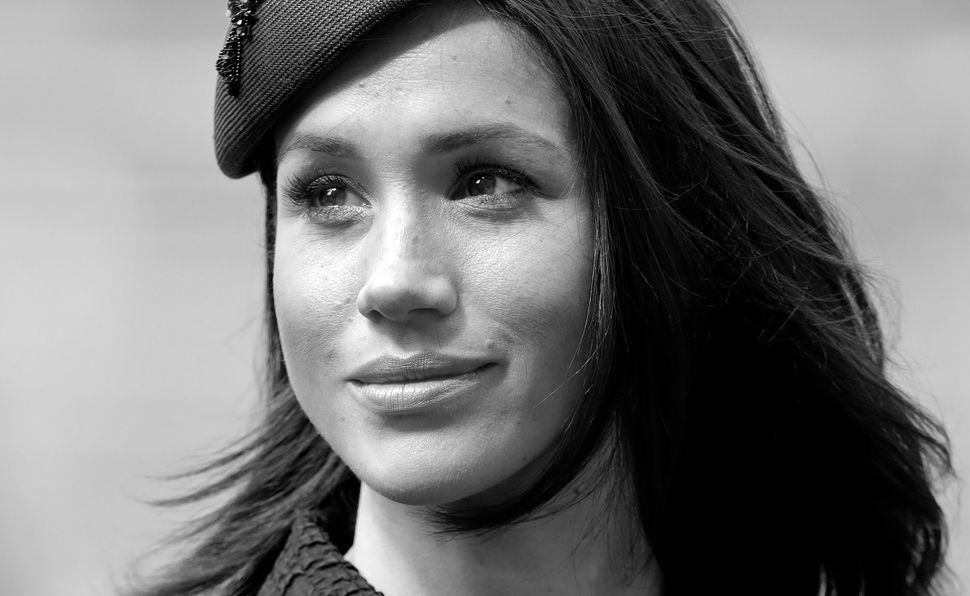 It was with a somberness bordering on despair that we learned last year that future royal Meghan Markle is not Jewish. It hit us like a Roman centurion hitting the Second Temple: Meghan Markle would never attend a Jewish wedding in the church of England.

(^Those were the days)

Except Meghan Markle did attend a Jewish wedding in the style of the church of England. When Markle’s best friend Lindsay Roth got married in 2016, her wedding was a blend of Jewish tradition and Church of England customs. And Markle was her best woman.

Markle and Roth became best friends when they met at Northwestern University in a Toni Morrison literature class in their first year of college. Roth is a television producer who has worked for Larry King and wrote a novel, “What Pretty Girls Are Made Of” in 2015.

Can you guess who shows up in the book’s acknowledgements?

Roth thanks Markle, a member of her “core four,” writing that their “rare, deep friendship is overwhelmingly precious.” She also wrote that even though both women are “more successful than we were fifteen years ago … at our cores we haven’t changed.”

Roth and Markle have been together since long before Markle’s stint on “The Price is Right” and star turn on “Suits.” They vacationed together, took each other to fashion shows, and took discrete videos with Elton John together. Roth supported Markle through her launch of her lifestyle website, The Tig, and Markle supported Roth through the publication of her novel. Once, for reasons unclear, Roth has tagged Markle in social media posts with the hashtag “notkosher.”

According to Markle scholars (yes, they are real,) as Roth’s maid of honor, Markle planned the bachelorette party, a vacation on the Greek island Hydra. Markle wrote on her lifestyle blog, “There is something wholly cathartic about being able to turn it all off — to sunbathe with no one watching, swim in the briny Mediterranean Sea, eat copious amounts of Greek salads and fried red mullets and toast to the day.” Markle also arranged for Roth to fly to Toronto to have her wedding dress specially fitted at Kleinfeld’s.

Alas, it was announced on Friday that Meghan Markle will not have a maid of honor at her wedding. According to a spokesman for Kensington Palace, “She has a very close-knit group of friends, and she did not want to choose one over the other.”

We will have to live off this story instead: in 1998, Meghan Markle’s future best friend Lindsay Roth was a guest on Joan Rivers’ radio show. The topic? Monica Lewinsky.

That’s enough Jewish woman star power to last us at least until Prince Louis gets married.