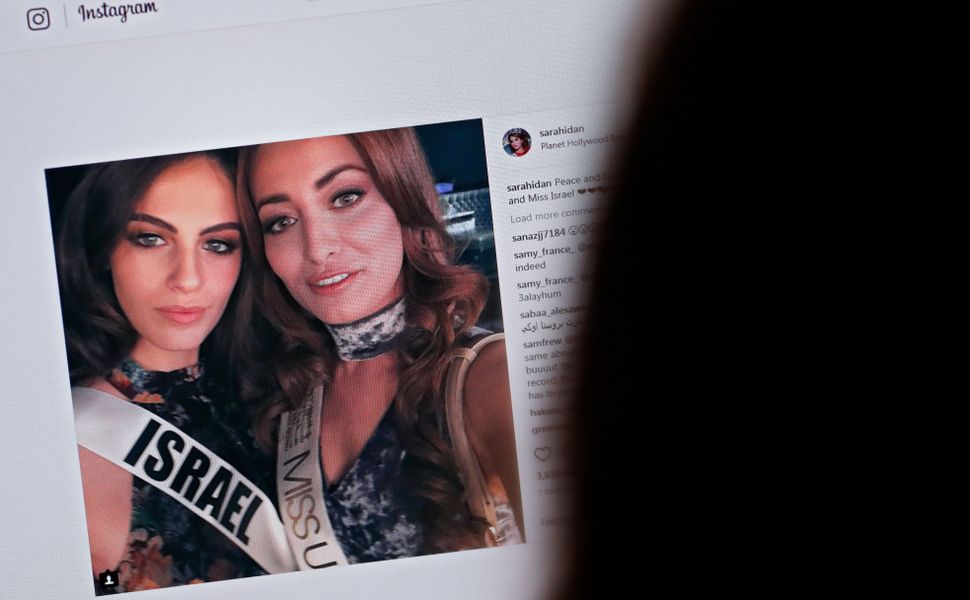 A fan examining the image Gondelsman of Israel and Idan of Iraq posted of their meeting. Image by Getty Images

Beauty pageant contestants often claim that all they want is world peace.

Adar Gondelsman of Israel and Sarah Idan of Iraq may actually get us there.

The two women met over the summer at the Miss Universe competition in Las Vegas. They hit it off and took a selfie, which each woman posted to Instagram. “Peace and love from Miss Iraq and Miss Israel!” Idan captioned her photo, while Gandelsman wrote, “Get to know [sic] Miss Iraq! She’s amazing.” Gandelsman received public commendation from Israeli officials for the post. But Idan, who said she never expected blowback for the images, told CNN, “I woke up to calls from my family and the Miss Iraq Organization going insane. The death threats I got online were so scary.”

Despite Idan publicly declaring that her post was not intended as support for the Israeli government, but “to express hope and desire for peace between the two countries,” she received death threats. Nevertheless, Idan refused to take down the photo. Though she and her immediate family have long resided in the United States, members of her extended family were forced to flee Iraq due to threats surrounding the photo as well as Idan’s appearance in the competition in a swimsuit.

This week, on invitation from the American Jewish Committee, Idan visited Israel for the first time and reunited with her friend Gandelsman at the Waldorf Astoria in Jerusalem.

“Sister’s reunion,” she captioned their new photograph, this time taken at a photo shoot for the two women. Idan said that when they first met Gandelsman had voiced her fear about talking to Idan. But then, Idan said, “We sat down and talked for hours and hours.” They also posted a short video, each saying hello in the other woman’s language. “I don’t think Iraq and Israel are enemies, I think maybe the governments are enemies with each other,” Idan told an Israeli reporter. “But there’s a lot of Iraqi people that don’t have a problem with Israelis.”

Idan, who was the first woman to represent Iraq in the Miss Universe competition in 45 years, has continued to tour the city. She visited sites in Jerusalem and posted a photo of herself eating at a Jewish Iraqi restaurant in Mahane Yehuda. Walking around the market, Idan met many Iraqi-Israelis, one who told her that she would like to return to her native country some day.