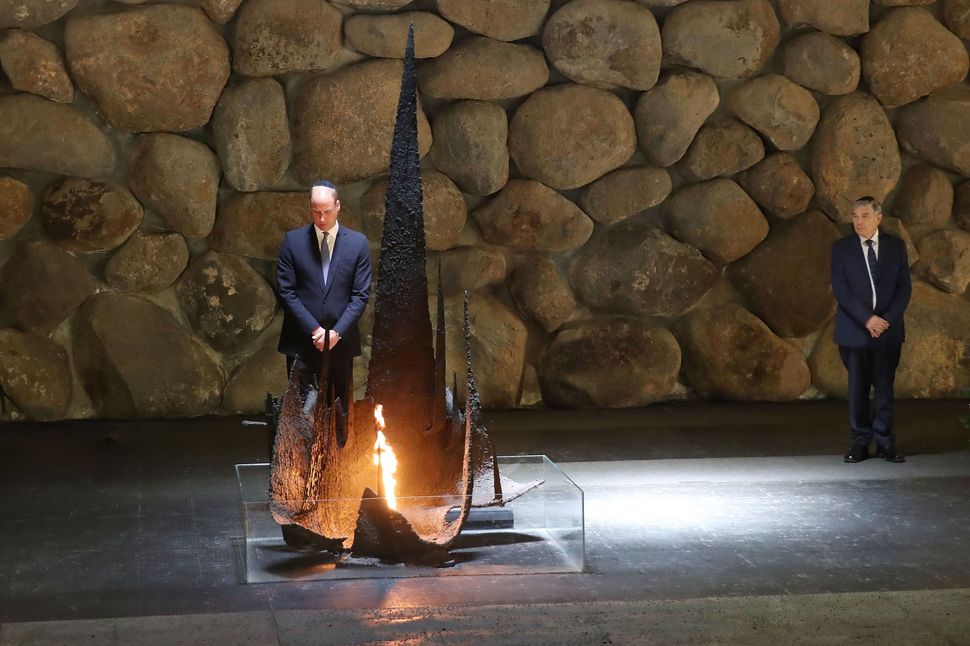 Prince William visited Yad Vashem, Israel’s Holocaust museum and memorial, as part of his visit to Israel on Tuesday. American leaders who have visited the sight have venerated it — Hillary Clinton called Yad Vashem “a testament to the power of truth” and President Obama wrote that it serves as “a powerful reminder.” George Bush used the opportunity to bless Israel, and Donald Trump called the museum “awesome.”

Prince William, however, called his visit “terrifying.” He wrote in the museum’s guestbook that the “horror of the past,” the murder of six million Jews “just because they were Jewish” must be taught again and again, so that it will not be repeated.

Prince William is a monarch, the ultimate elite. But the way he related to the Holocaust was so human, and it’s an opportunity to highlight a painful emotional dissonance that affects many students of the Holocaust: Learning about the murders of six million people doesn’t always feel sad. And it shouldn’t feel exclusively sad. Sadness is important, but it’s passive — it’s a feeling we generally experience in reaction to an event happening to someone else.

But terror, horror, abject fear — those are the visceral emotions we experience when we ourselves are in danger. To grasp some understanding of the Holocaust, those are the emotions we must put ourselves through. They give us a sliver of a feeling of what it would have been like if it had happened to us.

Feeling not just sad, but terrorized, is a non-negotiable part of a good Holocaust education.

But attempts to memorialize and study the Holocaust, too, are easily dragged into this category and used for a kind of mournful self-pleasure. Crying can become a kind of social currency — external proof of a complex inner life and emotional sensitivity. Crying is a physiological reaction that scientists don’t really understand, but it’s treated, too often, especially around Holocaust education, as a badge of honor.

It’s not pleasant to admit, but it happens. And how could it not? When we bring people, particularly teens and young adults, into Holocaust museums, we want them to comprehend the loss of six million people — we want them to feel six million “sadnesses,” but they can’t. As I’ve gone on teen trips to Holocaust museums all over the world, including several trips to Yad Vashem, I’ve observed that most conversations surrounding the visit are not “how could this have happened?” but more along the lines of “I cried so much!” Or sometimes, usually with a lot of guilt, “I didn’t cry at all.”

This cheapens one of our most vital history lessons and personal pilgrimages. No one, Jewish or not, should feel focused on performing their response to the Holocaust, and no one should feel like a fraud while trying to develop a personal relationship with history. But more importantly, the emphasis on feeling sad at Holocaust museums obscures the value of paying respect to history.

Yad Vashem, with its narrowing walls, distant sunlight, and violent images around every corner, evokes feelings of horror. The museum itself is a single long hallway that can only be navigated by entering every room — once you enter you cannot leave until you have witnessed everything. There is no escape. There are no windows. It is designed to terrify. Everywhere you walk you are haunted by children who do not know they will soon die, singing “Hatikvah,” the anthem of a land they will never reach. You feel surrounded, and overwhelmed. You feel steeped in horror.

If you have not seen yourself as if you truly went out of Egypt, you haven’t celebrated Passover. And if you haven’t, in your studies, felt terror, you haven’t really studied the Holocaust. We should be horrified — as William was — and vow to learn from it.