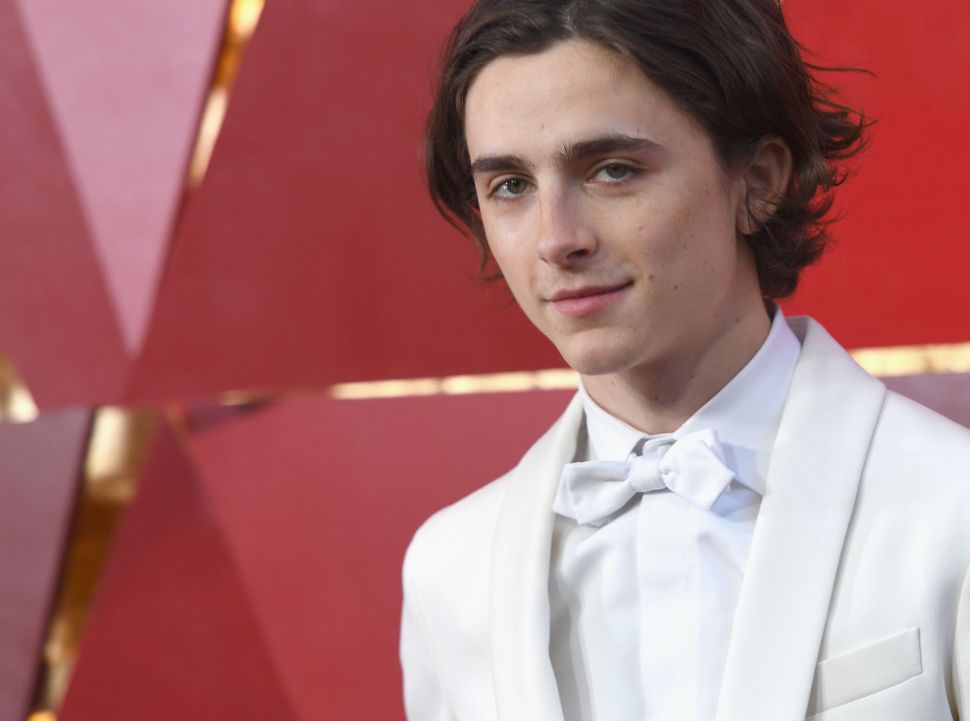 Timothée Chalamet at the 2018 Oscars. Image by Kevork Djansezian/Getty Images

Do you like movies? You’re in the right place. Read on for the best, worst and weirdest of this week’s movie news, from the first trailer for “Beautiful Boy” to Scarlett Johansson’s quashing of a weird rumor about her and Tom Cruise.

1) Timothée Chalamet and Steve Carrell want to break our hearts

Do you love to cry? Good news: The upcoming film “Beautiful Boy,” in which Carrell plays a father attempting to grapple with his son’s (Chalamet) drug addiction, looks like it will wring tears from you by force. In a new trailer for the film, based on the memoirs of father and son David and Nic Sheff, Carrell and Chalamet offer hints at powerhouse performances. “Although the trailer clocks in at 2:39 minutes long, those 2 minutes and 39 seconds created sensations of heart wrench, empathy, longing and the search for hopefulness within me,” writes Nicola Sheff for the Forward. “Immediately after watching the trailer, I felt an attachment to the story of David and Nic, desperate to know of the light at the end of such a dark tunnel.”

Ofir Raul Graizer’s debut narrative feature “The Cakemaker,” a drama about love, lust, loss and cake — an eternally well-matched quartet — is generating awards buzz, and opens in the U.S. this weekend. Michael Kaminer spoke to Graizer for the Forward, discussing how to shoot a movie on a shoestring budget, the particular allure of Jerusalem and, most importantly, how to make baking look sexy. “Baking is erotic and sensual,” Graizer said. “I can look at it for hours. The dough looks like the color of the skin, the kneading and working is like making love, and even the decorations are gentle, like a painting.”

It’s the year of celebrity Mad Libs: Ariana Grande and Pete Davidson! Priyanka Chopra and Nick Jonas! What better time for a truly bizarre rumor to surface about Scarlett Johansson and Tom Cruise? According to former Scientologist Brendan Tighe, who once worked on security for Cruise, Johansson’s name cropped up on a list he once saw of women “auditioning” to be Cruise’s girlfriend. (Tighe dished this to Megyn Kelley.) Johansson quickly denied Tighe’s account, rightfully decrying it as sexist. “All in all, not the most flattering rumor,” Jenny Singer writes. “But true or false, isn’t every first date an audition? Johansson, who is Jewish (as we never tire of reminding people) is now dating Saturday Night Live writer and performer Colin Jost. We like to think he went through quite a lengthy audition process before dating her.”

I have yet to see the new Netflix rom-com “Set it Up,” so I refuse to read past the first two paragraphs of Jenny Singer’s mildly spoiler-filled declaration of its cultural significance. “We bring it to your attention because it was written by Jewish screenwriter Katie Silberman, stars Jewish actress Zoey Deutsch, and features Jewish pinup boy and America’s fiancé Pete Davidson,” Singer writes, “not to mention former-Israeli-ambassador-to-the-United-States Michael Oren’s nephew Jon Rudnitzky (yeah, that’s right).”

5) “Clueless, the Musical” will win our hearts

In 2018, the only good thing is nostalgia, hence plans for a musical adaptation of “Clueless” to hit Broadway. “The New Group production company announced that the musical will come to Broadway in November 2018, and we don’t doubt that fans of the 1995 teenage classic will be desperate to snatch up some tickets,” writes Nicola Lewis for the Forward. “The show has been adapted for the stage by the remarkable [Amy] Heckerling, and all the music will be parodied 90’s pop hits.”

Last Sunday was the 18th annual Black Entertainment Television Awards, and Haddish won big. “America’s sweetheart Tiffany Haddish won Best Actress in a stacked category that included Angela Bassett and Lupita Nyong’o,” Jenny Singer writes. “Haddish, who has the beauty, charm, and talent of Jennifer Lawrence without the feeling that she was developed in a lab, won the nation’s heart this year in ‘Girls Trip,’ and on Saturday Night Live.”