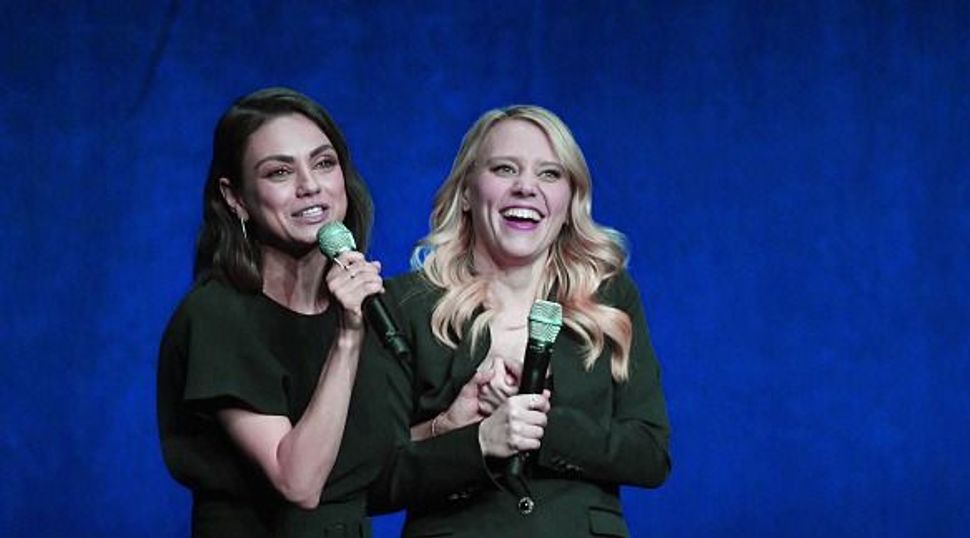 Since the beginning of her relationship with Ashton Kutcherin 2012, Mila Kunis has had her relationship, marriage, and eventually the births of her two children plastered all over the tabloids. Everyone wants to know what’s up with her and her seemingly idyllic life. And admittedly, we are no exception. But what seems the most idyllic of all? Her loving and hands-on Jewish parents, who brought Kunis to the USA in 1991, fleeing from rising antisemitism in the USSR. We feel that if tabloids plan to be invasive, they ought to be scrounging up a little more news on this topic. But we digress.

For the August publication of “Cosmopolitan” magazine, Kunis takes the front cover and tells all, addressing pregnancy rumors and giving us intel on her marriage to fellow Hollywood star Ashton Kutcher.

Kunis states that she doesn’t read news and gossip about herself, “I genuinely don’t know what’s written about me…other than I know that I’m pregnant about once a year and my husband and I are getting a divorce once a year.” So, Kunis takes this platform to remind us to not believe foolish rumors, and to ignore them just like she does. But can we really help ourselves? After all, if one of our favorite Jewish actresses is pregnant, we want to be the first to know!

Mila Kunis is our August cover star! ? The actress opens up about social media, crazy tabloid rumors, and taking on life with husband Ashton Kutcher in an interview with costar (and friend!) Kate McKinnon: https://t.co/UOLah0whvn pic.twitter.com/K4jrnhMa0o

Kunis addresses her social media silence, her abhorrence towards the gossip and rumors spread in tabloids and why she chooses to disconnect herself from that part of being fame. She also comments on her husband’s opposing advocacy for social media: “He used to be incredibly forward-thinking with social media, when the intent was to connect to people. But it took an ugly turn and became all about who can be the loudest, who can be the angriest and the most negative.”

What’s more, although we may not be able to relate to her red-carpet lifestyle, we find comfort in knowing that Kunis shares the same experiences with neurotic Jewish parents as us. Kunis states that “my dad is always very hopeful that the pregnancies are true”, which is more or less what our dad would say in response to baseless rumors about our fertility.

We look forward to reading the rest of her interview and learning more secrets about her fascinating life. And who knows, maybe we’ll gain some tips on juggling a career, kids and handling loving Jewish parents.