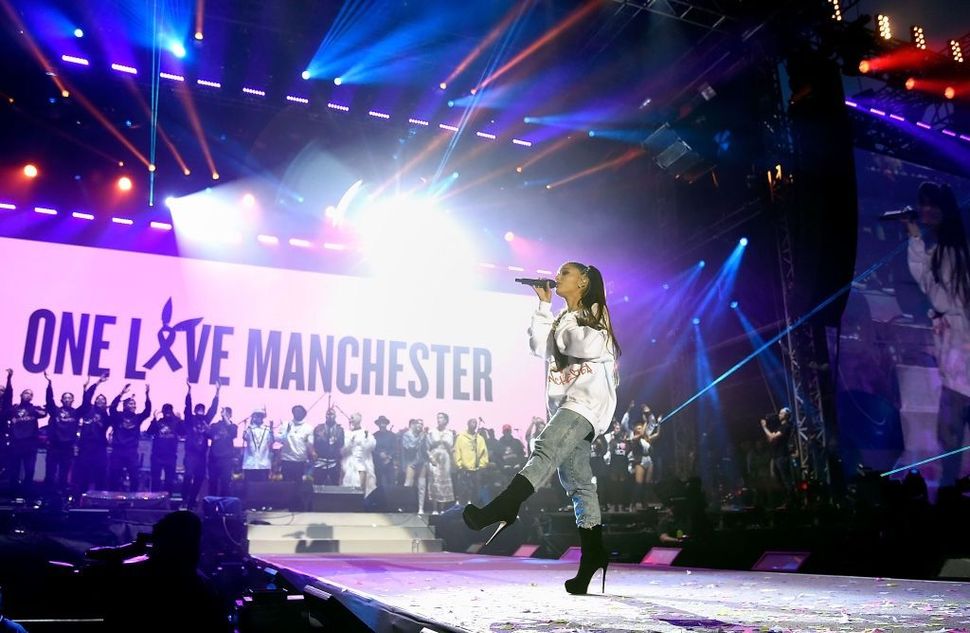 Ariana Grande has finally responded to criticism that resurfaced this week over a highly insensitive comment that her fiance, Pete Davidson, made last fall during a stand-up appearance. He spoke about what must have been a serious reality check for Grande after the Manchester bombing at her 2017 concert: “Britney didn’t have a terrorist attack at her concert.”

Charlotte Hodgson, one of the mothers of the bombing victims, spoke out against Davidson, calling his remark “disgusting” and“heartbreaking” and has demanded that Davidson release a public apology for his tasteless comment. However, Davidson’s rep released a statement in which he explained that Pete Davidson “is a comedian. No subject is off limits and that includes jokes about his father and 9/11.” Since that statement, Davidson has declined to comment further.

Ariana has previously spoken about her severe PTSD after the terror attack at her Manchester concert. She also has a tattoo of a worker bee inscribed behind her ear in honor of the victims that perished at her concert (the worker bee is a symbol of Manchester).

One of Ariana’s fans tweeted her dismay with Davidson:

I respect Ariana and I want her to be happy and everything, but she was just broken after the Manchester bombing, so I don’t know why she is still with Pete, like yeah he made that joke a while ago, but like it’s not funny, it’s just rude. This is my opinion.

Over the past 2 months, Ariana and Pete have embarked on a whirlwind journey of infatuating romantic bliss, from PDA, to uploaded cozy shots on the ‘gram, to tattooing their bodies in a show of affection for one another. We, along with the rest of the general public, have been unable to turn away from the sudden and unexpected courtship-turned-engagement and have watched it all go down with bated breath, wondering what their next surprise move will be. We have rallied for the relatively unknown Davidson, who has skyrocketed into an overnight sensation due to his romance with the famed pop-star, but we, too, were disappointed by his crass joke.

Ariana finally spoke out about the controversy surrounding her fiance on Thursday, saying that he indeed had taken it too far. However, she did defend her husband-to-be, claiming that he chooses to use humor as a coping mechanism:

this has been v tough & conflicting on my heart. he uses comedy to help ppl feel better ab how f-ed up things in this world are. we all deal w trauma differently. I of course didn’t find it funny. it was months ago & his intention wasn’t/ is never malicious but it was unfortunate

Tamar Skydell is an intern at The Forward. Write to her at skydell@forward.com