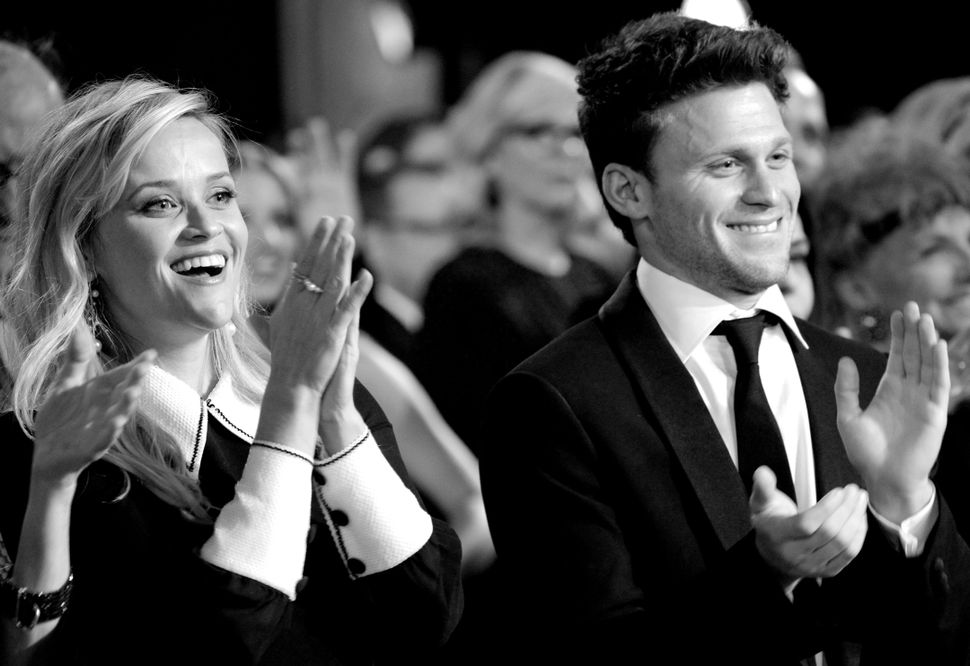 I had a torrid affair with former Israeli ambassador to America Michael Oren’s nephew, the actor Jon Rudnitsky.

It lasted 16 hours and existed entirely inside my head and I am hear to tell you all about it.

In an effort to avoid the crevasse of irrelevancy, I watched the made-for-Netflix romantic comedy “Set It Up,” which has been sweeping the nation.

“Set It Up” follows a pair of young, overworked executive assistants who plot to set up their bosses to lighten their work schedules. But the true heart of the film is the story of the female assistant’s roommate’s boyfriend.

That person is played by Jon Rudnitsky.

When Jon Rudnitsky appeared on screen, I knew he looked familiar. No, not just from my dreams, but from the Nancy Meyers movie “Home Again” with Reese Witherspoon. I watched that film once on an El-Al flight, which means that according to the Israeli Rabbinate, Jon Rudnitsky and I are technically common-law married.

I did a cursory google to confirm the man on my screen was the same sandy haired, squeaky-voiced youth who touched my heart through the grainy screen of the Boeing 747.

“Jon Rudnitsky,” the web browser read. I didn’t need to see more. We at the Schmooze love a Jon-without-an-‘h.’ But as I did a cursory scroll through his Wikipedia page, I read this:

His uncle (mother’s brother) is Michael Oren, the former Israeli ambassador to the United States.

That’s when I started imagining which of his crumpled white shirts Jon Rudnitsky might wear to our son’s bris.

Though I am no fan of Michael Oren’s policies, even I am not immune to the allure of power. I mean, we’re talking a former ambassador’s nephew here, guys! Michael freaking Oren’s nephew!

For those who don’t know, Michael Oren is a stunningly gorgeous Israeli-American politician who always looks like he should be breaking into an airplane cockpit to take out the terrorists. He was a fantastically brave soldier in the IDF and is an influential thinker. But lately, as he floats racist conspiracy theories about teenagers, I wonder if he may be skating through his career on his looks.

Jon Rudnitsky sounds and looks very similar to the child star of “Jerry Maguire.” His voice is a nasal drawl like an asthmatic summer camper. He looks like his mom put sun-in in his hair and like he’d hold your hand and weep gently with you as Hillary lost the election. He gives the strong impression that he is the kind of person whose closest friend in the world is a beautiful labarador with a human woman name like “Grace” or “Abby.”

The next day, I started showing off my new boyfriend, Jon Rudnitsky, to my co-workers. Such a sheyne punim! they said.

And then, just as I was considering which photo of him was the best to print out and keep in a locket close to my heart, one of them observed something — he looked a little like that comedian. You know, the one who was kicked off Saturday Night Live after one season, when they discovered super offensive jokes on his Twitter?

I felt my blood run cold. So this is how it feels to be literally stabbed in the heart by a monster, I thought.

The tweets, which Rudnitsky wrote in 2012, were not just homophobic and sexist, they weren’t even funny. They read like they were composed by a half-illiterate high school bully, moments before he carved a penis onto a bathroom stall wall. Why would anyone joke about assaulting the band Destiny’s Child? What kind of bully, 22 year-old or otherwise, feels the need to attack award-winning gay makeup artists?

Rudnitsky may have changed. Lots of people do, over the course of six years. These days his comedy seems more nuanced. The roles he takes are thoughtful — like the one in “Set It Up” where his character works to not slut-shame his girlfriend. And … he just seems like he has a really kind face.

Jon Rudnitsky, my dream lover and forever source of fascination, I would like to hear from you. If you’ve changed, please get in touch and let me know. If you want to make a formal debut as a woke-yet-still-blond comedian, the place is now and the time is here. I can also bring a lot to our relationship. I am medium-looking and I have read two-thirds of the novel Daniel Deronda. And I would like to learn if you’ve done teshuva.

Because, honestly — just look at this human labradoodle: