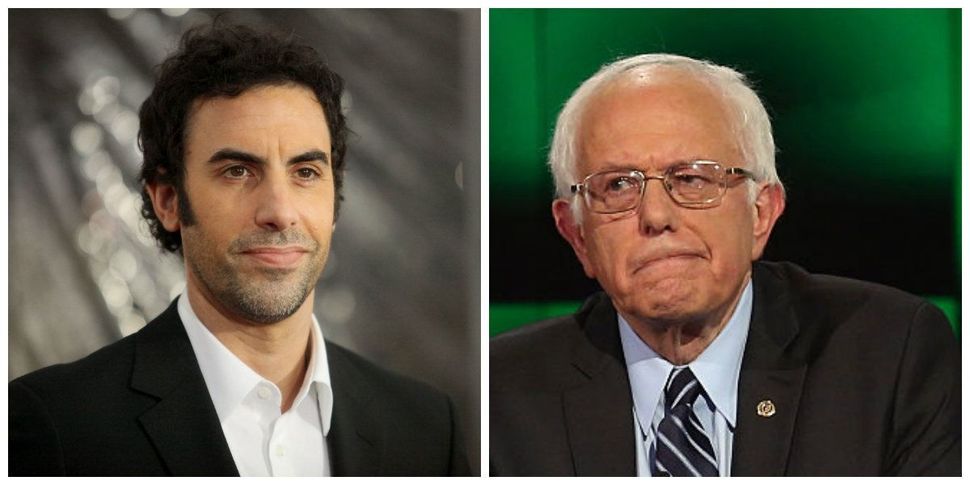 Reaching across the aisle, Sacha Baron Cohen released footage scamming both liberals and conservatives in the premiere episode of his new TV show “Who Is America” on Sunday.

In his opening interview as Billy Wayne Ruddick Jr., ph.D., with Bernie Sanders, Baron Cohen provided the best arena for Sanders’ patented side-eye since the advent of late capitalism.

Sanders, consenting to sit with the phony creator of “truthbrary.com” (a take on the word “library”) likely because of his association with Showtime, spoke with remarkable restraint to the concealed comedian, despite comments from Baron Cohen like, “I’d prefer to be anally raped rather than give one more dollar to the treasury.”

But as the two argued over the mathematics of percentages (can 100% of people be in the 1%? Maybe!) Sanders gave his eyeball so much free-reign he looked like an elderly, Jewish, Jim Halpert. As the costumed Baron Cohen, sporting two Trump buttons, an American flag pin, and a New York Times folded jauntily in the outer pocket of his electric scooter, continued to refer to the senator as “Bernard Sanders,” Sanders displayed the squinty eyeball dexterity that first made him an icon.

And a classic throwback for the road: