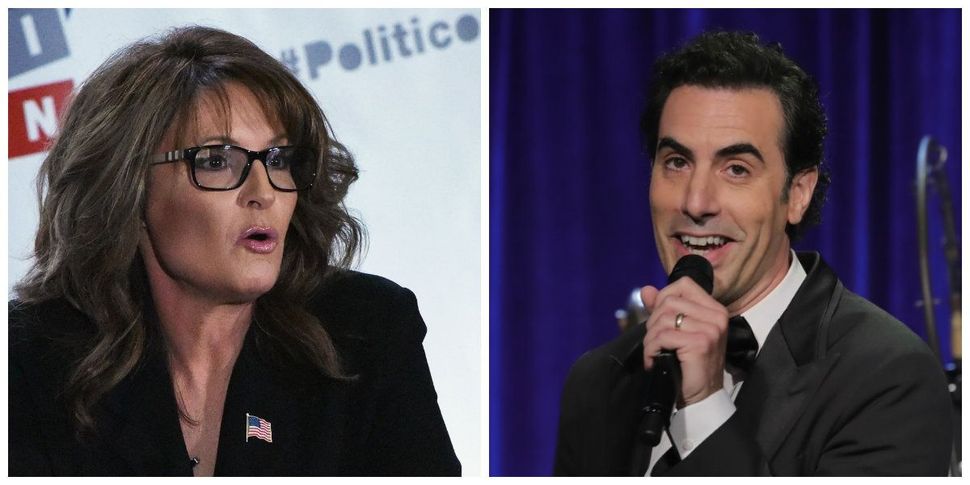 Poor, put-upon public servant Sarah Palin flew across the country last year with her daughter for a good cause, she wrote in a confessional Facebook post.

Showtime had asked her to participate in a documentary, an opportunity to honor American veterans. The man she met with was wheelchair-bound — he was dressed to look like a disabled US veteran. But, lo — he wasn’t a veteran at all. He was British comedian Sacha Baron Cohen, and he had disguised himself as an injured former soldier to lure her into an interview for his new Showtime comedy “Who Is America.” She walked out, never realizing the true identity of her interrogator, but knowing something just wasn’t right. In her Facebook post, Palin challenged Baron Cohen to air the embarrassing footage of her and donate the proceeds to a charity for veterans. “By the way, my daughter thinks you’re a piece of s**t, Sacha,” she concluded. “Every honorable American Vet should feel the same.”

Palin’s claim — that Baron Cohen impersonated a disabled veteran to secure an interview embarrassing the former vice presidential nominee — dominated headlines at most major publications, this one included. That the comedian could go so far for a joke was shocking, even to fans who know every lyric to “Throw the Jew Down The Well.” The scheme was polarizing, suggesting, among other things, that Baron Cohen must be wildly out of touch with the mood in American.

But when the first episode of “Who Is America” aired this Sunday on Showtime, viewers met all of Baron Cohen’s new characters. None of them are disabled US veterans. None of them resemble disabled US veterans. The Baron Cohen character Billy Wayne Ruddick Jr., Ph.D., who interviews Sanders in the first episode and reportedly will interview Palin as well, is not confusable with an injured US veteran. Yes, he sits in a motorized scooter, but that’s not sufficient evidence that he’s either disabled or a veteran — he tells Sanders that the goal of the scooter is to “conserve [his] body’s finite energy.” The character wears an American flag pin and speaks in a Southern accent. Strung around his neck is what appears to be a bullet. He sports two pro-Trump buttons. He doesn’t do well with percentages. He claims to represent a group called “Truthbrary” (ala “library,”) which uses a Confederate flag as its insignia, though its not clear if his interviewees were shown that image. There is no reason to conclude, based on his appearance or his identity, that he is a disabled United States veteran.

Showtime released a statement on Monday underscoring this point: “Baron Cohen did not present himself as a disabled veteran, and viewers nationwide who watched the premiere on Sunday can now attest to that,” the statement read. It went on: “Baron Cohen never presented himself as a veteran of the U.S. military to former Alaska Governor Sarah Palin during the booking process or during the filming of her interview, and contrary to her claims he did not appear in a wheelchair.”

So Showtime claims that Palin was not lured with the promise of speaking to a veteran, and that Baron Cohen did not dress as a veteran or claim to be one. We can see for ourselves that he did not. But Palin’s claim had almost a week to germinate. The only two options: Either Palin is so limited that she assumed a person with a Southern accent in a scooter must be a disabled veteran, or she baldly lied to drum up sympathy for her and antipathy for Baron Cohen and his enterprise.

Ironically, either way it is Palin who misused and maligned American veterans, not Baron Cohen.