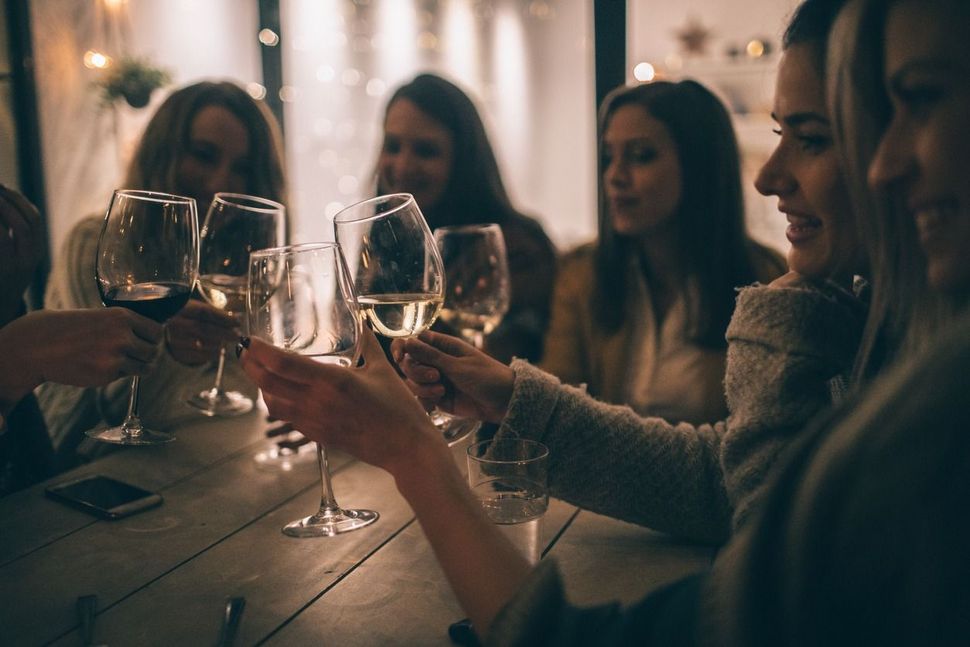 Editor’s note: This article was originally published on Tu B’av in 2018.

And if you’re not stomping grapes, chugging rosé, and falling in love dressed all in white while frolicking under the full moon and celebrating the right of women to own and inherit property, you’re doing it wrong!

Tu B’Av (pronounced “too-bih-ahv”) is the most fabulous minor Jewish holiday that you know nothing about. Named for the day of the full moon in the Hebrew month of Av, it’s an ancient practice. Its roots are biblical and its heyday was during Temple period, but it’s being revitalized in modern Israel and wherever Jews gather.

The earliest reference to this boozy dance-fest is in the Mishnah.

“There were no happier days for the people of Israel than the Fifteenth of Av and Yom Kippur, since on these days the daughters of Israel/Jerusalem go out dressed in white and dance in the vineyards. What were they saying?: Young man, consider whom you choose (to be your wife)

So, what we’re seeing here is that a) we may be doing Yom Kippur wrong, and b) Tu B’Av means dating, dancing and wine.

At risk of reading our modern ethos into Rabban ben Gamliel’s words, let’s note that women in this tradition have an agency that we don’t tend to see in ancient society. Men are the choosers and the couplings are heteronormative. But it is undeniable that the women have a measure of control and — even rarer — enthusiasm.

But it gets so much more feminist than that…

The Talmud gives a host of different explanations for celebrating Tu B’Av. One claims that it’s the day God forgave the Jews for building the golden calf, one claims that the holiday celebrates a decree that allowed Jews to make pilgrimage to the Temple, one explains that Tu B’Av was the day of the year the ancient Israelites had finally gathered enough wood to burn on the alter in the Temple, and one says that it is the day the Romans allowed an important burial to take place. Slay, ancient Jews.

But the best reason, the fiercest one, the one that would make a really great movie co-starring Gal Gadot and Natalie Portman, is this:

It celebrates the day in the Torah when the right of women to inherit land was legally recognized.

The story of the Daughters of Zelophehad in the Book of Numbers follows a group of sisters whose father dies, while the Israelites are still wandering the desert. The sisters go straight to Moses — they, as women, are not counted in the census, so they will not be able to inherit their father’s property. After they appeal in front of the community and God tells Moses that not only may they inherit, but also that this will set a precedent that fathers without sons will be able to leave their possessions to their daughters.

But don’t get too excited — there’s a strong sense that all of this is being done to honor the father, not the daughters. Plus, Zelophehad’s daughters are commanded to marry within their tribe to keep the property local. Like today’s women’s rights legislation, it just doesn’t go far enough. The change is incremental, not radical.

Today in Israel, Tu B’Av is like a low-key, sexy, Mediterranean Valentine’s Day. Bars and clubs invite patrons to dress in white, drink, mingle, and talk about the historical barriers against women’s economic equality. Well, not the last thing per se, but that’s up to you — you can have a regressive, paternalistic, heteronormative Tu B’av, or you can have a woke, wine-drenched one.

Tonight — drink, admire the moon, and decide what you are going to do to honor the legacy of the Daughters of Zelophehad.