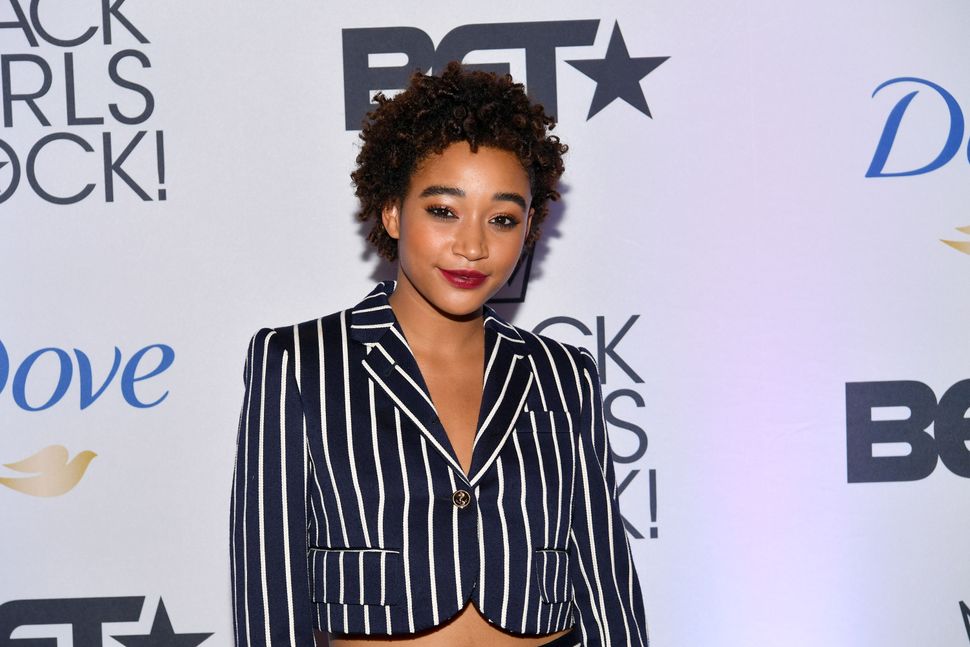 If you thought Western Civilization learned our lesson about forbidden romance after Romeo and Juliet, think again.

In her upcoming film, “Where Hands Touch”, Amandla Stenberg stars as a young girl who falls for a member of the Hitler Youth. These star-crossed German lovers were criticized moments after Variety featured a glimpse of the film in 2017. Critics said that the film, directed by Amma Asante, romanticizes Nazis. Asante instantly took to Instagram to educate viewers on her movie’s true intentions:

“This girl’s experience sits alongside the Jewish experience and the experience of others who were persecuted. It looks at how Germany became Nazi Germany and slept walked itself into a disgusting and murderous state that resulted in it killing its own people and those of other countries,” she wrote.

UPDATE: So many of you have had questions and concerns about this First Look image so I want to assure you that this film does not romanticize Nazis in any way. My full quote with the image clarifies that my passion has been to shine a light on the existence of the children of color who were born and raised under Hitler. These children were also persecuted and my wish has been to explore how black and bi-racial German identity was perceived and experienced under Nazi fascist rule. This girl’s experience sits along side the Jewish experience and the experience of others who were persecuted. It looks at how Germany became Nazi Germany and slept walked itself into a disgusting and murderous state that resulted in it killing it’s own people and those of other countries. Leyna’s story (Amandla Stenberg) sits in this sad and terrifying context. My reasons for making this film sit around my concerns of the current climate but also a continued and growing intolerance of racial and religious difference that we have all sensed for many years and which is becoming even worse now. As a filmmaker my wish is to center on bringing attention to this through my work. Amandla and i teamed together to shine a light on the hatred that Nazi Germany visited on Europe and to make a film that might contribute to the dialogue of how we fight this horrific racial and religious ignorance today along with the intolerances visited on the many other marginalized groups and intersections. With only a few lines and one image ever offered to a filmmaker to comment on a First Look image release, and with the lead character in this film embarking on such a large rites of passage story, it’s difficult to summarize all the things one might want to about a film in a brief article. Amandla’s role in this film brings attention to an as yet untold story in the arena of drama cinema, to the existence of the other ‘others’ who suffered during the holocaust. This does not mean that the Jewish experience is not also key to our story. It is. I hope that this at least clarifies some of your concerns. I have all the…(cont’d in following comment)

The 19-year-old lead actress also defended the intention behind the film. “I think it’s challenging for people to conceive of a story about the Holocaust that is not centered around the Jewish experience, but the experience of someone else. But I think what the movie does really beautifully is it demonstrates what happens with these tricky intersections of identity and how we still continue to be human and love and be loved, despite that,” Stenberg told Variety on Wednesday.

We know too well that the majority of people murdered during the Holocaust were Jewish. But this movie, like Asante said, will share the stories on other minority groups who were persecuted and killed by the Nazi regime. The actress — who also stars in the upcoming film, “The Hate U Give” — gently noted that these stories need to be told. “People don’t really know that biracial children existed then,” Stenberg said. “These biracial children were the children of French soldiers and German women who had fallen in love during World War I,” she explained. The star explains that her character, Leyna, gets sent to a labor camp along with other biracial children. “She lives an experience parallel to that of Romani people or disabled people or mentally ill people or outcasts,” Stenberg said. “Those who were not Jewish and were not sent to extermination camps, but were persecuted and forced to work.”

But…does she have to fall in love with a Nazi? Maybe the film will show how George Mackay’s character, the Nazi, was brainwashed through the Hitler Youth program. Or maybe he’ll save a life or two. We’ll just have to wait with open minds to see the film before we pass judgement.

Bonnie Azoulay is an intern for the Forward