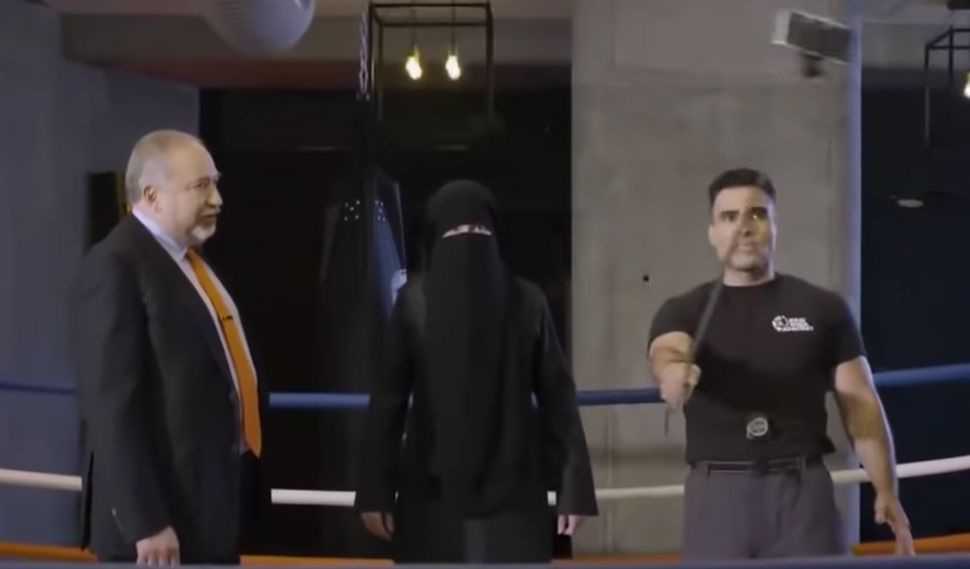 In what seems to be an attempted parody of a scene from Sacha Baron Cohen’s “Who Is America,” Israeli Defense Minister Avigdor Lieberman partners with krav maga instructor Matan Gavish to “fight terroristim” with techniques including lifting women’s burqas to take pictures.

In what Israel’s Association of Rape Crisis Centres director has called a depiction of the “sexual humiliation of Muslim women,” Gavrish demonstrates on a silent, burqa-clad woman how to lower an iPhone on a selfie stick below a woman’s skirt and take a picture. The video, which also explains how to “arm the baby” while still inside the womb, is being called a parody of a segment of “Who Is America.” In that now-famous scene, Baron Cohen, in character as ex-Mossad agent, Colonel Erran Morad, “trains” former Georgia state representative Jason Spencer in a series of defense maneuvers including threatening terrorists with the sight of his bare bottom, screaming the n-word, and doing an identical selfie-stick maneuver on a person wearing a burka.

Of course, the word “parody” is not quite right here — this is more of a loving video tribute and fan recreation. The video concludes with Lieberman telling Gavrish, “Leave us alone — we have the Israel Defense Forces, the best soldiers in the world. Happy new year to all the soldiers, and all the people of Israel!”

The video ends with Lieberman manfully wrestling Gavrish to the ground, as upbeat music plays.

It’s two minutes devoid of jokes, unless you like aging politicians pretending to harass religious women. If Lieberman’s base — hawkish Israel supporters — finds humor in this video, though, the joke really is on all of us.