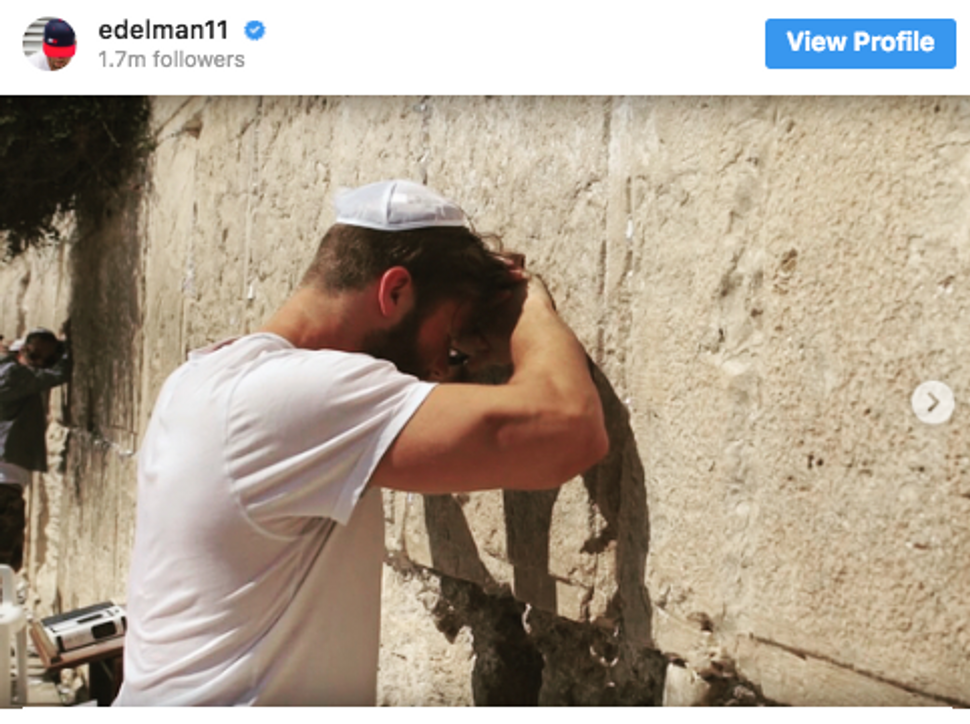 Say that sentence six times and your ancestors will rise from their graves and start a spontaneous hora.

Edelman, a 32-year-old native Californian and twice-winner of the SuperBowl, has been on a spiritual journey. The Pats star, raised mostly in the Christian tradition, has spent the better part of a decade rediscovering the Jewish roots on his father’s side — celebrating Hanukkah, embracing Zionism, and leaning into Jewish culture. In June, Edelman was treated to essentially a hail mary (if you will) Birthright trip by the Boston-based federation Combined Jewish Philanthropies. In a video from CJP, Edelman can be seen enjoying a charmingly hasbara-soaked 10-day pilgrimage throughout the holiest of lands, shouting “yalla!” (Arabic slang meaning, “let’s go!”) and slinging footballs.

It’s a very special time of year for both Pats nation and Jewish people all over the world with both Rosh Hashana and Yom Kippur. I’m usually in such an active mode around this time but this year I’m being more reflective and grateful. I’m so blessed to have a loving family, an incredible daughter and amazing support from the best fans in the world. Remember to let the people you love know that you love them and always be grateful for what you have. שנה טובה #ShabbatShalom ?????

In a touching Instagram post on Saturday, Edelman shared photos from the trip with a reflective caption that alludes to the longtime football star’s recent violation of the league’s performance-enhancing substance policy. Edelman, who will sit out four games as a punishment for the violation, wrote: “It’s a very special time of year for both Pats nation and Jewish people all over the world with both Rosh Hashana and Yom Kippur. I’m usually in such an active mode around this time but this year I’m being more reflective and grateful.” Shana tovah, he added in Hebrew, hashtagging the post “Shabbat shalom.”

To top off the spectacle of an American football star sharing a profound Shabbos-teshuvah greeting with his fans, the fans in question immediately devolved into an in-comments dialogue about the Israeli-Palestinian conflict. Bless them all, and may the gates of repentance and the field goal posts always be wide open to them.