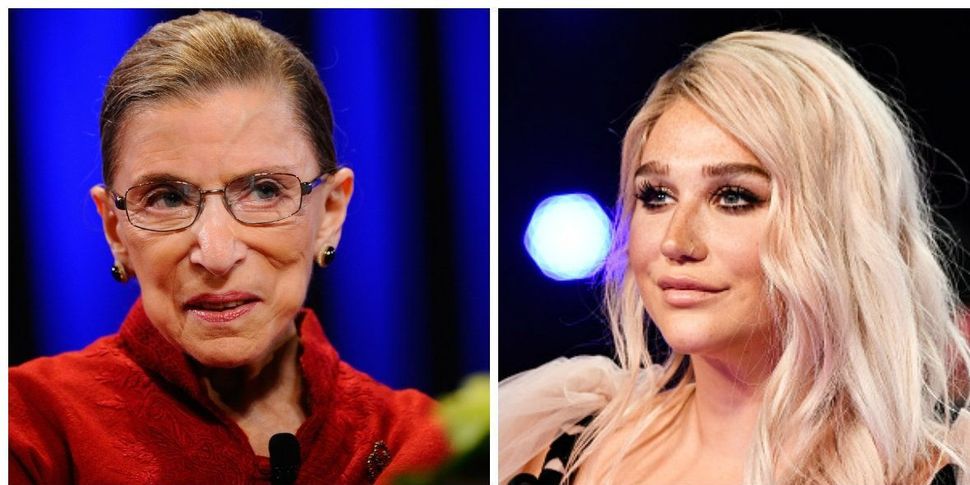 The shofar may be away for the season, but musician and feminist advocate Kesha has sounded a new call to action, in the form of her song “Here Comes The Change,” written for the anticipated Ruth Bader Ginsburg biopic.

Scoff if you want, but the woman who made a name for herself for waking up in the morning feeling like P. Diddy has more in common with Supreme Court Justice Ruth Bader Ginsburg than meets the eye. The 31-year-old singer became a symbol of feminist resistance in 2014 when she alleged in a lawsuit that music producer Dr. Luke, with whom Kesha had an exclusive musical contact, “sexually, physically, verbally, and emotionally abused” her for ten years.

New York judge Shirley Kornreich dismissed the case, citing the statute of limitations on the sexual assault claim, as well as a lack of evidence. Kesha ultimately dropped the charges, but her defiant single “Praying,” her first after four years of legal entrenchment, cemented her status as a public survivor and unlikely resistor. She wrote at the time, “I hope this song reaches people who are in the midst of struggles, to let them know that no matter how bad it seems now, you can get through it. If you have love and truth on your side, you will never be defeated.”

Now the reborn activist-artist has written another anthem of hope — “Here Comes the Change,” which was inspired by Ruth Bader Ginsburg and will be featured in the upcoming movie about the justice’s life, “On The Basis of Sex.” Kesha says when she was approached about writing a song for the movie (she collaborated with Wrabel and Drew Pearson,) she felt, essentially, imposter syndrome. “The idea that I should be writing about someone else’s life, and that person would be Ruth Bader Ginsburg, was intimidating,” she wrote in an essay for Refinery29. “How could my voice matter in this context? I thought to myself.”

Kesha — an icon and chart-topper — saw herself, ultimately, not in Ginsburg, but in her shadow. If one woman could change the world the way Ginsburg had, the least she could do was try to lend her voice to her cause. “I wanted to do what I could to pay tribute to Ginsburg, who has spent a lifetime fighting tirelessly for equality, with no signs of slowing down. I wanted to make my voice heard, too,” she wrote. The song is anthem-like — a perfect mix of bubblegum and folk-rock, with clear inspiration from Kesha’s “musical idol” Bob Dylan. It’s “The Times They Are A-Changin’” for the autotune generation. It’s Swift meets Dylan.

Kesha hopes, at the very least, it will inspire people to register to vote. “I hope the song and the video reminds you that we don’t all have to loom as large as these heroes to make a difference,” she wrote.