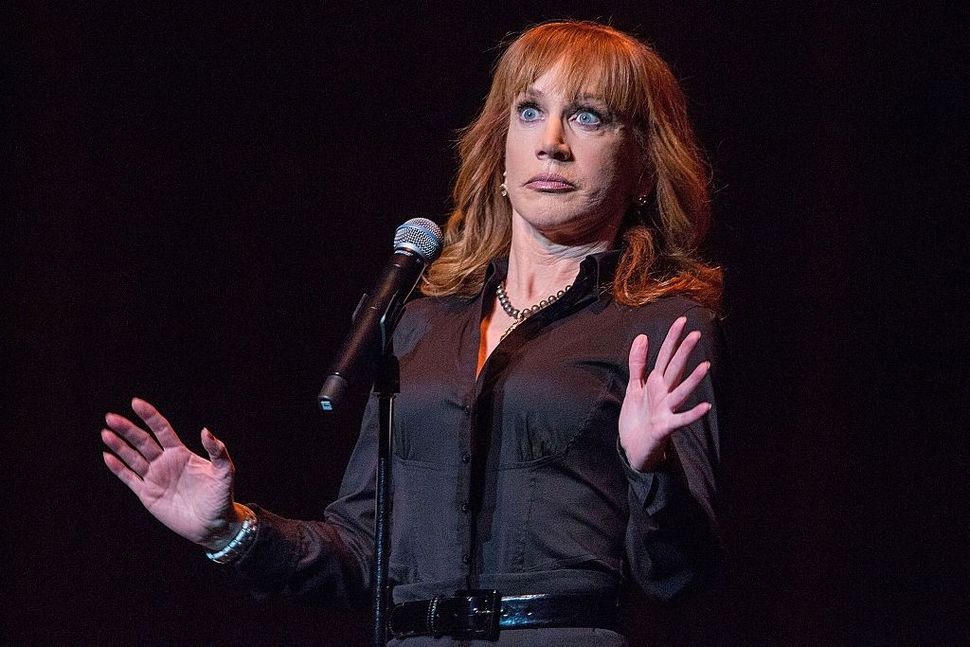 Don’t feed the trolls…even if they claim to like Jews.

In a textbook example of how fake news authors prey on readers’ fears, Pizzagate conspiracy-supporter Jack Posobiec birthed the untruth that comic Kathy Griffin targeted an Orthodox Jew with “anti-Semitic hate speech” by calling him a “cult member.”

In a Twitter interaction on Thursday, Griffin responded to a video tweeted in November by Joel Fischer, which shows a clip of a service member holding an umbrella over Barack Obama’s head, followed by a clip of President Trump returning a service member’s hat to him in a windy moment. Griffin wrote back, “Nice try you cult member. Here’s the real Trump, walking ahead of his wife and son with an umbrella leaving them in the rain. And here’s the real Obama, providing cover to two staff members under one umbrella,” under accompanying pictures.

Nice try you cult member. Here’s the real Trump, walking ahead of his wife and son with an umbrella leaving them in the rain. And here’s the real Obama, providing cover to two staff members under one umbrella.

Also, your president hasn’t been to Afghanistan to visit the troops pic.twitter.com/e7MnGD1dek

So far, so true — both Fischer and Griffin shared real, documented footage.

But then, Posobiec — called “the king of fake news” for his role in promoting the Pizzagate conspiracy and other stunts, like traveling to the gates of Auschwitz to send the ADL warning videos — got wind of the interaction.

First, he tweeted the conversation, with the added caption, “Kathy Griffin just referred to an Orthodox Jew as a ‘cult member.’”

This is true, of course. Griffin did call an Orthodox Jew a cult member — but not in reference to his Judaism. Griffin was undoubtedly referring to Fischer’s Trumpian political affiliations, not his religion. In fact, there’s nothing about Fischer’s Twitter bio or picture that suggests that he is an Orthodox Jew. Posobiec is stating something true, twisting the context, and hoping his followers read no further.

Why is this anti-Semitic hate speech allowed on twitter? pic.twitter.com/44C14UCNvz

Then he tweeted just Griffin’s tweet again, with the caption: “Roseanne was destroyed for her tweet about Valerie Jarrett. What will Kathy Griffin face after calling an Orthodox Jew ‘you cult member’?” This time there’s no context, so readers will assume that Griffin called a Jew a “cult member” for no reason. Now, Posobiec has made himself not just a case, but a case for hypocrisy.

Later in the day, Posobiec tweeted, lamenting the prevalence of fake news. “I don’t even know how to prove something is real in 2018,” he wrote.

And that’s how the fake news cottage industry targets Jews.