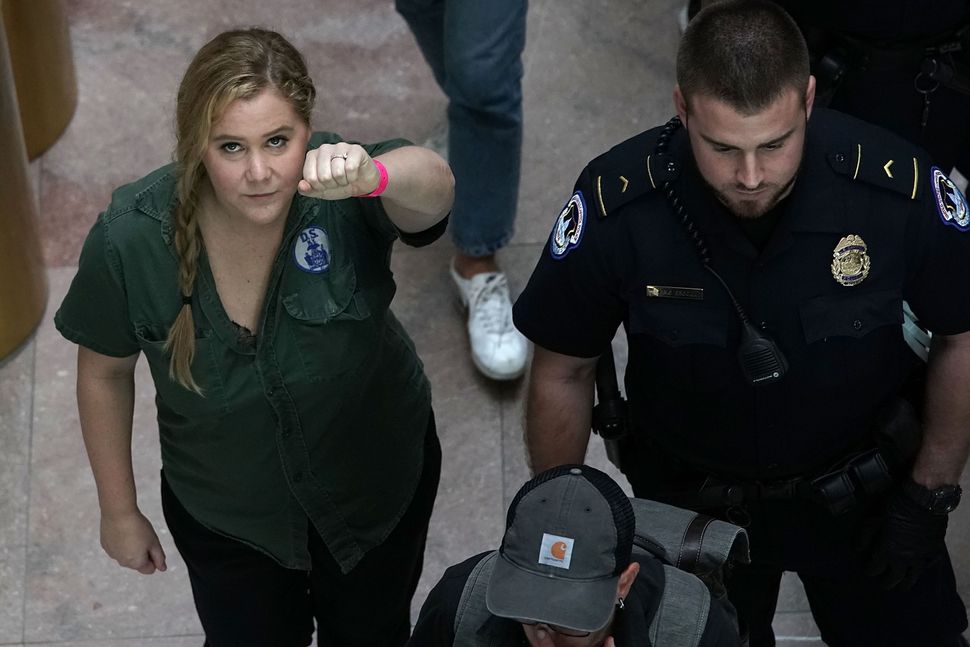 Amy Schumer appears to be among many who were arrested Wednesday at protests in Washington against the confirmation of Supreme Court nominee Brett Kavanaugh.

Schumer, an outspoken actress and comedian whose topics range from her butt to gun violence laws, was seen participating in an organized protest on Capitol Hill, Variety reports. Schumer stood in a gathering of other women in the Hart Senate Office Building that included Jewish model Emily Ratajkowski, holding signs and chanting slogans. In a clip posted by a Twitter user, Schumer stands in front of a man holding a sign saying “I believe survivors” and speaks to a fan whose mom she met at the protest. “I think we’re gonna get arrested,” she said, blithely.

Later, footage by MSNBC showed Schumer and Ratajkowski detained and parked against a wall, seemingly with their hands behind their backs.

Actress Amy Schumer is detained with other anti-Kavanaugh protesters at the Hart Senate Office Bldg. atrium on Capitol Hill. pic.twitter.com/C8N0k97ZE9

Schumer has long been politically active, often in concert with Senate Minority Leader Charles Schumer, who is her cousin. Lately, her activism has increased in pitch, with constant posts to social media providing support for sexual assault survivors and pleas to fans to vote. “We see you Dr. Christine Blasey Ford and everyone else who told the truth no matter what happens we thank you we love you we are you,” she wrote in a recent Instagram post.

You too, Amy. Thanks for showing up — we thank you, we love you.