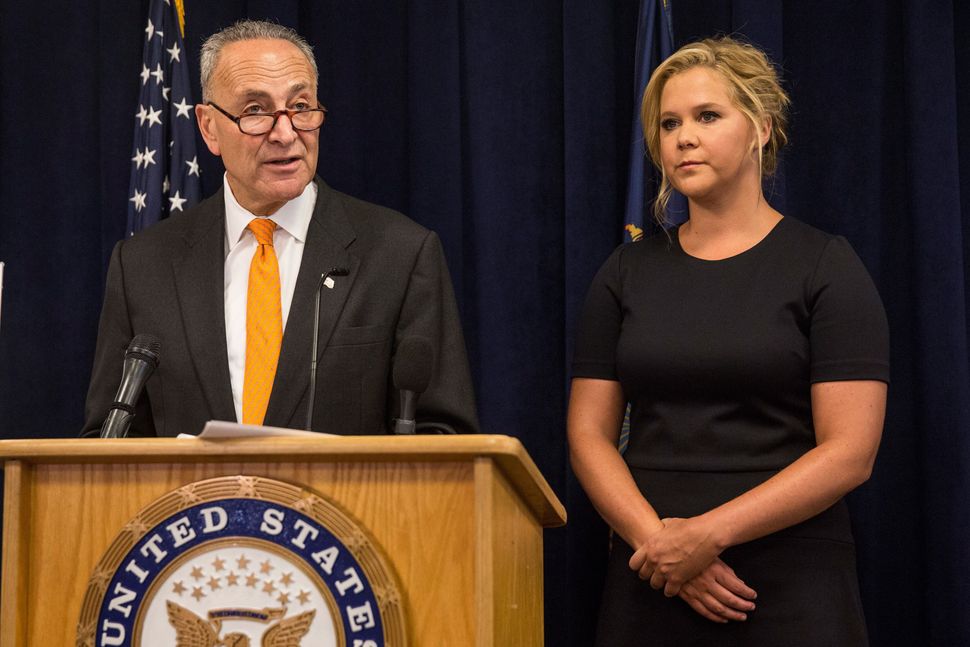 So, am I the only one who hadn’t realized that Amy Schumer and U.S. Senator Chuck Schumer were related?

Apparently, the two are . Which is great, because they’re reportedly teaming up to try and get politicians interested in curbing gun violence.

It all started when Schumer (Amy) received an open letter from Sarah Clements, whose mother survived the Sandy Hook shooting. Pointing to the recent shooting in Lafayette, Lousiana, during a screening of Schumer’s movie, “Trainwreck,” Clements called on the comedian to join colleagues Sarah Silverman and Kristen Schaal in pushing for gun control legislation.

“Your movie — which was so well-received, so brilliant, so you — will now forever have this shooting attached to it,” Clements wrote. “You’ve been caught in the middle of our country’s terrifying, unending war with itself, our sick and twisted relationship with the gun lobby, which tells us we need guns for anyone, anywhere, anytime. Search your movie “Trainwreck” on Google and a scroll-down suggestion will now be “Trainwreck shooting.”

The comedian tweeted a cryptic response over the weekend:

@cdickason11 @sfclem Her name was Mayci, not Marci and I think about her and Jillian everyday. Don’t worry I’m on it. You’ll see.

But another tweet by cousin Chucky on Monday, clarified things a bit.

74% of Americans want stronger background checks. Joining @amyschumer to call on my colleagues in Congress to finally listen. More at 11.

Sen. Schumer announced a new three-pronged plan and public push to crack down on mass shootings and gun violence. That includes introducing new legislation to creates monetary rewards for states that submit all necessary records into the system for background checks and creates penalties for states that don’t; urging the Department of Justice to write a comprehensive report comparing states’ standards for involuntary mental health commitment and give recommendations on best practices; and calling on Congress to preserve funding for mental health and substance abuse programs.

“These shootings have got to stop,” Amy Schumer said a press conference held with the other Schumer on Monday. “I don’t know how else to say it.”