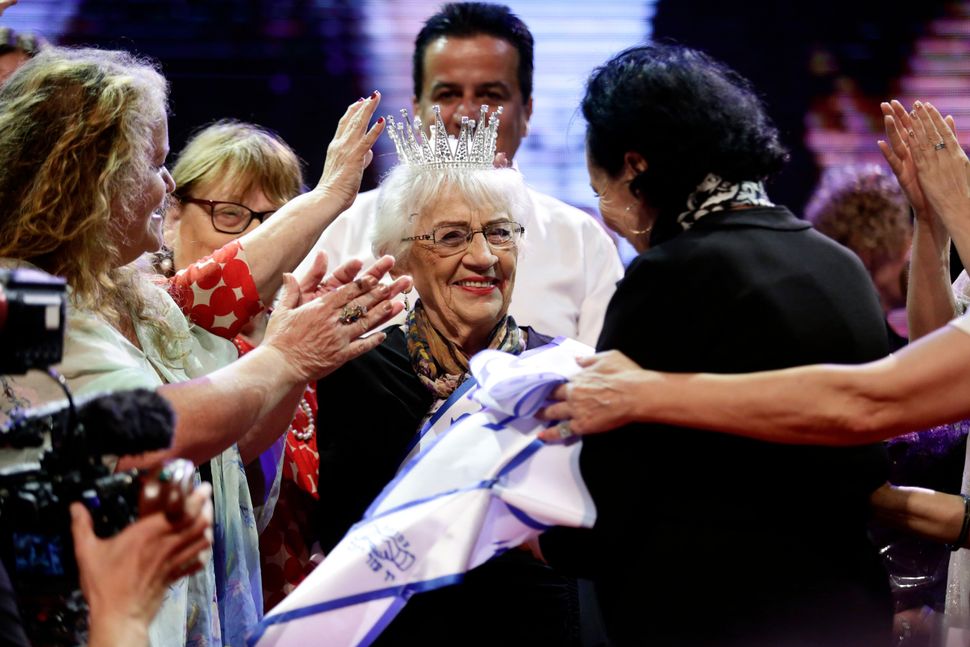 Truth is often stranger than fiction in Israel, a land flowing not with milk and honey but startups and bagged chocolate milk, where Gal Gadot can win a beauty pageant and so can 93-year-old great-grandmother Tova Ringer.

Ringer was crowned this year’s “Miss Holocaust Survivor” on Sunday at the annual competition at the Haifa Convention Center, Reuters reports. The pageant, which is in its seventh year, is thrown by the Yad Ezer L’Haver Foundation, a non-profit that supports Holocaust survivors in Israel living in poverty. “Who will be the 2018 beauty queen of the Holocaust survivors?” read press materials for the event. “This Sunday we shall know.”

The competition was fierce but friendly, as 13 survivors strode down the runway, some using canes or other assistance, as the most junior competitor was 74. Though the evening placed some emphasis on displaying the women’s beauty, the winner of the pageant is decided based on a holistic look at the women’s lives and work in their communities. In carefully applied makeup and perfectly coiffed hair, the survivors ate dinner alongside distinguished guests, enjoyed performances by Israeli artists Hanna Laszlo and Sassi Keshet, and listened as a choir of non-competing survivors (average age: 90) performed an original song about life in the ghetto.

Ringer, who was born in Poland and lost both parents and her grandmother to Auschwitz, seemed shocked and pleased to be the winner. “I wouldn’t believe that at my age I would be a beauty,” she said. “I don’t have words for the people working here. They gave so much heart for us,” she added. Ringer’s win is a departure from last year, when 75-year-old Anna Grinnis clinched the competition.

If the idea of a Holocaust-based pageant makes you cringe, get uncomfortable: Ringer told a reporter for the Russian media group Ruptly, “I came here the people were so nice, and I enjoyed it very much. And I’ll tell you why — where I lived — mein friends — I don’t have no friends. I’m the one from all friends…I’m the last one. And I came here…and, it’s something else! I was very happy that they invite me. And from first day, everybody likes me!” She described her children, grandchildren, and great-grandchildren as “angels.”

The emotional apex of the evening, perhaps, was not the crowning of the winner, but the words the choir shouted when their song finished: “We survived!”