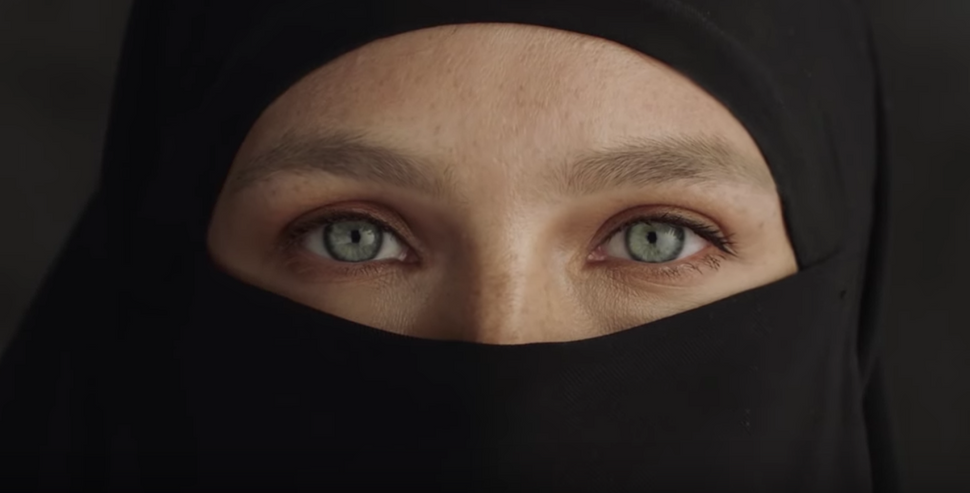 Bar Refaeli in an ad for “Hoodies” Image by youtube

Bar Refaeli is making headlines this week, being called “racist” and “Islamophobic” for her actions in a video ad for the Israeli athleisure company, “Hoodies.”

The campaign, titled “Freedom is Basic,” begins with a close up of a woman’s face shrouded in a niqab, a traditional facial veil worn by some Muslim women. “Is it Iran here?” the screen reads in Hebrew. As the camera zooms out, the woman rips off the black niqab and is revealed to be Bar Refaeli wearing a colorful cropped hoodie and jeans, flipping her hair over her shoulder. “It’s all about freedom! Constantly breaking the chains!” a singer’s voice blares.

After the ad was posted to Refaeli’s Facebook page on Monday, the model and the brand experienced “freedom” of speech, with thousands of people criticizing the brand and the model on social media. “I am so bored of this fake bulls**t about burka wearing women being oppressed and needing freedom with the white woman being their saviour. There are Muslim women who wear this out of choice, so stop disrespecting that freedom of choice,” [one popular tweet](

I am so bored of this fake bullshit about burka wearing women being oppressed and needing freedom with the white woman being their saviour. There are Muslim women who wear this out of choice, so stop disrespecting that freedom of choice https://t.co/hXketDhdUG

What was problematic with the ad wasn’t just the blatant Islamophobia, but the idea that women who cover up their bodies are inherently oppressed.

The thing with freedom is that it requires the ability to choose. In a place like Israel, where people are free to dress however they want, the choice between wearing a niqab or a cropped hoodie is the greatest of freedoms.

On the other hand, in Iran, such freedoms don’t exist. Modest dress and head covering are encoded in Iranian law. Looking through that specific lens, the words of the campaign — “Is It Iran Here?” — could indicate that the intention of the campaign was to criticize Iran’s human rights abuses, not Muslims in general. Israel and Iran have been engaged in a proxy war for decades. It’s not strange for an Israeli company to try to capitalize on distrust of a nation whose leaders have expressly wished the destruction of Israel.

But that nuance isn’t present in the powerful imagery of Refaeli ripping off the niqab. The message the ad broadcasts isn’t that Iranian law is bad, it’s that the niqab is bad — that Islam, which is practiced by 20 percent of Israelis, is bad.

It’s why the backlash was so immediate and so swift, spreading through social media faster than a niqab ripped off a model. It’s why Refaeli and Hoodies deleted the video on their respective Facebook pages. It’s why the official Facebook account for Hoodies has disappeared. Because freedom isn’t dictated by how much a person chooses to cover their body; it’s that a person has that choice to begin with. And that criticism doesn’t need to disparage a whole population of people — some of whom are Israeli citizens — who choose to cover everything up with a niqab.