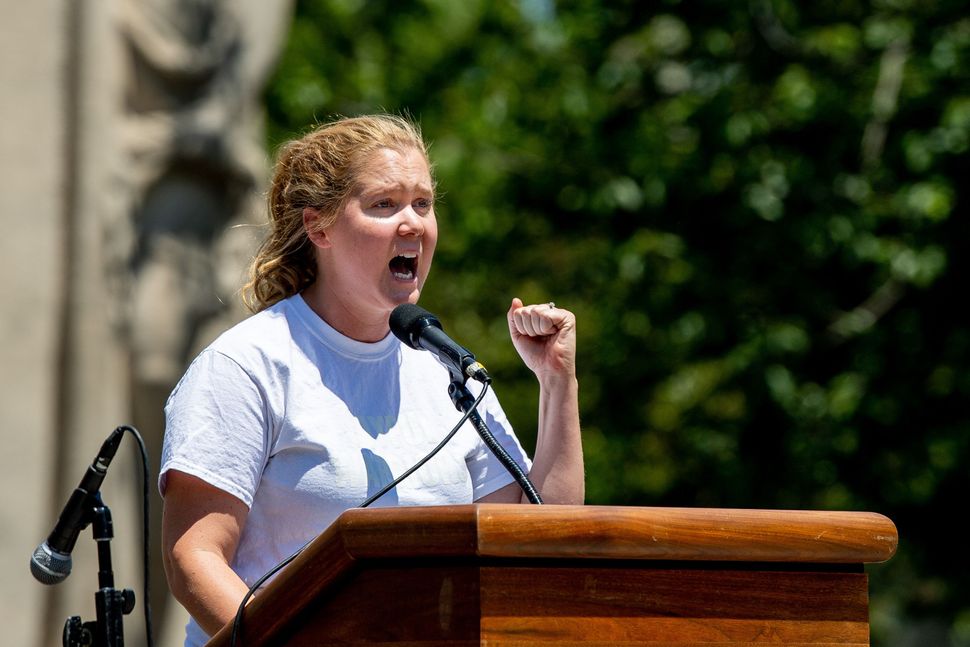 Amy Schumer, speaking at a rally in NYC Image by Getty Images

Amy Schumer has been hospitalized for hyperemesis gravidarum, a severe form of morning sickness. The pregnant actress shared on social media that she was forced to raincheck standup shows in Texas after being admitted to the hospital during the second trimester of her pregnancy. “It blows,” the 37-year-old comedian commented. “Very lucky to be pregnant but this is some bulls**t!”

Poor Amy! Growing a human inside of you is something that should come with a major cash bonus, in our opinion. Hyperemesis Gravidarum is, by all accounts, completely and totally unbearable. It’s Latin for, “even worse than you ever imagined pregnancy would be.” Hyperemesis literally means “tons of vomiting.” It’s a ramped-up version of morning sickness that entails relentless queasiness and repeated puking. Though it’s very rare, afflicted mothers usually need to be hospitalized — that’s exactly what happened to England’s Duchess Kate Middleton with all three of her pregnancies.

Texas I am so deeply sorry. I have been really looking forward to these shows. I have to reschedule. I am in the hospital. I’m fine. Baby’s fine but everyone who says the 2nd trimester is better is not telling the full story. I’ve been even more ill this trimester. I have hyperemesis and it blows. Very lucky to be pregnant but this is some bullshit! Sending so much love to the doctors and nurses taking great care of me and Tati! They are cool as hell! And Texas I am really really sorry and I’ll be out there as soon as I’m better.

Typically, it’s hard to have sympathy with multi-millionaire celebrities. But give them “tons-of-vomiting-while-pregnant sickness,” and we’re on board.

It’s also notable that while lying in a hospital bed receiving fluids for a pregnancy complication, Schumer still feels compelled to apologize profusely, extensively thank her doctors and carers, and not leave out women who are unable to conceive. It’s nice and all, but likely she wrote that post through her severe nausea and dehydration because if she didn’t, she’d be vulnerable to critical responses.

Being a woman: it’s hard, even if you are rich and famous!